It’s strange to hear a truck maker bragging about how slow a truck can go, but that’s exactly what Volvo recently showcased with a first look at the I-Shift’s new crawler gears. 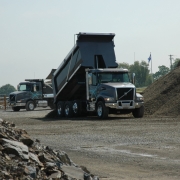 Volvo buyers are clearly embracing the Automated Manual Transmission, which is now installed in 88.8% of trucks that roll off its assembly line. But the latest option, which begins production this October, will introduce the transmission to heavy haulers pulling up to 220,000 pounds (just shy of 100,000 kilograms), as well as vocational users who are anxious to put trucks in “D” and, well, crawl around a jobsite at less than 1 km-h.

The secret comes in the large gears encased in a five-inch space at the end of the transmission. The bigger the gear, the slower it turns, and the slower it turns, the higher the available torque. That makes a difference for those who need to keep pace with paving equipment that moves 53 feet per minute, or keep a mixer’s chute inside a retriever. It also opens the possibility of allowing vocational trucks to enjoy better fuel economy at highway speeds when traveling from one location to the next.

To see what the transmission can do on the jobsite itself, an off-road track at Volvo Construction Equipment’s customer center in Shippensburg, Pennsylvania offered plenty of chances to put one of the new I-Shifts through its paces.

I was handed a Volvo VHD 200 dump powered with the 2017 version of the D13 featuring 455 horsepower and 1,750 lb ft of torque. The overdrive 14-speed I-Shift also came with two crawler gears, one with a 19.38 gear ratio, and an ultra-low version with a 32.04. Another unusual difference was the 3.21 rear axle ratio – rather than a 3.73 or 4.10 that would traditionally be needed to ensure the required startability.

It was quiet work, thanks in part to recent engine enhancements including a common rail fuel system, not to mention the High Strength Steel cab itself. There’s no need to raise a voice when talking inside, even as buckets dump 35,000 pounds (about 16,000 kilograms) of gravel on board. But when it comes to the transmission, the steady speeds and easy shifts are the things which stand out. As with every I-Shift, the new countershaft brake helps to smooth out the shifts. Even when heading through the loose dirt used to mimic a construction site, no diff locks were required.

Stopping midway up a 17% grade, the I-Shift automatically registered the payload and slope alike, switching into a Hill Start Assist mode. This holds the brakes for up to three seconds, allowing a move from brake pedal to accelerator without any worry of rolling backwards. It then pulled the truck to the crest of the hill with ease. Heading down the other side, a fully engaged engine brake kept everything under control. It worked just as easily when repeating the experiment when heading up a 20% grade and down its 27% counterpart.

Proving the truck could rock out of a mucky situation, we shifted to C2, revving up to 1,500 rpms before letting go of the button on the shift lever and launching forward. No clutch was harmed in this experiment, either.

From there it was a matter of shifting to neutral, engaging the PTO switch and – after accepting the good-natured splash from a passing water truck – unlocking the tailgate, tilting the load, and letting gravity take over.

“You take this on the highway, it runs like a highway truck. That smooth,” said John Moore, product marketing manager – powertrain. “It’s the first time we’ve ever had a chance to talk about fuel efficiency with a vocational product. If you’ve got 50 dump trucks and you’re able to save 3%, it goes a long way.”

“A lot of people want the driveability and performance of an [Automated Manual Transmission], they want their people to drive it, but up until now they’ve really not had an option to do it without using expensive alternatives with auxiliary transmissions,” he said.