COLUMBUS, IN – In a dramatic demonstration of technological agility, Cummins finished off a press conference here yesterday by unveiling its all-electric, zero-emissions class-7 tractor. Obviously, it’s a first for the 98-year-old diesel manufacturer that wants to become known as a powertrain provider, not an engine builder. It was a surprise to many, even to those of us who knew electric power was in the cards at Cummins, as well as being a small slap in the face to Tesla, which has been threatening to introduce an electric tractor next month.

Called the ‘AEOS’ electric commercial vehicle demonstrator, and built by Roush on what seems to be an International ProStar base, it’s a working 4×2 regional hauler, not just a concept shell. Cummins sees its role in vocational applications like urban delivery, port drayage, and terminal container handling.

It’s claimed to achieve over 30 miles per gallon in diesel-equivalent terms while accelerating 25-35% faster than the same tractor powered by an 11- or 12-liter diesel (depending on rear-axle ratios, of course). 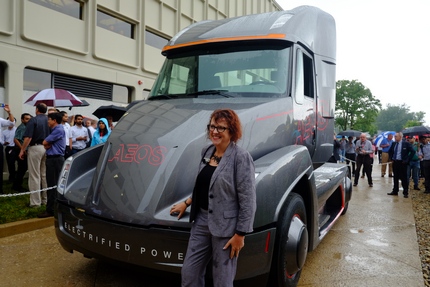 The tractor’s range is 100 miles (160 kilometers) on a single charge of its 140-kilowatt-hour (kWh) li-ion battery, but that can be extended to 300 miles (482 kilometers) with the addition of a second battery pack installed in the otherwise empty space under the hood. Charge time for the single-battery iteration of the truck is just one hour, assuming access to a 140 kWh charging station. By 2020 that’s expected to be just 20 minutes, Cummins says.

Another version of the tractor is also feasible, namely a ‘Range Extended Electric Vehicle’ with a Cummins B6.7 diesel engine acting as a generator system to keep the battery powered up. In that case Cummins would be offering an ‘Ultra-Low Emissions Vehicle’ with a 600-mile range. 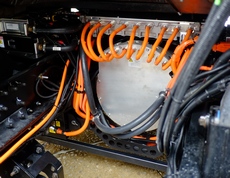 Four market drivers will dictate how quickly electric-powered vehicles penetrate the broad transportation industry, she said: the total cost of ownership calculation, the prevalence of a charging infrastructure, how quickly the technology itself advances, and regulations.

For now, electric power will be attractive mainly to ‘return to base’ operations where vehicles return to a home base at the end of the day to charge overnight.

Look for more detail on the Aeon vehicle, as well as more conventional Cummins news in next Wednesday’s issue of The Lockwood Report.