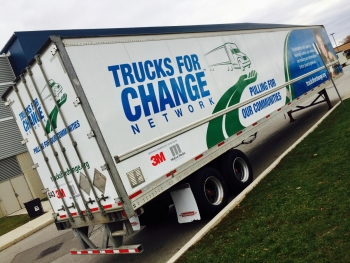 TORONTO, ON — My short-lived career as a competitive picker and packer could be in jeopardy.

Newcom Business Media, the publisher of Today’s Trucking, was the defending champion in the second-annual Trucks for Change food sorting challenge at Toronto’s Daily Bread Food Bank on November 16. Eight 10-member teams committed an hour to tear into 4,000 pounds of donated food, check expiry dates, and load boxes for shipping. (What charitable work could be closer to the trucking industry than that?) And while new to the team, I’ve helped out at food banks before. In the lexicon of athletes everywhere, I was a ringer. The trash talk flowed with ease because, well, charity and all that.

We did a lot of community good in that hour. And then we watched Bison Transport lift the champion’s trophy.

Not quite the ringer I thought I was. But I’ll be back. Maybe with a bit of training. Like spending weekends at Costco.

Fleets and suppliers support charitable efforts across the country, but Trucks for Change has found a way to match those with trucks to the charities that have goods to move.

So far, 85 industry companies have shipped 15 million pounds of food and freight, offering $258,000 in donated and discounted services. The group has also coordinated more than 800 volunteer hours toward community events such as the food sorting challenge.

“We began in 2011 with the vision that working together our industry, the trucking industry, can make a real difference by doing what we do best: trucking, moving freight,” said group founder Pete Dalmazzi, during the organization’s annual general meeting earlier in the day. “By doing that we help the charities that we work with do what they do best — which is to make a difference in our communities.” 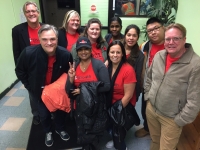 When wildfires burned through Fort McMurray, Alberta earlier this year, Trucks for Change carriers worked with Canadian Red Cross and Global Medic to deliver everything from bedding and water to other essential supplies for displaced families. Even teddy bears for children who have experienced a traumatic experience.

“Having that relationship ahead of time, being able to pick up the phone and call, meant we weren’t wasting time,” said Susan Larkin, director of philanthropy at Canadian Red Cross. “We were ready to go and you guys were ready to go. And that is huge. Time is of the essence when you have 80,000 people displaced from their homes and they’ve lost everything. They need physical support, they need emotional support, and they need the Red Cross of Canada to be there. And thanks to you guys we were able to be there as fast as we could.”

The discounted and donated truck space also continues to support a supply chain for Habitat for Humanity’s 99 ReStore outlets, which have raised funds to help build 3,000 homes that are offered with interest-free mortgages. Participating carriers have done more than move their freight, too. During three days in September, 40 industry volunteers from Erb Transport, Liberty Linehaul, Mill Creek Motor Freight, Transpro Freight Systems, Bison Transport, Midland Transport, MacKinnon Transport, Trailer Wizards and Tandet Group helped to build one of the homes in Kitchener, Ontario. 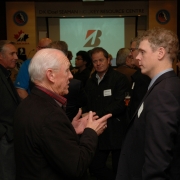 “I thought it would be a nice day away from the office,” said Sue Ann Corrighan, a credit and collections manager with Tandet Group. She learned how to swing a hammer, and the difference that Habitat can make. “We framed the best wall of that entire structure,” she added. After a few misplaced nails were pulled. But it was perfectly square.

The project even served as a teambuilding exercise for employees who don’t always work together. “We went into the build as virtual strangers and we came out as friends and colleagues,” she said. “Not only are you giving back to the community, but you’re building a stronger community within your own corporation.”

The Daily Bread Food Bank, meanwhile, knows where to turn to support as it distributes 9 million pounds of food a year. “We couldn’t do it without your help,” executive director Gail Nyberg told the gathered fleets and suppliers, noting that the food bank has only five trucks of its own. “We know if we call Trucks for Change, you’ll be there.”

There is plenty of work behind the scenes to make that happen, of course. It’s certainly where Dalmazzi prefers to focus his efforts. When the former Ryder executive wants to describe the difference made by Trucks for Change, he turns to carriers. When asked to pose for a photo, he points to board members. “I’m not that guy,” he says, shunning the flash. Every time he steps to the mic, he is focused on how everyone else in a room is doing. Is everyone comfortable? Everybody OK? Does anybody need a chair?

But he still steps into the spotlight whenever he has the chance to promote the cause. Because he hopes Trucks for Change will expand further.

“We’re just beginning,” he said, referring to how most participating businesses are still based in Ontario. “Part of our goal is to take this across the country.”

Because Trucks for Change will do you good.