Preliminary Class 8 truck orders came in at 17,600 units in June, marking a 7% improvement compared to May and 38% spike year-over-year, according to FTR.

The industry forecaster said June’s bounce-back from a surprising May retreat is in line with expectations. The market continues to perform at a steady pace and is consistent with summer’s seasonal trends, FTR reported. Orders for the past 12 months have totaled 216,000 units.

“The June orders confirm that the market just took a brief respite in May after several stronger than expected months,” said Don Ake, vice-president of commercial vehicles at FTR. “The orders are right where we expect them to be and on track with our forecast.  The fact that orders are up 38% over last year, proves the market is much improved this year.”

He added: “Fleets are ordering to fill out their remaining requirements for the second half of the year.  However, it is still good news that orders rose and did not drop significantly from May. This shows the market is steady, stable and primed for a strong year in 2018.”

ACT Research reported Classes 5-8 net orders were 37% higher year-over-year, at a seasonally adjusted 43,000 units. Classes 5-7 orders were up 28% year-over-year in the second quarter, ACT reported, but down 6.5% compared to the first quarter of this year.

“While orders are weak relative to year-to-date activity, June’s orders were up 39% compared to last year,” said Kenny Vieth, president and senior analyst at ACT Research. “Because of a deep seasonal trend that runs through Class 8 orders, seasonal adjustment provides a significant boost to June’s orders. When adjusted, the June volume rises to 20,200 units.” 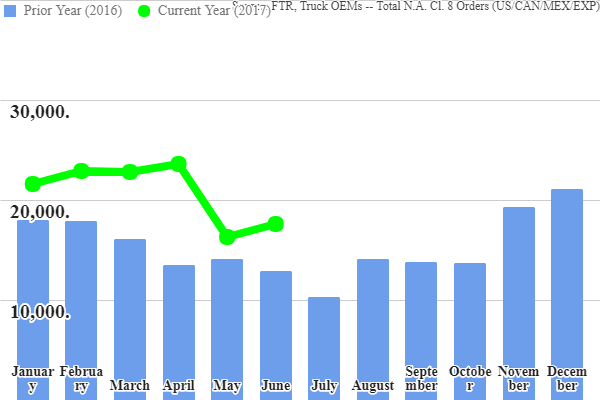