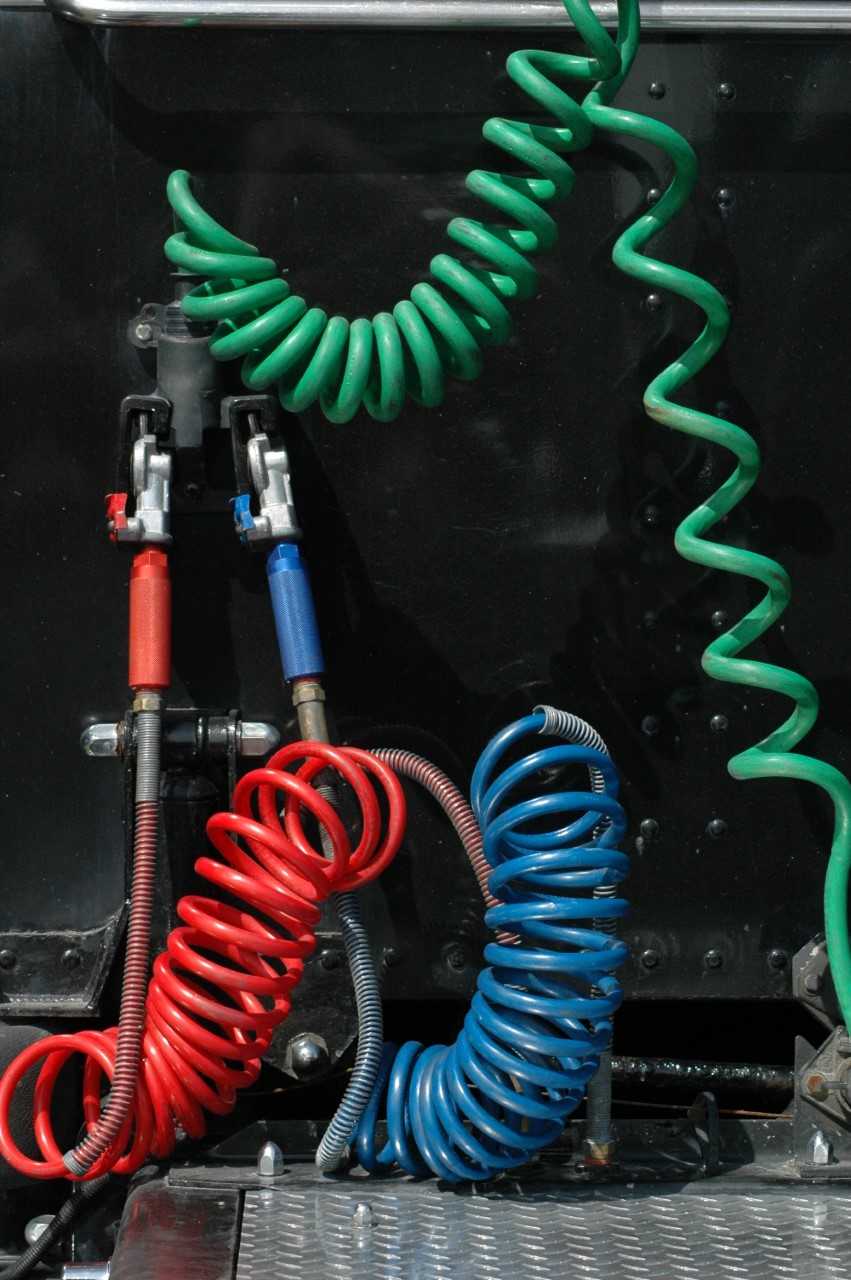 Admit it. A truck’s air system probably isn’t your most pressing maintenance concern. The systems are pretty reliable, and beyond changing the air-dryer desiccant cartridge every couple of years, you probably don’t give the rest of the system any more attention than it absolutely needs. While its primary function is supplying air for the brake system — an important task in its own right — other components on the truck need air, too. Automated transmissions, for example, and certain emissions system components.

Most brake valves are fairly tolerant of oil contamination, but equipment like automated manual transmissions (AMTs) often have air-operated solenoid valves, which are very sensitive to both oil and water contamination.

“Over the past three to five years we have a seen a shift in OEM requirements from simply needing dry air to needing a higher quality of air,” says Richard Nagel, director of marketing and customer solutions – air charging, at Bendix. “The oil contamination issue is becoming more pressing because of the high adoption rates of AMTs. With more of them on the market, the contamination problems are becoming more apparent.”

This will probably drive fleets to pay closer attention to air system components, particularly the compressor and the air dryer. There will always be some oil in the compressor discharge air, and moisture. The idea is to trap it before it travels too far downstream, where it might do some damage.

“The first place it goes is into the air dryer, contaminating the desiccant material,” says Nagel. “That’s why air dryers lose efficiency.  The desiccant does not expire or get used up, but it can become saturated with oil and it will no longer be capable of removing moisture.”

Even though the compressor might be the problem, fleets are more likely to change the cartridge and service the air drier more frequently because that’s much less expensive than replacing the compressor. That can be a six-to-eight-hour job, plus the cost of the compressor.

For linehaul applications, most OEMs and air dryer manufacturers recommend replacing the air dryer cartridge every two to three years. The air dryer cartridge on vocational vehicles such as garbage trucks should be changed much more frequently, says Abe Aon, director of sales, Wabco North American aftermarket. “It’s critical to use the correct type of replacement cartridge, which is either standard or oil coalescing, depending on the air dryer’s specifications.”

Some fleets can go longer or shorter between cartridge changes than others due to the climate they run in, the amount of air they use, or the age of the vehicle, Aon says. “Older vehicles tend to have more air leaks and compressors that pass more oil.”

Any sludge produced by a slobbery compressor will eventually wind up in tractor air tanks, so that’s where the inspections should begin. In humid conditions, it’s not unusual to see as much as a cup of water collected in a tractor’s wet tank if the air dryer isn’t working or is contaminated with oil. Drivers should monitro how much water and oily sludge comes from the tank when it’s drained.

“We don’t recommend completely draining all reservoirs every day,” says Aon. “Pulling on the drain cord or opening the drain cock for just a few seconds is a good indicator of the overall health of the air system.”

With a good dryer, premium desiccant, and proper air temperature going into the air dryer, most daily checks will result in nothing coming out of the reservoirs. However, if water or a water-and-oil mix are noticed on a regular basis, then check the system for air leaks. The Technology and Maintenance Council’s Recommended Practices 619B is a great resource for recommended checks, requirements, and troubleshooting hints when something is “not right.”

Operators should also monitor the frequency with which the compressor cuts in and out, or the air dryer purges, whichever their ear is tuned to. At idle with no brake applied, most compressors and dryers shouldn’t cycle more than once every two or three minutes.

If the compressor cycles more frequently — known as short-cycling — conduct a vehicle walkaround and listen for air leaks. Repair any leaks that are found. If releasing the spring brakes or holding a brake application significantly increases the frequency of the cycling, there may be a seal leak or brake chamber diaphragm leak that is wasting air while driving or at every brake application. Fix these as soon as possible or as required to avoid any possible violations, Wabco’s Aon advises.

“A tuned-in driver is the best defense to keep a small problem from becoming a big one,” he says. “The driver is with the vehicle all day, every day, while the mechanic may only see the vehicle for a few minutes. The sooner the driver reports that something is not right or misbehaving, the sooner the maintenance technicians can correct a problem before it becomes an issue on the road.”

Often left neglected in off-site drop yards, trailer air systems may be the most vulnerable to winter freeze-ups. It doesn’t matter how hot the load is, if the trailer brakes are frozen in minus-40 temperatures, the truck isn’t going anywhere.

“Our shops perform annual air drier services on all trucks in the fall — replacing desiccant cartridges, testing heater elements, servicing purge valves — and we also purge the trailer air system,” he says. “We drain the air tanks and run a vaporizer on the emergency side to push vaporized air-line antifreeze through the system. We also make sure that the trailer gladhand rubbers have the closed grommets in place to help keep water and snow out.”

Siemens cautions that only an approved airline antifreeze should be used — no coolant, rubbing alcohol, methyl hydrate, or anything else that could potentially contaminate the air system. “Our goal is to keep the air system as dry as possible, and not flush away any OE grease/lubricants in the valves,” he says.

Should you find yourself with an unresponsive, frozen trailer air system, Siemens suggests pouring two ounces of airline antifreeze at a time into the supply (red) side. Build the truck air pressure to 100-120 psi and apply service brakes several times with the park brakes released. Wait 15 minutes, and if air system is still frozen, try again. Open the petcock on the trailer air tanks to drain excess airline antifreeze. But only do this when you are experiencing problems and not as a daily preventive measure.

If you’re stuck with a trailer where the wheels won’t turn when you release the parking brake, the brake linings could be frozen to the drum. In this case, use a hammer to tap the top and bottom of the drum – but not the linings — several times. The vibration should break the ice holding the lining surface to the drum.

“Our maintenance personnel put on annual training courses for the Paul’s Hauling drivers to provide them guidance, tips, and tricks in operating their equipment,” Siemens says. “These sessions always touch on the air systems.”

Here’s one more winter tip that could save some grief. Before shutting down on a cold night, first fan the brakes to drop your air pressure below the governor cut-in pressure (about 90 psi). That way, Siemens explains, “if air system freezes, at least air compressor is charging and building air pressure when you start the truck. This gives a slightly better chance that the unloader mechanism in the air compressor does not freeze or stick in the unloaded position [pumps no air], which is far more common and is cause for a service call.”

Oil never used to be a big problem in truck air systems. We hardly gave it a second thought four or five years ago. Now we have to worry about it.

“Historically, people repaired the equipment when there was a problem,” Nagle says. “But going forward, I think we’ll need more proactive maintenance on these systems.”

If you know what to look for, air systems usually telegraph all sorts of warnings before they up and quit on you. Often drivers are more likely to see these symptoms before the shop does, so it’s good to get them into the maintenance loop to help forestall a breakdown. Here are a few things to watch for that could be warning of an impending problem.

It all starts here, including much of what can go wrong with the system. Here’s what to watch for:

If it takes an abnormally long time to build system pressure, check for restrictions in the intake or discharge lines, watching for other symptoms. Check for system leaks, an inadequately sized compressor for the application, air-dryer purge valve stuck open, or a defective compressor unloader mechanism and/or governor.