One new feature of Western Star’s most popular truck model is the availability of Cummins’ new ultra-lightweight X12 engine.

“The 4700 has always been all about providing customers with the choices that are best matched for their exact business needs,” said Samantha Parlier, vice-president of Western Star marketing and product strategy. “Our new powertrain options expand the adaptability of the already versatile 4700.”

The Cummins X12 offers up to 1,700 lbs.-ft. of torque and 500 hp. The engine is compatible with several fully-automatic, automated manual, and manual transmissions.

The Detroit DT12 automated manual transmission is another new option for the 4700, and can now be spec’d for Detroit-powered models. The DT12 features creep mode, hill start aid, and a pneumatic shift and clutch control.

“This is a significant improvement in the overall ergonomics of the driver package,” said Peter Arrigoni, vice-president of sales for Western Star.

Western Star announced the enhancements to the 4700 today during World of Concrete in Las Vegas, Nev.

During the show, Parlier highlighted how improved routing and clipping techniques to wiring harnesses on the 4700 was one area the Canadian market had requested.

“Canada is incredibly unique in that in general it’s colder the U.S. and they use a wide variety of chemicals on the roads, and all those chemicals get into those wiring harnesses and corrode them like no other,” said Parlier. “We see corrosion in Canada at rates that exceed anything we’ve seen in the U.S.”

Parlier said the routing, clipping, and the wrapping of the harnesses without using the plastic tube is “incredibly beneficial.”

Preparing for the improvements to the 4700, Western Star held a meeting with its western Canadian dealer principals to see what Canadian-specific improvements they wanted to see.

“That’s where the wiring really came true, was in that western Canadian region,” she said.

Arrigoni highlighted several “refreshments” to the interior of the 4700 aimed at helping drivers stay focused on the road and be more productive. 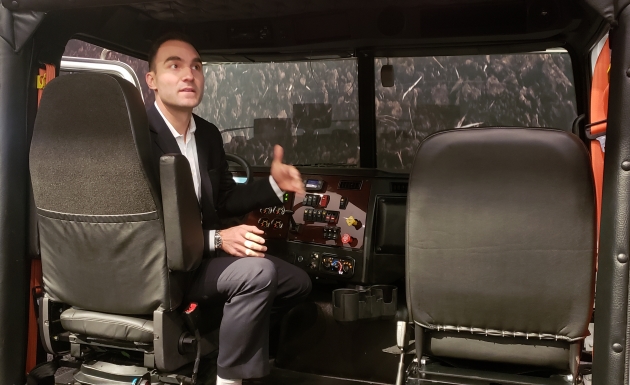 All of these steering wheel functions come standard on the 4700, something Arrigoni said are optional with many other OEMs.

“We think that given the number of controls and how they interface with the wheel is important, so they come standard,” he said.

“We worked directly with customers to create an environment that drivers can customize to best meet the needs of their specific job and lifestyle,” added Parlier. “From dash-mounted USB ports for personal mobile devices, to a variety of mounting and pre-wire options for telematics systems, the 4700 is easier than ever to operate.”

The 4700, for the first time, can be spec’d with a 40-inch low or ultra-low roof StarLight sleeper, or utilized for extra storage space.

To enhance safety while operating the vehicle, the 4700 can be equipped with Wabco OnGuard, which uses bumper-mounted radar units to track nearby vehicles and objects, automatically applying the brake if necessary.

Bendix lane departure cameras are also available on the 4700.

Parlier said aside from having to meet any differing regulations in Canada from the U.S. – like daytime running lights – Western Star does not restrict anything from Canada, meaning all the new enhancements to the 4700 are available north of the border.

She added that most of the improvements Western Star announced today during World of Concrete will come standard on the 4700.

Parlier told Truck News-West that Western Star has an incredibly high market share in Western Canada, specifically in B.C. Much of this success is attributed to the relationship its dealer network has with upfitters and bodybuilders.

But as with many businesses in Western Canada, Alberta’s struggling oil and gas industry has had an impact.

“It’s interesting how tied in to the economy the oilfield is,” said Parlier. “It can create a new town overnight, and you think about all the freight that has to be moved to support that – new housing, new developments, new infrastructure. That has been a bit of a rollercoaster the last few years.”

An Edmonton dealership has opened a new, improved location, and in Fort McMurray, a brand new dealership opened earlier this year.

“Our dealers are investing heavily in their areas,” said Parlier. “And that is being supported by tremendous growth in some of the areas in Western Canada.”

Parlier said in B.C., Western Star enjoys as high as a 30% market share, “which is staggering, because we’re 9% overall in Canada.”

Construction and forestry has pushed much of Western Star’s market share in B.C., which Parlier said has been strong on the West Coast for the past few years.

“What we’re really seeing in our dealer network is a focus on diversifying their business,” she said. “Where you had a dealer or customer base that was exclusively oilfield, they’re taking a look at what else with the volatility of the oil market.”

With orders coming in at a record pace, Parlier said Western Star will “stay strong” in 2019 and will enjoy building on its success of the past two years.