MISSISSAUGA, Ont. – The new Mack Anthem made its Canadian debut at Truck World, decked out in a proud Canadian livery.

Orders for the new highway tractor have exceeded expectations, Mack officials announced. Stu Russoli, highway product manager for Mack Trucks, said customers are seeing a 3% fuel economy improvement thanks to the tractor, coupled with an up to 8.8% improvement when spec’ing a GHG17 Mack engine with turbocompounding, when compared to the previous generation product.

“That’s an automatic improvement, without changing any other spec’s,” Russoli said.

The Anthem boasts an all-new interior, with a raised roof and more ergonomic placement of switches. A new configurator at Build.MackTrucks.com allows customers to design their own Mack Anthem.

“In the end, you can send that to your dealer, post it on social media for your friends, or print it out,” Russoli explained. “It gives you a starting point so when you go talk to your dealer, it jumpstarts the whole sales process. It’s nice to be able to see your colors on there and what different components will look like.”

Russoli also explained Mack Connect – which brings together all of Mack’s connectivity services. One of the newest of these is the ability to offer over-the-air software and parameter updates. Russoli said Mack has, since October, has provided over-the-air updates to 6,000 vehicles.

Dayle Wetherell, regional vice-president for Mack Trucks in Canada, was excited to bring the new Mack Anthem to the Canadian market.

“The star of the show is the Mack Anthem,” he said. 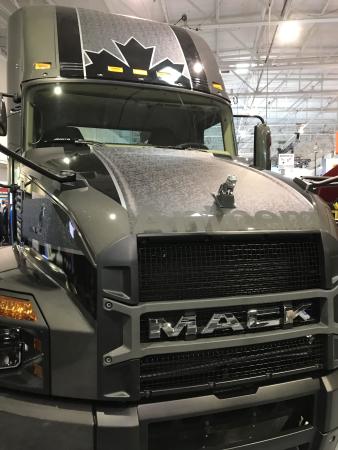 “It was quite a bit higher than what we originally thought it would be, and it’s still trending strong right now,” Wetherell said.

Truck makers are seeing their longest industry order backlog since 2006, and it has been growing for seven consecutive months.

“There has been tremendous excitement from customers to the Anthem,” said Wetherell. “Our orders are surpassing expectations.”

He noted he saw his first Anthem on the highway near Kitchener just days before Truck World.

Wetherell also commended dealers for improving their facilities and service. There are now 120 Mack Certified Uptime Centers, including nine in Canada. By adopting best practices and dedicating bays to an initial triage inspection and focusing on doing quick jobs first, these dealers have shown a 21% reduction in repair times. The Certified Uptime Center concept began in the Toronto area.