SAN DIEGO, Calif. – Mack is adding an extended chassis fairing with integrated step to its Anthem, which the company says will improve fuel economy by an additional 0.5%.

It brings the total fuel savings available from the Mack HE+ package to 10% over a standard spec’, the company says. Mack also announced availability of a cloud-based electronic logging device (ELD) through Geotab. There’s no hardware to install and no device pairing needed via Bluetooth or WiFi. This will be available for order in the fourth quarter, while the fairing is available now.

“We can say we’re seeing the cooling off (in orders), and that is not a surprise,” he said of the Class 8 market. “The economy is normalizing from what we saw were some fairly significant numbers in growth.”

But he also said manufacturing growth is recovering and housing starts are strong. Construction spending is stable. But as orders slow, the industry is working through a sizeable backlog. Randall said truck makers are burning through inventory thanks to strong retail sales.

The Class 8 truck market in the U.S., Canada and Mexico is expected to total 325,000 units this year, up from the 300,000 to 310,000 Mack initially projected early in the year. Randall said the market will cool to “typical demands.” But an official forecast won’t be released until later in the year.

“We still view the construction segment, refuse, the dirty truck segment, being very strong next year,” said Randall. “From a historical standpoint, it’s going to be a pretty good market overall.”

He anticipates the longhaul market will feel the worst pain in 2020, while construction, cabover, and day cab offerings see healthy demand. This year, linehaul accounted for 48% of the total Class 8 market, which Randall expects to decline to 43-44% next year.

“That’s good for Mack,” he said. “Those are good core segments for us and we will still continue to compete with the Anthem in the linehaul segment.”

Randall said a “normal” Class 8 market represents about 250,000 units, so next year should still be a good year for truck makers.

Mack continues to advance its electric LR refuse truck, and will put its first into service in New York City in January. A second will be delivered in the first quarter of 2020, and Mack plans commercialization soon after.

Mack also continues to roll out its over-the-air parameter and software updates. It has now been used on 13,500 vehicles with an average update time of 20 minutes. Mack says this has eliminated nearly 4,000 days of downtime. 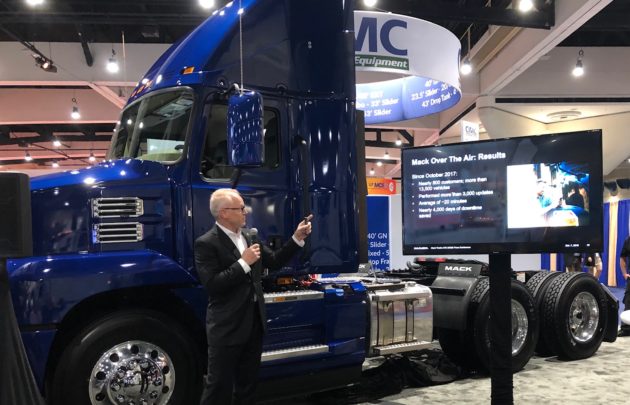