BIRMINGHAM, Ala. – Autocar has announced the launch of two truck models for the concrete and construction industry.

The Autocar DC-64M for concrete mixers and the DC-64P for concrete pump applications represent a completely new conventional truck that was designed specifically for those applications, Autocar announced.

“The new DC models are the result of extensive input we received from our advisory board of concrete professionals,” said Eric Schwartz, managing director of Autocar Trucks. “Every inch of these trucks has been reviewed and improved based on the decades of experience of people operating concrete mixer and boom pump trucks. We’re grateful for their help and proud to bring to this market trucks that are honestly customer-built.”

The cab is built from a combination of steel, aluminum and corner castings designed to withstand punishing work. The workspace of the cab was designed for productivity and to accommodate drivers of all sizes. A wide, raked windshield optimizes visibility, according to the company.

They also feature high-strength 160,000 psi steel frame rails, which Autocar claims are 24% stronger and lighter than the rails on competitive trucks, eliminating the need for frame liners on nearly all mixer applications.

“This breakthrough results from the requests of mixer operators who were frustrated by corrosion caused by moisture and muriatic acid penetrating the gap between frame rails and liners,” said Tom Harris, vice-president for concrete mixer trucks with Autocar. “We’ve routed air lines and self-cleaning electrical harnesses on separate sides of the frame rail to make service easier. But even more importantly, everything is mounted away from the frame rail channels where concrete and liquids accumulate, so that will avoid additional problems we’ve all had to deal with before.”

An interior display notifies drivers or technicians of faults and offers one-touch diagnostics that show them how to fix it.

“It’s a game-changer that gets trucks back into service and making money faster than anything anyone has had before,” said Harris.

The new models are available with the Cummins X12 engine with up to 500 hp and 1,700 lb.-ft. of torque, with additional engines to come in the future. Allison transmissions are available. Autocar says it has already taken firm orders, which will be delivered in the spring.

Additional details are available at: www.AutocarTruck.com/my-new-truck. 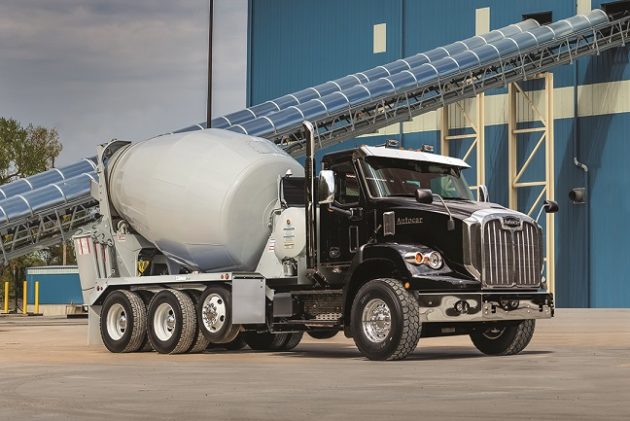