“Order volume was soft in April for the second straight month. Several factors appear to be in play. OEMs continue to be reticent to fully open 2020 orderboards. This is evident in our measurement of the extent of the industry’s backlog, which has remained in the November or December timeframe throughout the first four months of 2019,” said Frank Maly, ACT’s director of commercial vehicle transportation analysis and research.

“While we hear comments of some fleets anxiously awaiting the chance to snap up 2020 build slots, some also appear to be evaluating their existing commitments. Cancellations in April were the highest since August 2016 on both a unit and percent of backlog basis, and have remained elevated since December. That resulted in an interesting dichotomy in April orders; while new orders were actually up versus March, cancellations were significant enough to pull the net order number into the red month-over-month.”

“We expect the backlogs to remain very healthy, supporting continued high build rates,” said Don Ake, vice-president of commercial vehicles with FTR. “Orders likely will stay at low volumes through the summer, or until OEMs open the 2020 order boards. OEMs have been cautious about taking longer-term orders due to uncertainty over future costs. Right now, the Chinese tariff situation is just adding to an already cloudy outlook.” 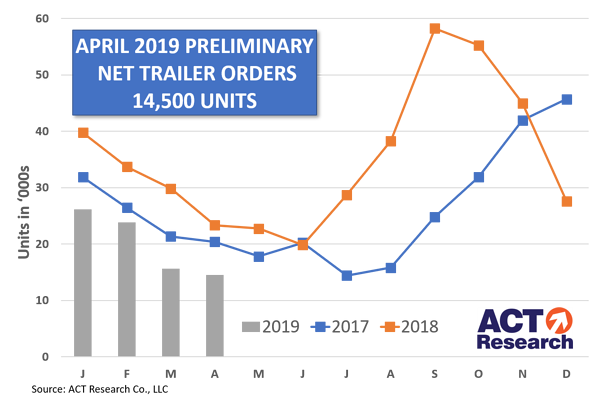