ACT Research’s State of the Industry: U.S. Trailers report, indicated near-record backlogs have filled 2019 build slots for many manufacturers, and there is some resistance towards booking orders into next year.

“While some fleets have fulfilled investment plans for the year, others reportedly are seeking more equipment this year,” said Frank Maly, director, commercial vehicle transportation analysis and research at ACT Research. “However, their efforts will likely be in vain, with dry van and reefer orderboards consuming most available production slots for the year.”

Maly added, “Factory inventory was a mixed bag across categories, but most unusual was reefers, up 60% year-over-year and at the highest level in our historical database, which started in 1990.” Further, the report noted that while the cancellation rate continued at acceptable levels, the high backlog, at 7.5 months, helped disguise higher cancellation volume. Cancellations have averaged more than 2,300 per month for the last four months, the longest string of higher volume months since the mid-year 2016 market inflection. 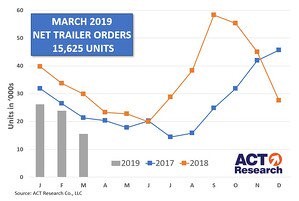