Eric Starks, CEO of FTR, also chalked the decline up to uncertainty stemming from the trade war with China and other political issues.

“When you’re a business decision-maker trying to decide, ‘What should I be doing?,’ when that uncertainty enters, you say ‘I’m not doing anything’,” Starks said.

While manufacturing is flat, the data doesn’t reflect a recessionary environment, but rather a correction, Starks said. And consumer spending remains strong. FTR’s tracking of monthly freight loadings has flattened out, but there’s no downward spiral that should spark concern, Starks noted. 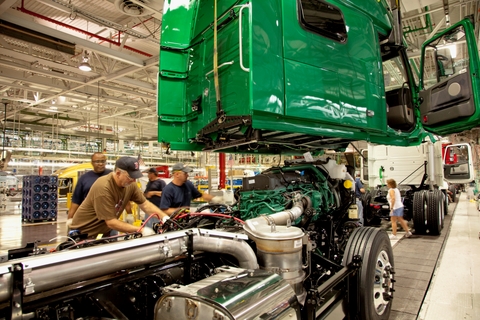 “The market continues to be relatively healthy,” he said. “We are seeing a normalization within the market.”

The spot market has seen rate declines, but remains relatively healthy, and above the five-year average, Starks pointed out. FTR is projecting freight growth of 1% to 1.5% through the balance of this year and next.

Don Ake, vice-president of commercial vehicles for FTR, reiterated that the Class 8 truck market is coming off some tremendous years; four of the top seven production years ever have occurred within the past six years. The Class 8 production rate this year is forecast to reach 353,000 units, compared to 323,500 last year. The all-time record was 2006, when 371,000 trucks were built, aided by the EPA07 emissions pre-buy.

But there’s no hiding the fact Class 8 orders have plunged since the highs set in the fourth quarter of 2018.

“If looked at in a vacuum, you’d think things are horrible,” Ake admitted. However, he noted if the 2018 and 2019 monthly order numbers were to be averaged out, they’d still come in above the seven-year average.

“The market is trying to get back to normal,” said Ake. And he’s also encouraged by the fact there’s been no spike in cancellations. “I thought once we got into mid this year, we would see cancellations spike. What we saw was cancellations increase, but not spike. (Customers) are taking most of these trucks, which is a very good sign for the market. It’s a normalization of the market, not a crash of the market.”

Class 8 retail sales and build rates also remain strong, but Ake said most OEMs have announced build rate slowdowns. Backlogs are being drawn down, but remain at historically high levels. Ake said October will be an important month for orders. It’s reasonable to expect 20,000 Class 8 orders a month in the coming months, Starks said. Truck inventories are high, meaning retail sales will need to pick up to prevent unhealthy inventories for dealers.

Starks added 245,000 units is about equal to replacement demand.

“Trailer forecasting is tough and forecasting trailers in 2020 is enormously difficult,” he said. “You thought the truck market was great over the last few years, the trailer market was even better. Five of the top eight trailer production years occurred in this cycle.”

There were a number of variables driving strong demand for trailers, including pent-up demand (many carriers hadn’t refreshed their trailer fleets since the Great Recession). Other factors include: an increase in drop-and-hook operations to get drivers home more often; consumer demand for faster deliveries of a greater variety of foods, increasing refrigerated van demand; an increase in temperature-controlled freight; a more widespread use of dry vans for storage; and even Amazon building its own fleet, rumored to amount to 25,000 trailers this year alone. Ake is anticipating some weakening in the trailer market over the third and fourth quarter.

What are fleets thinking?

“Those types of fleets control about 40% of the Class 8 vehicles out in the universe,” she said.