WASHINGTON, D.C. – Many of the improvements built into the newest Volvo trucks and powertrain can be traced back to the US Department of Energy’s US$20-million SuperTruck project. Volvo made the revelation when it took the wraps off its SuperTruck at a press event this morning in Washington, D.C.

Examples of enhancements that were developed on the SuperTruck and carried over to Volvo’s production vehicles include: a new aerodynamic bumper; flared chassis fairings on the VNL 630 and 670; and an aerodynamically enhanced roof for the 670. Airflow through the engine compartment has also been optimized.

As for the powertrain, Volvo’s new patented wave piston design was validated on the SuperTruck, as well as its new common rail fuel injection system and turbo-compounding, which Volvo is rolling out on its D13.

The US Department of Energy gave Volvo $20 million to work with and the truck maker matched the funding, and then some. The goal was to improve freight efficiency by 50%, but Volvo exceeded that, bettering it by 88%. It also reduced vehicle weight compared to a 2009 model year VN by more than 3,000 lbs, reduced drag by 40% and improved fuel economy by 70%. Nyberg said testing routinely showed the SuperTruck achieving more than 12 mpg while loaded and with some additional tinkering it has now surpassed 13 mpg.

“We thought we had a tough goal of 50% improvement when we started the project but the project has delivered 88%, which is quite impressive,” Nyberg said at the unveiling.

Volvo has secured an additional $20 million in funding for its SuperTruck II project, which targets a 100% freight efficiency improvement compared to that same 2009 baseline. However, Nyberg explained the second project requires truck makers to demonstrate a one- to two-year payback on technologies used to get there, so it will have to eliminate some of the costlier systems that were deployed on the first SuperTruck.

“SuperTruck was a chance to look into the future as a truck manufacturer,” he said. “It gave us the possibility to look at what was coming and really start analyzing some of these trends we’re picking up on.”

Amar said the project began from the rear, with an analysis of the trailer and how the tractor interacts with it. Volvo chose to work with an existing trailer design rather than something more futuristic such as a teardrop-shaped trailer.

“We didn’t want to go too crazy and design something that wouldn’t be realistic,” he noted.

Volvo worked with Ridge Corp. to design an aerodynamic gap fairing, side skirts and tail fairing.

“Once we had the most aerodynamic trailer we could find, we went on to what that meant for the tractor,” Amar explained.

A lesson learned along the way was that the relationship between the tractor and trailer was more complex than first thought.

“We found things that we thought would help the tractor be more aerodynamic but they would only help if the trailer was a certain way,” Amar explained, citing a lower front bumper fairing as one example that didn’t pan out.

Volvo maintained its existing steel cab structure, but repositioned it. The cab sits about three inches higher and eight inches further forward and has a shorter hood. The rear cab wall was widened to better direct air around the trailer. The front grille was rounded slightly, the bumper made curvier.

With truck aerodynamics addressed, changes to the powertrain were required. The sleeker truck sliced through the wind more easily and as a result, required less power to push it down the road. Volvo opted for a D11 engine.

“It’s really about right-sizing the powertrain,” Amar said. “Picking the size of engine that is just right for this truck so we can operate the engine where it’s efficient in the sweet spot.”

The Volvo powertrain achieved 50% brake thermal efficiency, compared to the baseline of about 42%, meaning about 50% of the fuel used is now converted to usable power.

Weight was reduced through the use of lighter-weight materials. The aluminum frame, for example, is 45% lighter than the 2009 production steel frame. But designers didn’t just swap out steel for aluminum, Amar stressed.

“The novelty is in how they used the material,” he said. “They designed the frame to take advantage of the properties of aluminum.”

The frame alone shaved 900 lbs out of the vehicle. A total of about 4,700 lbs was taken out, but the installation of new technologies put back about 1,500 lbs, resulting in a net weight savings of 3,200 lbs. While carbon fiber is known for its lightweight characteristics, it’s also known for its high price tag. Volvo sought alternative materials that were less expensive than carbon fiber.

The company also considered the driver. It designed a fully-integrated hotel load power system that provides temperature control and power for 14 hours without idling or depleting the batteries. Volvo studied telematics-derived data to see how its trucks are being operated over the road and tailored its system to reflect these realities. Two belt-driven alternators engage when the truck is travelling downhill, is accelerating and slowing down and use this energy to keep the batteries fully charged throughout the drive cycle. When the driver stops, a full 14 hours of power and climate control are available.

The bunk windows were scrapped, because Volvo found they were a source of heat or chill loss. But a solar panel on the roof powers LED lights inside the cab that give the appearance of natural daylight. A hot air extractor on the roof also spits out hot air from inside the cab, keeping the inside temperature comfortable.

The SuperTruck was shown to US Energy Secretary Ernest Moniz, who seemed genuinely impressed by the result. But despite exceeding the goals laid out through the project, Amar said Volvo isn’t calling it a day.

“Testing hasn’t stopped,” Amar said. “Our contract with SuperTruck 1 ended in June, but we haven’t stopped working on it. We keep finding new improvements and keep testing things. We have a lot of ideas we want to throw at it for SuperTruck II.”

The second SuperTruck project will build on lessons learned during the first project, but will result in a completely new truck. And because all technologies used must demonstrate a quick payback, it’s likely the second project will also see improvements carried over to production trucks. 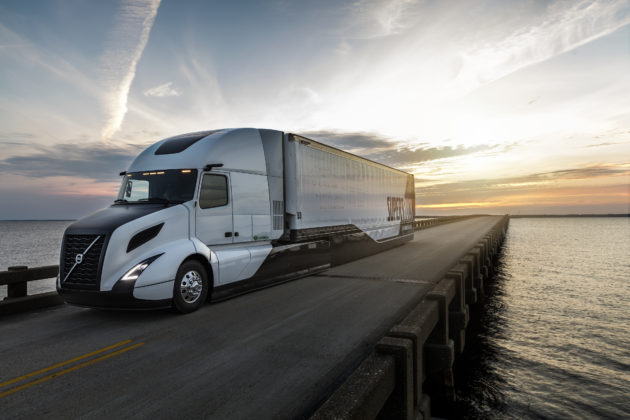