SURREY, B.C. — The B.C. Vintage Truck Museum will hold its fifth annual Truck and Tractor Show and Shine July 7, but it was not long ago the organization was facing a conundrum – the partial loss of its long-time home.

The museum, which opened in May 2012 and houses 27 trucks and numerous pieces of related memorabilia, is run by the Surrey Heritage Society and was started by a group of Cloverdale men who leased a building owned by the City of Surrey. 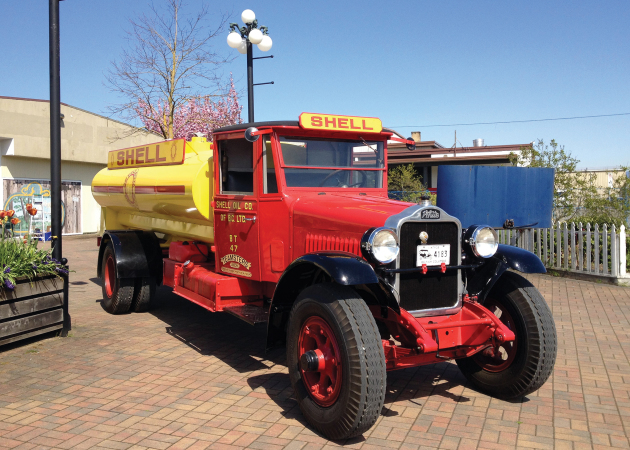 The building was built in 1958 and includes the original 1881 city town hall, which has been closed to the public for more than 12 years. With the city considering moving the town hall to the Surrey Museum as part of its museum expansion project, the Vintage Truck Museum was in line to lose a large portion of the space they occupy in the building due to demolition.

Dismantling of the building was to commence April 30.

However, as Anna Dean, secretary of the Surrey Heritage Society for the museum, pointed out, the historic building has since been discovered to be designated as a heritage site and cannot be destroyed.

“Although this has given us a reprieve, we are still bound by a short-term lease that could be terminated at any time,” said Dean. “We are working with the city to find a new forever home in the immediate (vicinity). We are considered to be a cultural, heritage, and economic benefit to our community and we are confident that the city will assist us with our long term goals.”

The museum holds quite the collection of rare trucks, including a 1929 White Model 59 Shell tanker that was part of Shell Oil’s Vancouver, B.C., fleet that transported fuel to local gas stations. The truck, which boasts a 29-hp, four cylinder engine, was restored in 1986 by Shell Oil of Canada, a collaborative effort by staff of the B.C. Provincial Museum, Shell Canada, White Trucks, and others.

The museum’s 1935 Dodge Airflow is the rarest vehicle in its possession. Driven from California to Vancouver and purchased by Standard Oil in 1935, the truck was retired in 1947 and had its tank removed.

“We are presently restoring this truck but have never been able to find an original replacement tank,” said Dean. “As far as we know, there are only four Dodge Airflows left in the world. Ours is the only one that came to Canada and is also the only 1935 left.”

The main collection of trucks at the B.C. Vintage Truck Museum is known as the King Collection, as they belonged to Bob King, who owned several trucking companies. After closing the businesses, King stored his trucks from 1957 to 1972 before they belonged to other owners throughout the area. They were then turned over to the Surrey Heritage Society in 2012 for safekeeping and legally transferred to the society in 2017.

“Our goal is to preserve the early history of trucking in British Columbia,” Dean said. “To preserve this priceless collection and share it with the public.”

Part of this effort includes the unveiling of a new mural installed on the exterior of the museum this past March.

The mural depicts an image from the Surrey Archives of five Model 130 Fageol “Flyer” trucks parked in front of the City of Surrey Hall in 1912. The four-cylinder vehicles were purchased as work trucks in the 1930s and had a top speed of 35 mph. The photo was taken less than a kilometer from where
the B.C. Vintage Truck Museum sits today.

“Below the mural stands three historic markers of the Pacific Highway, which opened as a gravel road in July 1913,” said Dean. “The highway, which connected New Westminster to the U.S. border, was a major connection route and an important trucking route to this day.”

The museum is funded by donations, grants, corporate and individual sponsorships, and fundraising efforts, such as the July show and shine.

In 2017, the society received a Canada 150 grant to expand the truck museum, allowing for the addition of eight extra vintage trucks that had been in storage.

“These trucks were parked in various barns, backyards, and garages in the area and we were concerned they were deteriorating,” said Dean.

The expansion also added more space for memorabilia and A improved wheelchair access.

Those attending the show and shine will see trucks ranging from the early 1900s to the most recent big rigs, as well as a silent auction, live entertainment, food, and a yard sale table.

“The variety of trucks makes this event interesting not only for truck enthusiasts but for everyone,” said Dean. “We have many stories to tell at the museum of how our trucks helped develop this province for the benefit of all.”

The show and shine will be held at the Cloverdale Fairgrounds, July 7 from 10 a.m. to 4 p.m.