WINNIPEG, Man. — Manitobans looking to receive funding for a Class 1 driver training course are in luck.

It wasn’t long ago that Manitoba provided no clear funding path for aspiring truck drivers, but the province has done a complete 180 to help get more qualified drivers behind the wheel. 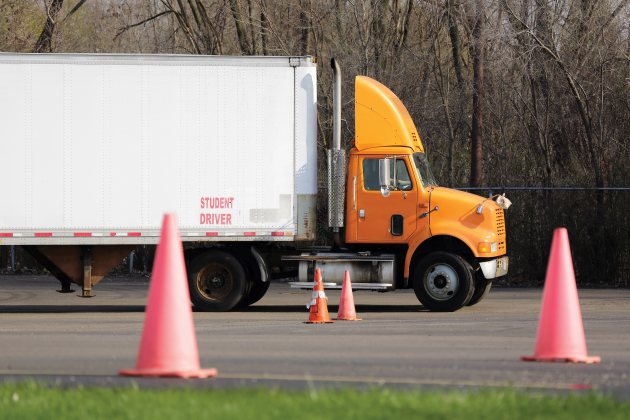 Under the new program, any Manitoban who has a document stating an offer of employment from a “certifying partner” carrier is eligible for full funding through the Manitoba government’s education department for a Class 1 driver training course from an accredited school.

Various reasons, such as being a single parent looking to be home every night, an inability to cross the border, or a tarnished driver’s abstract, would prevent companies from hiring many of these Class 1 drivers.

“We saw a lot of people saying they wanted to be truck drivers who never really had any chance of being a driver,” said Shaw, “so the government invested previously in training people who never ended up being employed.”

This muddied the water of the Class 1 driver pool, as they were technically able to work, but were not economically viable as drivers to carriers.

“This program provides a clearer path to employment for the employer and employee,” said Shaw, “because they’ll know before they invest a lot time training to be a truck driver whether or not anybody will actually consider employing them.”

Manitoba has been a long-time supporter of Ontario’s mandatory entry level training (MELT) program, but has had to deal with its own unique hurdles in the past when it came to driver training.

Shaw said unlike any other province, Manitoba faced a unique challenge in that its apprenticeship program, that supports trade professions, is publically funded.

Those looking for work were given the choice of paying $200 to become a carpenter or welder, but were forced to fork over around $9,000 for a driver training course, as it was not recognized as an apprentice trade.

“For years we have been trying to get truck driving, nationally and provincially in every province, recognized as a trade in some fashion and get some sort of certification,” said Shaw, adding that under the apprenticeship program, funding applicants had to work in the trade prior to receiving funding, something truck drivers simply cannot do.

“We said that we’re already seeing enough competition and now you’re providing us with an even more un-level playing field by picking and choosing winners when it comes to trades training,” Shaw said, a sentiment the government agreed with.

Funding to those with an offer of employment is now available through the province for the 240-hour Class 1 training course to the National Occupational Standard.

“Before it was only open to low income (applicants),” said Shaw. “We’re happy to try and help those people but if someone is a bus driver and is retired and they want to come and drive a truck now, that shouldn’t limit them.”

The MTA does offer information on which carriers are hiring anyone looking to get behind the wheel and pursue employment and the new provincial funding.
Though the association is not receiving any portion of the funding, they are more than willing to lend that helping hand.

“We help them have a legitimate understanding of what it is they’re going to be doing,” said Shaw. “Not that we want people to shy away, we want people to come in informed so they’re not wasting their time or the employer’s.”

The provincial government will review the program during its budget talks in April 2019, but with no cap on the funding, the MTA is not concerned the money will run out.

“As long as industry comes to the table, takes advantage, and provides on-the-job training opportunities, I see no reason why the government wouldn’t want to continue investing in the training,” said Shaw.

Companies that participate in the program, successfully train on the job, and employ for six to 12 months (depending on the company’s size) are also eligible to receive funding through the new program – $3,000 per driver for 12 consecutive months of employment.

“Not only do we get better funded candidates as funded by the government, we get rewarded for employing them successfully for 12 months in a row,” said Shaw. “It’s money we get paid for doing our job.”