REGINA, Sask. — Congestion on Victoria Avenue. Endless traffic lights and then a left turn on the Trans-Canada Highway. Even though it already had a ring road designed to mitigate traffic headaches, Saskatchewan’s capital was due for some infrastructure treatment and the result looks nothing like a facelift.

The new Regina four-lane bypass promises to make the western Canadian city’s heart beat stronger than ever and the trucking industry will largely benefit from this rejuvenation.

When it opens October 2019, the new highway will circle the city and connect its east and west, while being a means to bypass the city itself for truckers who simply need to go through Regina without stopping in it for a pick-up or delivery. The total infrastructure investment – the largest in the province’s history – is estimated at $1.88 billion, the lion’s share being funded by Saskatchewan. Forty kilometers of new highway and service roads, plus 10 interchanges and three new intersections will make life easier for truckers and motorists alike. In fact, parts of it are already in service as construction progresses. Truckers and trucking companies planning to use the area roads can dial 511 to get updates on what gradually opens.

Regina experienced a real boom in population and e 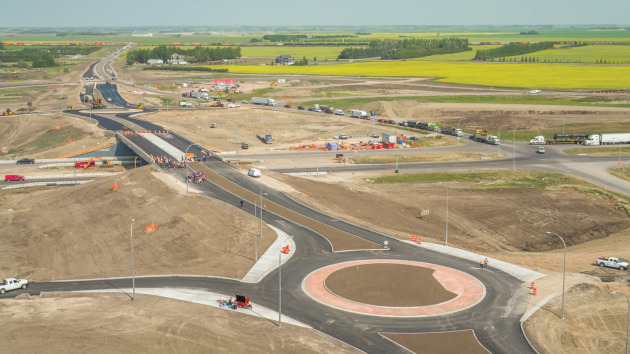 conomic activity over the last years and oil prices were only part of the equation.

“There was definitely a lot going on in the resource sectors that led to the boom, but the government also worked really hard on increasing the population of Saskatchewan, so there was a lot of contributing factors,” said Nicole Sinclair, policy analyst at the Saskatchewan Trucking Association (STA) when referring to the exponential growth in car and truck traffic in Regina over the last decade.

According to Sinclair, the traffic situation was becoming bad enough to jeopardize safety in some areas of Regina.

Al Ackerman was born and raised in Saskatchewan and has been living in Regina since 1991. He also happens to be president and owner of Slinkemo Enterprises, a 22 truck and 100 chassis container drayage and regional transport operation headquartered in the city. He chuckles when talking about the current and “famous” left hand turn on the Trans-Canada Highway.

“That’s not our favorite thing to be known for,” he said, adding that it illustrates the current lack of ramps to ease traffic flow on and off highways in the Regina area.

The good news, he believes, is that this kind of awkward situation will soon be history.

“In and around Regina, it will be quite exciting because the bypass will allow road speed exits on to all the major highways that leave the city,” said Ackerman. “There will be no more stop lights and this and that, it will just be exits and ramps.”

Slinkemo Enterprises is actually located in the Regina Global Transportation Hub (GTH), an inland port for intermodal transport that opened in 2013 after Canadian Pacific relocated its facilities from its former downtown Regina setting. That other piece of infrastructure has been great for Regina’s economic development but also had side effects.

“That increased truck traffic in the west portion of Regina significantly,” said Sinclair. “About 500 trucks every day go in and out of the Global Transportation Hub. That created a traffic flow issue that didn’t previously exist.”

Sinclair also points out that the GTH is not located right on the highway.

“That was causing issues because there were large trucks traveling the fastest way to the Global Transportation Hub, actually through the city of Regina, which obviously wasn’t ideal,” she said. “The bypass is also addressing that issue.”

This is why the CEO of the Regina GTH and former 15-year veteran of the Yanke Group of Companies, Bryan Richards, welcomes the new highway with open arms. The GTH is hoping to attract more industries for sections of land that are still available, which Richards believes could generate more truck traffic and in turn be a source of general wealth through higher amounts of collected taxes.

“This project (the bypass) is a game changer, no question,” said Richards. “It has been anticipated to support this inland port. That access to the national highway network was critical. It has been planned from the inception of this particular facility.”

Richards added that the bypass will provide “direct access to not only the Trans-Canada but Highway 11 North to Saskatoon, Edmonton and easing the congestion on the east side of Regina by more direct access to Highway 1 from Winnipeg.”

Ackerman, too, identifies the bypass as a vital link between Regina and other Western Canada urban centers. The way he sees it, Regina could well become the new trucking hub of the Prairies.

“If you leave Calgary and you want to be in Winnipeg tomorrow morning, you’ll need a team outfit, whereas from Regina you can be in Winnipeg or Calgary overnight, single driver,” said Ackerman. “Once this bypass is open, all those major cities in Western Canada are accessible overnight.”

With ELDs coming soon and every minute saved per trip representing profit for a trucking company, such a centralized location could tip in the scale, especially if paying only one driver instead of a team.

The bypass will also allow drivers going in or through Regina to do so with greater peace of mind.

“It’s more stressful to drive in congested traffic than on the open highway. Your drivers are working harder mentally,” said Ackerman, underlining that some of his drivers currently lose about 30 minutes per trip at a rate of three or four trips a day on Highway 33 leaving Regina.

This traffic stress burden being taken off the drivers’ shoulders could even help retention and reduce turnover, according to Ackerman.

“Our focus on retaining employees is always about making them the most productive they can be, because trucking as an industry has a long history of paid by productivity,” he said. “This bypass is going to have a significant impact on the uncontrollable of traffic because it’s going to make the flow much simpler for our guys. Unless we are delivering in the city, it is going to eliminate our trucks’ need to go into the city to get to their destination.”

Richards can relate to that city avoidance.

“When I ran a trucking company in this province, I didn’t even allow truckers to fuel in Regina because you lost them for too long a period of time,” Richards said.

“By the time they came into town, went to the cardlock and exit back out, you lost a couple of hours. So they had to bypass Regina for fuel.”

Richards adds that the new highway was designed with trucking in mind, including long combination vehicles (LCVs) and free flow access within five minutes from the GTH.

Sinclair agrees on the “trucking friendly” aspect of the bypass.

“It will make everything easier for truck traffic. Right now, Victoria Avenue East, I would say is the bane of a trucker in Regina’s existence,” she said. “It’s heavy, heavy traffic, it moves at very slow speed and there’s a lot of lights. That has been a problem route for the trucking industry for a long, long time.”

“The government and the private companies that are involved in it have been great at consulting the trucking industry every step of the way,” Sinclair continued, adding that the construction authorities “made sure that every detour and re-routing have been accommodating every configuration that Saskatchewan allows and they’ve taken into account that there’s heavy trucks everywhere and that they need to access certain areas. It’s been great. We’re really excited for it to be finished.”

In the late ’60s, Richards used to drive to Calgary to visit family.

“And here we are (today) still making the same left hand turn that I did in 1969,” he said