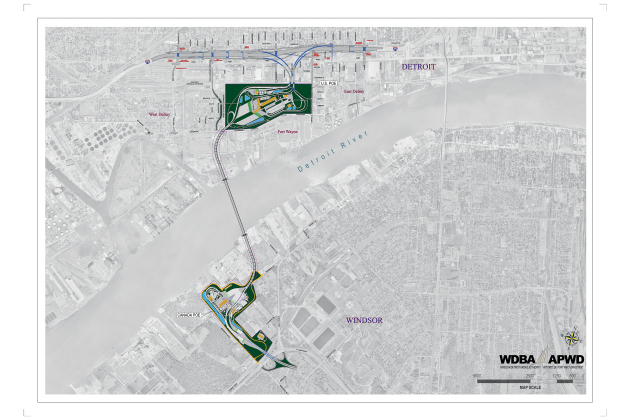 WINDSOR, Ont. — The processing of commercial traffic will be a priority when the new Gordie Howe International Bridge opens in late 2024, officials with the Crown agency overseeing the major infrastructure project linking Windsor and Detroit say.

“We feel one of the most important aspects of this project is for trade and commercial uses,” Tom Middlebrook, spokesman for Bridging North America, the consortium that will build and operate the bridge, told a news conference here Sept. 28. “Designing for commercial users has been an absolute pivotal requirement.”

The news conference was called to announce the financial close of the contract between Bridging North America and the Windsor Detroit Bridge Authority (WDBA), the Canadian Crown agency overseeing the construction and future operation of the bridge. The official price tag of the new bridge was also announced: $5.7 billion.

Preliminary construction is already underway but the main construction work, starting with foundation and pier builds, gets underway later this fall.

Improving commercial traffic flow has been at the crux of almost two decades of planning for the bridge, with notorious truck backups sometimes now stretching kilometers along a city street, Huron Church Rd., or in the U.S., along I-75 and I-96 ramps and service drives, leading to the existing Ambassador Bridge.

The new six-lane, 2.5-km Gordie Howe will instead offer seamless freeway-to-freeway links connecting Hwy. 401 to I-75, both major trade corridors.

As a result, advanced technology will be incorporated into the bridge design as well as the new massive ports of entry, which will contain Customs and tolling areas, “all with a view for mobility for commercial use,” Middlebrook said.

As well, unlike the Ambassador Bridge, the new bridge will accept hazardous materials.

Currently, Haz-Mat must be transported by the Detroit-Windsor Truck Ferry, whose owner, a supporter of the Gordie Howe bridge, has said he fully accepts he will be out of business once the bridge opens.

Haz-Mat currently can also be transported across the Blue Water Bridge between Sarnia and Port Huron, 90 kms to the north.

Middlebrook said oversized loads on the Gordie Howe will also be accepted, and “there’s agri-food considerations incorporated in the design with the U.S. Food and Drug Administration and Canadian Food Inspection Agency; they’re going to be located in the facilities.”

The new cable-stayed bridge, with a 125-year lifespan, will be wide enough to expand to eight lanes, and will feature ports of entry (POE) that will be as large as 53 hectares on the Canadian side – the largest in Canada – and 68 hectares on the U.S. side. They will have 24 Canadian and 36 American inspection booths, flexible to handle both cars and trucks.

The current Ambassador Bridge, built in 1929, and which itself is planning a replacement span, is now the largest trade crossing between the two countries, and sees almost one quarter of commercial transport. Some 7,000 trucks cross each day, or 2.5 million a year. In 2017 more than $173 billion in bilateral trade passed through Windsor-Detroit.

The Gordie Howe bridge obviously poses a threat to the Ambassador’s toll revenues, but despite numerous court challenges, Ambassador Bridge management has been unable to stymie the Howe’s development.

Middlebrook said with the Gordie Howe bridge the benefit for truckers would be reduced wait times, bypassing municipal roads, fewer intersections to cross, and “convenient customized payment mechanisms” including expedited processing for e-manifests.

Tolling rates for the bridge have yet to be determined but the WDBA will set “competitive tolls” for all vehicle classes, WDBA spokeswoman Heather Grondin said.

The non-profit WDBA won’t receive the toll revenue but it will be passed through to the government of Canada.

Grondin said “extensive consultation” will take place with bridge users “to get a sense of what rates we should be setting the tolls at,” and consultations will begin “in a few years.” She said rates at other border crossings will also be examined.

But Grondin said the “key advantage” of the Gordie Howe is in its “connectivity” freeway to freeway, and ports of entry will feature dedicated truck lanes.

As far as Haz-Mat, truckers will use the standard permits used at all crossings.

“We’ll be following all of the standard Department of Transportation and Ministry of Transportation requirements for safety,” Bruce Campbell of Parsons, the WDBA’s engineering consultant, said. “There are some limited materials that require what we call a closed bridge permit. Those are very few in number and it’s actually fairly easy to execute that on a border crossing, you just hold the tolls for a short period of time and you give them (trucks) some space. But they’d have to go through a permit process so the operator would know that they’re coming.”

In the final analysis, Campbell said, the project will be a game changer.

“The wonderful thing is, we’ll have a six-lane bridge, so we’ll be able to have fully dedicated lanes for both NEXUS (cars) and FAST vehicles so you can’t get stuck behind other traffic.”