Deal Or No Deal?

March 1, 2009
TORONTO, Ont. - At this time last year, the soaring value of the Canadian dollar was making the purchase of a new truck an attractive proposition. 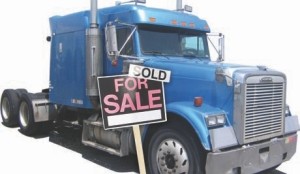 FOR SALE: Dealer lots currently have a good selection of used trucks and many dealers are willing to be flexible to move them.

TORONTO, Ont. – At this time last year, the soaring value of the Canadian dollar was making the purchase of a new truck an attractive proposition.

Now that the loonie has settled back at its traditional range, however, the pendulum seems to have swung back in favour of used trucks if you’re looking for value in an upgrade.

Many truck dealers were overvaluing trade-ins when the dollar was peaking last year, leading to an abundance of inventory and providing for some good deals today, if you’re in the market.

“There’s a tremendous amount of used inventory on the ground everywhere,” says Jeff Watson, assistant sales manager with Moncton, N. B.-based Valley Equipment. “There’s a lot of inventory and a lot of dealers are willing to be flexible on selling a used truck.”

“You can have a foreign exchange rate that will affect the price of a new truck $30,000 either way,” he says. “It’s never a bad time to buy used. You don’t have that volatility; all you have is the market swing.”

The used truck market seems to have settled after a wave of repossessions last summer flooded truck dealers’ lots.

Many owner/operators were getting “buried” in debt when financing their rides and were unable to survive when freight began to dry up.

“We had a lot of repossessions coming back last year, but not so much this year,” says Dennis Sheehan of Volvo dealer Sheehan Truck Centre. “I think the weak have fallen and the strong are surviving.”

Many of last year’s victims had financed expensive trucks

with little or no down payment, Sheehan says, adding “I think the credit market has straightened that out somewhat.”

Watson says overzealous customers, eager finance companies and unscrupulous dealers all played a part in “burying” many owner/operators. It would happen something like this: an owner/operator with an eight-year-old truck wants to trade it for a five-year-old truck, however he still owes $30,000 on his current rig. The truck that caught his eye costs $50,000, but the dealer is only willing to give him $15,000 for his trade-in.

If there’s a silver lining to the credit crunch, which has made it difficult for many fleets and owner/operators to fund new equipment purchases, it’s that there are fewer financing companies willing to bury a customer.

“The credit (crunch) is preventing those who shouldn’t be in (the industry), from being in,” says Turchet.

“It’s a little harder to get financing and interest rates are a little higher now than they were,” Watson adds.

“Interest rates (in general) have dropped, but the perception of risk is higher than it used to be, therefore finance companies are looking for some extra security in the form of extra interest and sometimes extra down payments.”

Now, more than ever, customers should ensure they have a minimum down payment of 10% and finance companies may require 15% if it’s your first truck.

Turchet warns customers to be honest when filling in their credit application.

“If you’re looking for credit, you should not give misinformation of any capacity in order to get the truck,” he insists. “Being honest is the number one key.”

Next, customers should buy a truck they can afford. In an uncertain economic environment, every dollar you can shave off a truck payment provides that much more flexibility for when business slows down.

“Every dollar you’re financing for five years is going to cost you $1.50 – that’s less money in your pocket to get you through the lean times,” Watson points out. “Sometimes, guys simply can’t afford what they want.”

Once you’ve determined your price range and the type of truck you need for your specific application, the next step is to deal with a reputable dealer.

“Sometimes, you get these so-called dealers – curb-siders that are flipping trucks and they aren’t registered,” Sheehan warns. Reputable, OMVIC-registered dealers are required to disclose information about a truck’s history, such as whether there’s a lien against the vehicle or whether it’s been involved in an accident.

Ross Babula, sales manager with Tatro Equipment, adds customers should insist on verifying a truck’s mileage by checking the engine control module (ECM) data rather than trusting the odometer reading.

“There’s no way you can take mileage out of the ECM,” he says. Dealers that are members of OMVIC are required to do this, Sheehan points out.

Turchet says when shopping for a used truck, don’t make a buying decision based solely on price.

“Price isn’t always the best part of a deal,” he says. “You need a partner, that one: has what you want; and two: stays with you over the life of your truck.”

A good dealer will want to maintain a relationship with you after you drive your truck off the lot, Watson points out.

“Whether selling a new or used truck, the main objective of any reputable dealer is always to match the truck as close as possible to what a customer wants. If you do that, you have a happy customer and you sell him another truck down the road,” he says.

Some dealers, such as SelecTrucks, will accept a vehicle back within the first 60 days if it doesn’t drive the way you expected. Most also offer extended warranties, although Sheehan admits they may be costly.

“Extended warranties aren’t for everybody,” he says. “Some guys want the thing covered from front to back and don’t care what it costs, but if they’re going to pay $3,000-$4,000 for the warranty, in some cases it’s better to put it in the bank.”

If you are in the used truck market, it may be a good idea to begin shopping long before you actually need to upgrade.

Watson says savvy owner/operators will ask their dealer to be on the lookout for a certain truck/engine combination months ahead of a planned purchase.

“It gets them first dibs on buying a truck that has a certain engine they like, that they’re familiar with and that they want to buy,” he explains.

Pulling out of the dealer’s lot in a used truck may not be as glamorous as buying one fresh off the assembly line, but with a good selection available at reasonable prices and in an uncertain freight environment, it may be worth taking a look.

Whether you’re an owner/operator or a fleet that’s looking to explore the viability of a new lane, operating used trucks can generate as much revenue as a new truck and leave a little change in your pocket for when the going gets rough.