I spent a few days last week in Detroit talking integration with the Daimler Trucks North America (DTNA) folks. They took the wraps off the new Integrated Detroit Powertrain (IDP), which features the Detroit DD15 engine, DT12 automated mechanical transmission and front and rear Detroit axles, available in 6×2 or 6×4 configurations. Even the 6×4, officials claim, will improve fuel mileage by about 5% compared to today’s Freightliner Cascadia Evolution. Among the enhancements is a new six-blade fan which is more efficient to operate than today’s nine-blade version, resulting in less parasitic loss (and quieter operation, to boot).

This product launch was an important milestone for DTNA for a couple of reasons. First, it has been looking to fully realize the benefits of vertical integration since Daimler bought Detroit Diesel back in 2000. Over the past couple years it added the DT12 automated transmission and Detroit axles to its portfolio, bringing true integration one step closer to reality. Next, it needed to optimize those components to work together and it has now done that with the release of the IDP. 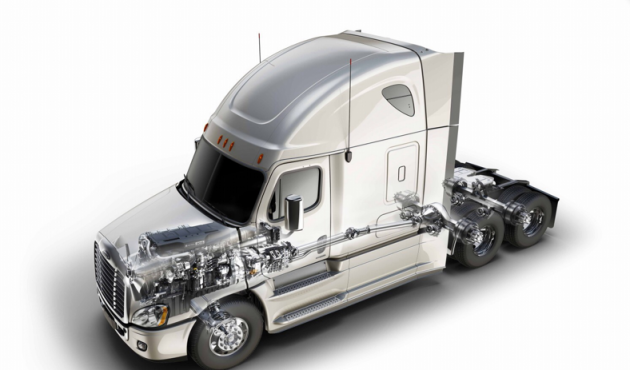 The new powertrain uses downspeeding for further fuel economy gains. The engine is rated at 400 hp/1,750 lb.-ft. and can cruise at 63 mph at 1,200 rpm, compared to about 1,350 rpm before. The IDP is expected to appeal to a customer base that is evolving. Brad Williamson, manager, engine and component marketing with DTNA, explained to us that fewer truck buyers today are gearheads who wish to pore over a databook and build the truck to their own specification from scratch. Those guys are being replaced by fleet owners who consider themselves businesspeople first, and will gladly defer to the OEMs to point them in the direction of the most efficient vehicle available. And Daimler feels its new integrated powertrain will fit the bill for most of those buyers looking for a mainstream linehaul spec’.

The other reason this is an important development for Daimler is because it has allowed it to meet a self-imposed target of improving its own fuel efficiency by 5% every two years. DTNA did it with the introduction of the Cascadia Evolution a couple years ago and says it has repeated the feat with the new integrated powertrain. It’ll be offered on the Cascadia Evolution in January 2015 and the yet-to-be-launched Western Star 5700 later next year. Click here for a more detailed report. And stay tuned later this year when I hope to have a chance to drive a Cascadia Evolution spec’d in such a manner.