SASKATOON, Sask. – The province’s motto may be ‘Strength from Many Peoples,’ but for Ray Milne, co-owner, president and CEO of RDK Transportation, success has come from Saskatchewan’s diverse economy, a solid customer base and staff that go that extra mile. 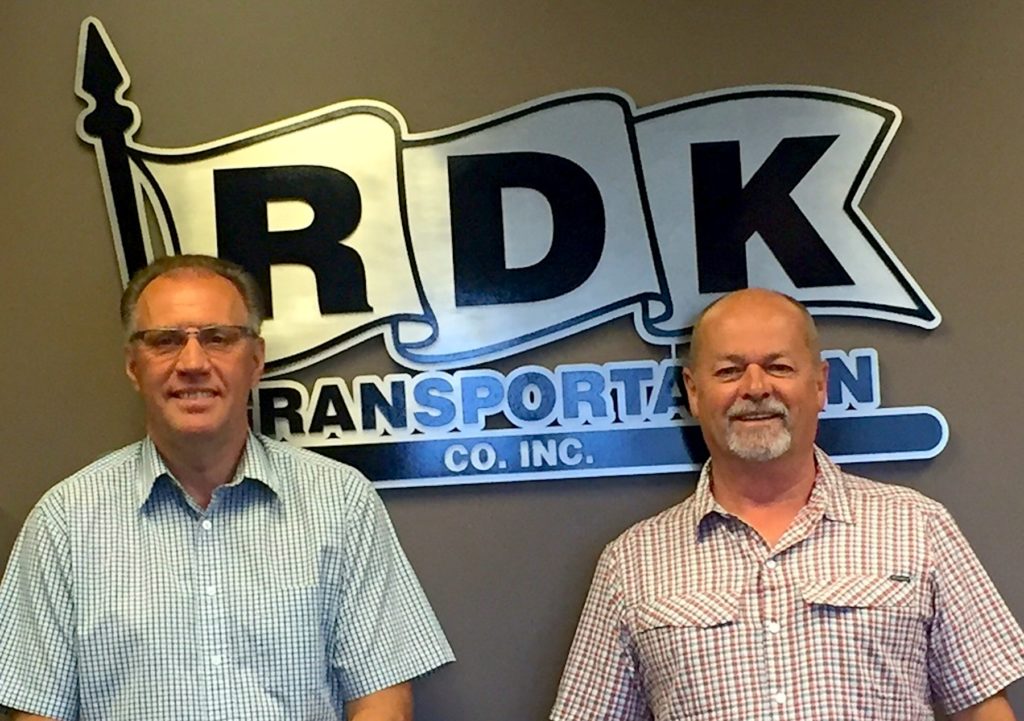 Along with Milne, who started the company in 2004 with two partners who have since departed, Rod Freisen co-owns and is vice-president of RDK Transportation, coming on board in 2013 and bringing a wealth of trucking industry experience with him for the ride.

But it’s not just Milne and Freisen who have made the business a success; like many small trucking companies, family has been a big part of it.

“The company has a number of family members who work here,” said Freisen, with co-owner Ray being his brother-in-law, Ray’s wife Kerri the office manager, Sean Freisen, Rod’s son, heavy haul and dispatch and Julie Freisen, Rod’s wife, doing a bit of everything, as a few examples.

“Julie came in to help out with various admin areas in the company,” Rod said, “so she really has no specific position other than you can always rely on her being there to help.”

Julie said both Ray and Rod, in addition to managing previous trucking companies, come from owner-operator backgrounds and have always maintained the principle that ‘drivers come first.’

“The operators who join the company know on a load-by-load basis what they’re being paid. When times are slow, they know the office team has been doing their best to provide the freight to be hauled.”

Julie said her husband emphasizes to drivers that they are the sales people on the road, and their professionalism is what represents RDK, drives advertising and brings repeat business.

With more than 75 owner-operators and company drivers, along with around 30 office and yard-based employees, RDK has grown over the past few years, expanding its fleet and customer base.

And, despite the recent economic downturn in neighboring province Alberta, those at RDK believe the ‘Land of the Living Skies’ offers enough diversity to keep the company moving forward.

“Saskatchewan’s economy has been able to stay fairly strong through the western downturn in the oil industry,” Julie said. “Although freight has been harder to achieve, the young energetic staff has been able to work through these hurdles and keep the freight moving and the operators on the road week after week.”

“RDK is in a good position to weather the slowdown in the oil and gas sector due to the fact that we are very diversified and have a large loyal customer base that we strive to keep up with,” Ray added.

Saskatchewan’s economy has been affected by the drop in oil and gas prices, but like Julie and Ray pointed out, has been able to endure the downturn better than Alberta.

In June, the Saskatchewan government announced the province’s May unemployment rate had fallen to 6%, down from 6.3% the previous month, second lowest among all provinces and lower than the Canadian average of 6.9%.

The government also said there were 2,200 additional people working in May compared the month prior, which it said suggested the employment market may be stabilizing.

“Resource sector challenges have hit Saskatchewan’s labor market,” said immigration, jobs, skills and training minister Jeremy Harrison. “However, we are optimistic as forecasters predict our economy will begin to recover in the coming year. In last week’s budget, we made the choice to control spending, invest in people and invest in infrastructure in order to keep Saskatchewan strong as our economy begins to recover from low resource prices.”

Julie said the RDK team’s strong connection is one of the biggest reasons they have seen ongoing growth through the economic slide.

“Pulling together and working together has seen many obstacles having been worked through,” she said.

Customer value and appreciation is also a key priority for RDK, with scheduling and daily load location being relayed to customers, as well as after-hours communication to ensure loads that need to be hauled are shipped. The company’s fleet is satellite equipped, which provides tracking and information on all deliveries to its customers.

“A company’s growth is only as strong as the efforts employees put in making things work no matter how difficult the load may seem,” Julie said. “Management and staff can sometimes be seen sitting together and making things work out with ideas from the oldest to youngest team members.”

Safety is another key for RDK, with fully trained drivers who are provided with classroom and on-site training and testing by qualified staff. The company’s equipment is serviced and maintained by technicians and subject to an internal maintenance plan.

But treating everyone like family is what RDK is all about.

“Our company is on a first-name basis with everyone who comes through the door,” Julie said. “Management is always available to talk to every driver…the phones are open 24/7 to hear any concerns.

“(This) young team is growing and facing many situations that will see the company grow and prosper into the future.”