January 1, 2000
TORONTO, Ont. - Canadians are going hungry and Aynsley Morris has 231 pallets of free Kraft Dinner. She just has to get the food bank staple to them.While the donated food is sitting in a Montreal war... 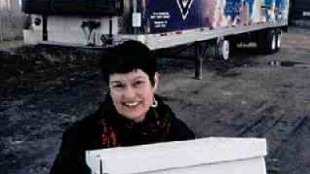 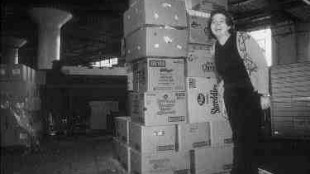 TAKE-OUT: Aynsley Morris has food for Canada’s hungry. She just has to get it to them. (Photo by John G. Smith)

TORONTO, Ont. – Canadians are going hungry and Aynsley Morris has 231 pallets of free Kraft Dinner. She just has to get the food bank staple to them.

While the donated food is sitting in a Montreal warehouse, Morris needs to get it to Toronto so it can be distributed across Canada. In fact, the white board on her wall is covered with details about donations of everything from baby food to soup that are supposed to go to the nation’s hungry.

Such are the quandaries of the national operations manager for the Canadian Association of Food Banks, which distributes larger corporate donations of food to the 168 food banks under its umbrella.

Morris relies on donations from Canada’s carriers to stock the shelves.

“Without the transportation, the food does not do us any good,” says Morris. But with the help of a list of 22 carriers, she managed to ship 10 million pounds of food last year.

Still, the need for donated truck space is becoming more desperate, just as the need for the services of food banks continues to grow. This March, 790,344 Canadians didn’t have enough food to eat and turned to a food bank for help, marking a 10.8 per cent increase over 1998.

“It’s pretty dire. It’s getting into a situation where we’re starting to pay for things we can’t afford,” says Julia Bass, executive director of the Canadian Association of Food Banks. “We’ve been going into the hole. We’ve never had a year where we’ve had so much food we couldn’t move it.”

Ironically, it’s relatively easy to move large quantities of donated food from Toronto to Vancouver. That’s moved by Canadian Pacific Railway. “But we can’t get the food to the rail yards in Toronto,” Morris adds. And there’s a need to shuttle more food between Toronto and Montreal, and into outlying communities around the country.

Both association officials are quick to stress the value of donated trucking time, by owner/operators or carriers.

“That goes straight to their bottom line,” Bass says. “It’s actually a bigger gesture in some ways than the food industry.”

The food is donated by its makers for a variety of reasons. Sometimes too much is ordered, there is a mistake in the packaging, best-before dates are approaching, or it’s a flavor that hasn’t been embraced by shoppers.

“Most of that food used to go to the landfill,” Morris says.

For truckers, the space in the trailer means lost revenue. But it also means a chance to give back to the community.

“We just work it into the system,” says Bill Balan of Trans-Provincial Trucking, based in Sault Ste-Marie, Ont. “It’s a very good cause and it’s something we can help with … the transportation of goods is obviously something we can do. We’re just doing our part.”

The carrier has been doing its part for more than four years, handling about one shipment per month.

Erb Transport of New Hamburg, Ont. offers refrigerated service for deliveries around Ontario. About a third of the donated weight is perishable.

“In the dead of winter, we have shipped by a regular truck,” Morris admits. “I don’t know what shape it was in when it got there, but we had to move it.”

“We do a lot of work in Atlantic Canada,” adds Kevin Philpott of Universal Transport, referring to why his company wanted to give something back to the community. About six years ago it began to ship food from Ontario to New Brunswick.

“We do it because we think it’s the right thing to do … it’s good to give back to the province that supports us.” n

TORONTO, Ont. — Toronto’s hungry now have access to a wider array of food, thanks to a five-year donation from Train Trailers.

The 48-foot reefer with a liftgate, parked on Lakeshore Boulevard, now makes it possible for the Daily Bread Food Bank to both gather and store more donations of refrigerated goods

“We wanted to do something that would touch a lot of people,” says Train marketing and public relations manager Tara Davenport. “They were continually turning down donated food because they had no place to store it.”

And a growing number of donations were in the form of refrigerated products, says Daily Bread’s Mary Anne Neville, manager of corporate and public development. “That’s the changing face of the food industry.”

“It’s just a magnificent-looking thing. We’ve been using it regularly and it’s really great as a backup for the coolers.”

Daily Bread deals with about 130,000 clients per month, doling out as much as 12 to 15 million pounds of food per year.

In addition to donating the trailer (Reefer Sales and Service, Maxon Lift Corp., Wabash National, ABN Amro Leasing, and Online Design also participated in the project), Train maintains it and will provide a truck when it needs to be moved for pick-ups and deliveries.

“It’s a feel-good project,” Davenport says. “We’d like to set an example for the industry.” n

food bank use in Canada has more than doubled in a decade.

– Source: Hunger Count 1999: A Growing Hunger for Change, prepared for the Canadian Association of Food Banks