Fifteen years in the making, patience pays off in the end 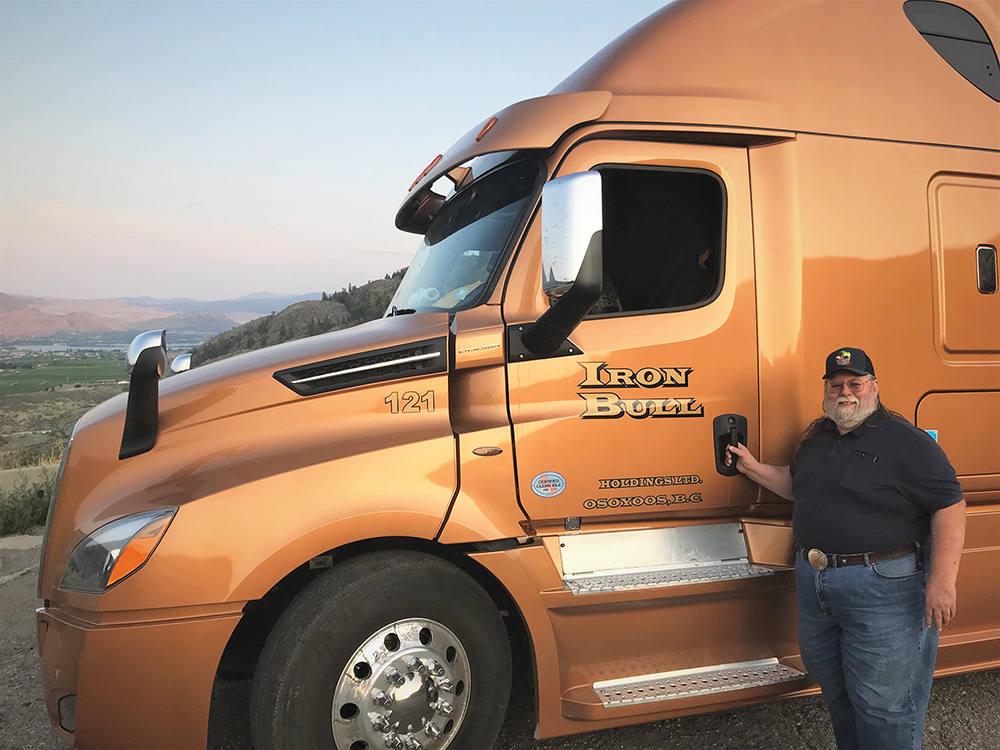 Bill Plaskett took his time getting Iron Bull off to the races, but now business is rolling.

OSOYOOS, B.C. — Better late than never, as they say, and a B.C. truck driver certainly took that to heart.

Bill Plaskett always knew he would one day be his own boss, and 15 years after purchasing a company, he finally got it up and running.

“I was a truck driver back in those days and had an idea that someday I’d like to be in my own business, though I didn’t think it was going to be trucking,” Plaskett said of the time leading up to the opening of Iron Bull Holdings.

“So, I conned (my father) into selling the company to me for a dollar.”

Growing up on an orchard in Osoyoos, B.C., Iron Bull was a family business launched by Plaskett’s grandfather. It was purchased by his father in 1934, who incorporated and named the business before selling it and retiring.

There was nothing to Iron Bull Holdings other than its name, which is derived from a nickname given to Plaskett’s grandfather by indigenous people he worked with on an English-owned ranch in Southern Alberta.

It wasn’t until 1998 that Iron Bull became a trucking company thanks to an aspiring, yet patient, entrepreneur.

Plaskett did not squander the 15 years leading up to his company’s opening. Working as a driver for several carriers, he has now been in the industry for 51 years. With an initial goal of being a mechanic, Plaskett suffered an injury after a car accident, sidelining his apprenticeship but leading to a career behind the wheel.

“I earned my education by working cheap, and I spent a number of years working out of Calgary hauling meat,” he said.

Plaskett moved just about everything, even making the switch to the construction industry in the hopes of spending more time with his wife and children.

But when the compensation did not meet his expectations, Plaskett returned to the road, ultimately working for Arrow Transportation in Tumbler Ridge, B.C., before returning to Osoyoos to be closer to family.

For the first two years, Plaskett was a lease operator, but said to Truck News-West that he “was growing disenchanted with leasing to somebody else, so I ended up pulling both my trucks off (the job).”

Plaskett admits his luck was better than his career management at the time he opened Iron Bull. The carrier he had been hauling for ceased its operations, and Plaskett was able to step right in and take over.

“Here I am with brand new hauling authority and I knew most of the customers and my main competition went out of business,” he said. “I mean, how much more can you ask for?”

The first three years were up and down for Iron Bull. But Plaskett continued to grow the business and add to its fleet.

“My wife and I made a deal that when we got up to five trucks that I would quite driving and come and work in the office,” Plaskett said. His wife is a bookkeeper by trade and was trying to run the company pretty much on her own until 2002 when Plaskett traded the driver’s seat for the desk.

I don’t care who you are, you cannot do justice to two jobs at the same time.”

Though he in no longer in the driver’s seat (of the truck, that is), Plaskett misses being behind the wheel, especially during the last couple of years.

“I look at what these trucks I’m buying today and what they offer the driver in creature comforts, and I look back to when I started,” he said. “Trucks have come a long way. These last Freightliners I bought are fancier than my pickup.”

One thing Plaskett would like to see return is driver seniority, the absence of which he said has a negative impact on the industry.

“When I started, all the senior guys did all the linehaul stuff and you used to start out working in town or doing short-haul, city tractor kind of stuff,” he said. “Today, the guys fresh out of school are running B-trains up and down the mountains and the senior guys are picking jobs where they can basically stay at home every night.

“You can’t train a driver in 120 hours. I don’t care who they are. You can teach them to drive around the block, but that doesn’t make a truck driver.”

Plaskett said if the federal government recognized truck driving as a skilled trade, our roads would be much safer.

“I defy you to get into one of these new trucks and deal with the rules, regulations, and technology and tell me that’s an unskilled trade,” he said. “I’ll argue that one with anybody.”

5 Comments » for Fifteen years in the making, patience pays off in the end