RIVERVALE, B.C. — Nestled along the Columbia River in B.C.’s West Kootenay region is a small family operation that you could say prides itself on being a big fish in a little pond.

Launched Jan. 6, 1946 by long-time truck driver Beverly Benson, the company has seen a lot of change over the years.

Today, Benson Oil is run by Albert Benson Jr., and the company is thriving thanks to his new approach to business. 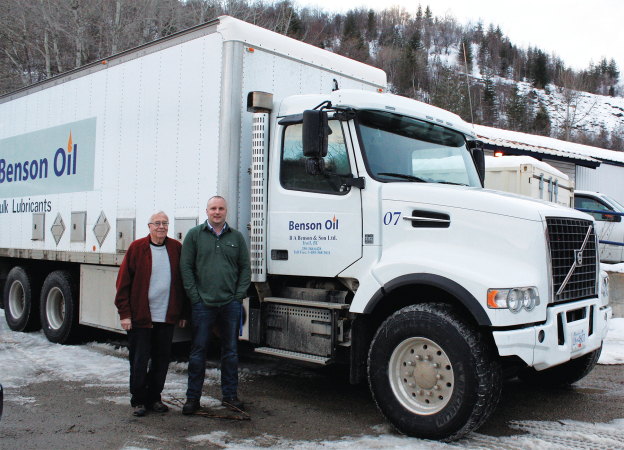 “I think inside the box, he thinks outside the box,” said Albert Sr. of his son. “He’s far more willing to boldly charge into something, where I might just think about it.”

One thing Albert Sr. has thought a lot about over the years is his family business, and talking about the company’s history brings an obvious pride to his face.

He was eight weeks old when his father Beverly took a chance on the business. Beverly had been hauling freight between Trail, B.C. and Nelson, B.C. for about nine years when the opportunity to purchase the company became available.

Shell Oil Company of California had bought out Union 76 around that time, wanting to get into the business in the Grand Forks, B.C. region.

Albert Sr.’s father became an agent for Shell of British Columbia and had a pair of small retail outlets in the area.

People were turning to furnace oil, the logging industry was doing well, and the population grew in the region, as did area industries.

“There was more of everything and those were pretty heady times, especially in the 50s after the war,” said Albert Sr.

The company approached its first challenge in 1968 when Albert Sr. was planning to return to university but ended up staying to help out with the family business after his father suffered a stroke.

An only child with feelings of responsibility washing over him, Albert Sr. took over the company, which continued to grow during the impending years.

“I was young, eager, and aggressive, and not afraid,” he said. “I probably should have been.”

Much like the situation that saw Albert Sr. enter the family business, Albert Jr. experienced something similar when his father had a heart attack in 2007.

Albert Jr. began to take over the day-to-day operations of Benson Oil around that time, just when things were starting to transition for the company.

“There were some changes in our relationship with Shell,” Albert Sr. said of the time his son stepped into the leadership role. “They sold out their marketing in Canada to Bluewave and this plant was one they didn’t want to keep.”

Contracted to haul for Shell until 2009, it was announced that Shell was going to tear down the plant. Selling lubricants at the time, Benson Oil stayed on the site, paying Shell rent, until Albert Jr.’s hunger to diversify the company settled in, and he and his father did just that.

Purchasing the site from Shell, BA Benson and Son Ltd. began operating as an independent supplier of fuel and lubricants and is now a supplier of diesel, heating oil, gasoline, aviation fuels, and multi-brand lubricants.

“He’s the one who has taken it to the next step,” Albert Sr. said of his son. “We’re truly independent. We can buy fuel or anything from anybody we want.”

Becoming independent and no longer being under Shell’s umbrella was both thrilling and eye-opening for the Bensons.

The company hauls its own fuel with two trucks going back and forth from Kamloops, B.C. As Albert Jr. has expanded the company, they have also had to contract outside carriers to handle demand.

Benson Oil has three tankers, two pups, and two body-job lube trucks in its fleet, having added to it in 2012 and just this year.

Though he has seen the fruits of his labor bring the company success over the past few years, Albert Jr. did not always see himself in his father’s shoes, but somehow he knew they’d fit.

“I think every kid in a small town, as they’re growing up, envision getting out,” said Albert Jr. “But the more I was away the more I envisioned coming back. I was never really pushed into it. I think for a long time, it was ‘keep the kid as far away from trucks possible.’”

Albert Jr. admits that he’s been the beneficiary of the work his father did over the years to grow the family business and develop quality, lasting relationships.

But Albert Sr. doesn’t let his son get away with not receiving any of the accolades for Benson Oil’s success.

“You have to remember, especially in the world today, that you can’t live on your reputation forever. You have to be able to come through.

“He’s the next generation of innovation,” Albert Sr. said of his son. “He’ll try things out. We have more gizmos around here that actually work.”
Albert Sr. said he calls his son every day to see how things are going with the business, and his wife, now 70 years old, still comes to work every day “because she wants to.”

And being a small fish really doesn’t bother this family.