Future crossings should be faster, easier

January 1, 2000
TORONTO, Ont. - New technologies and approaches to border crossings currently being considered by governments on both sides of the 49th promise to make transborder hauls a much less time-consuming and... 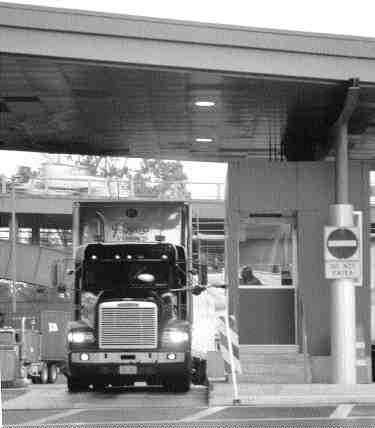 TORONTO, Ont. – New technologies and approaches to border crossings currently being considered by governments on both sides of the 49th promise to make transborder hauls a much less time-consuming and paper-intensive experience.

But the process will require significant changes to the way shippers, carriers and government currently do business.

Canada’s Customs and Revenue Agency is in the final stages of completing a five-year action plan to address its new approach for handling crossborder commercial traffic.

“We faced a number of key challenges and opportunities in the area of technology and it was time to take a step back and take a look at the big picture, do a lot of consulting and see where we want to go over the next five years,” Tim Hunt, a project manager with the agency told delegates attending the sixth World Congress on Intelligent Transport Systems, held in Toronto recently.

Hunt said the agency’s consultations with carriers, shippers, receivers and brokers led to a consensus on priorities. As a result there will be two key initiatives on the commercial side.

The first initiative, dubbed carrier reengineering, will put a heavy emphasis on receiving certain mandatory data prior to the truck’s arrival at the border so that the information can be assessed and a decision made on clearance ahead of time. Currently just 38 per cent of freight release forms are received and reviewed prior to the truck’s arrival. The information will also have to be sent in an electronic format. And freight is not the only thing Customs wants to preclear. It’s also considering a plan to have truck drivers pre-register with Customs and use something like a smart card to get through the border.

The second initiative, called Customs self-assessment, will radically change Customs’ way of identifying loads as low or high risk. Currently loads are assessed on a shipment by shipment basis. New thinking calls for a more macro-level approach. Rather than looking at individual shipments, Customs will look at the company in question as a whole.

The result will be that loads deemed low risk will get very quick turnaround at the border while Customs spends its efforts dealing with the high risk loads.

However, Customs will not go so far as to let shippers and carriers know ahead of time which shipments have been designated high risk and which ones low risk. That would prevent shippers from ganging low risk shipments and could result in an intermodal shipment involving several rail cars being tied up because one of the rail cars contains high-risk goods. But Hunt said there are just too many security risks involved in divulging such information to the shipper and carrier so early.

“If there were any drugs or contraband on a trailer and we told them that the trailer is high risk, you can bet it won’t stay on it,” he said adding that shippers and carriers will only be given that information at the point where it’s too late to take anything off the rail car or trailer.

On the other side of the border the emphasis is also on simplifying and speeding up the Customs clearance process. Currently more than 100 government agencies have some responsibility for imports and exports and there is a great deal of repetition in the forms required, which total 400 with more than 10,000 individual data elements. Richard Biter, deputy director of the office of intermodalism for the U.S. Department of Transportation, says the federal government is committed to significantly reducing the size and complexity of the work involved.

Starting this December, the government is also looking to deploy technology that will speed the passage of vehicles through Customs at three main crossings – the Ambassador Bridge in Ontario, Otay Mesa in California and Laredo, Texas. When a transponder-equipped truck approaches the Customs booth, the booth operator will be able to call up a customized computer screen that will immediately indicate if the carrier has the authority to operate in the U.S., if the driver is licensed to drive in the U.S., and if the truck has any outstanding safety problems by tapping into an international database of safety inspections.

Down the road the U.S. is even considering using biometric technology such as eye scans or hand scans to quickly verify that drivers are who they say they are.

Both the Canadian and American initiatives will likely require new technology beyond the current RF transponders carried in trucks and imbedded at Customs. Hunt said the RF transponders that were tested during 1997 and 1998 as a way to electronically identify and get vehicle information before the truck approached the Customs booth proved a “very elegant” solution but also a costly one.

RF transponders will probably continue to be used in the future to identify trucks at Customs but they will be joined by other more flexible and more cost-effective technologies such as the Internet and wireless communications, according to Donald Brady, vice-president of trade corridors/transborder systems for Transcore, a U.S.-based company that sets up such intelligent transportation systems at border crossings.

“These technologies will revolutionize the way we approach electronic border crossings,” Brady said. “When you’re talking about border crossings you’re looking at friction. You have regulatory concerns versus the concerns from the private sector to be as efficient as possible. The new technology will reduce this friction.”

For example, using a secured gateway over the Internet presents a much cheaper way to share the necessary information for clearance. n