WINNIPEG, Man. – It’s not something from the front cover of a Led Zeppelin album, but it’s just as innovative as the legendary hard rock band.

Look up and someday soon you could see a zeppelin-like airship floating across the Canadian skyline, transporting goods to remote northern communities.

Aerospace company Lockheed Martin, which manufactures airships, have been advocating for the use of airships, mainly to service Canada’s mining industry, but also as a means to transport freight into northern communities, which the company believes would help bring down the cost of food and increase supply in the segregated region. 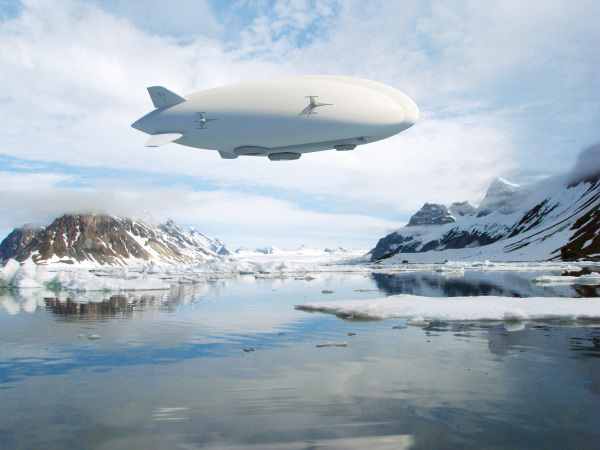 California-based hybrid aircraft operator Straightline Aviation has a contract for the first 12 airships from Lockheed Martin, and the company has indicated that Canada would be an ideal testing ground. Production of the airships is set to begin in 2018.

If the idea of moving cargo into northern Canadian communities comes to fruition, it would certainly alter the landscape of the trucking industry, which is the primary mode of transportation of goods in Canada’s north with the use of ice roads – made famous by the show Ice Road Truckers.

Alan Handley, CEO and chairman of Varialift Airships out of the U.K., which also manufactures airships made of aluminum, said the idea of utilizing such a mode of transportation would mean a ‘bright future’ for the trucking industry.

Handley said his company has been in talks with Canadians for the past five years during conferences in Calgary, Winnipeg, Yellowknife and Toronto.

Varialift’s ‘monocoque’ all aluminum airships will be manufactured and assembled in Chateaudun, France. They are designed for short and long range trips and can carry loads from 50 to 1,000 metric tons. Handley said the total operating cost is 17 cents USD per ton kilometer for the 50 ton capacity model, the ARH50, and it can land on any flat surface in temperatures down to minus 60 degrees Celsius.

Truck West contacted Lockheed Martin several times seeking information on the company’s airships, but did not receive a reply.

Dr. Barry Prentice is a professor at the University of Manitoba’s I.H. Asper School of Business’s department of supply chain management, and he has long had an interest in airships and even became part of this master’s thesis while in school in Guelph, Ont.

In the 1980s when funding for airships diminished, Prentice went on to work more on other forms of transport, with a particular emphasis on rail, air and truck.

“Around the year 2000, news was emerging that climate change was happening and we could see it in the reducing length of the ice road seasons in the north,” Prentice said. “It occurred to me that cargo airships would provide an ideal solution.”

Prentice attended a conference on airships but was disappointed that there was no focus on the a business case for implementing such a mode of transportation to Canada’s north, so he organized his own business conference – Airships to the Arctic – bringing together potential user and providers of airships to discuss whether the idea was a viable solution to Northern Canada’s supply chain woes.

Prentice notes that despite the fact that there are currently around 12 airship developments currently taking place, there are no commercial cargo airships that exist, but there could be in the next three to four years.

“The problem in every case is the lack of funding,” Prentice said. “The two airships that are closest to development are the AirLander in the U.K and the SkyTug by Lockheed Martin in the US.

“It is worth noting that unlike the 1980s, the collapse of oil prices has not dampened interest in cargo airships. The difference in 2016 is the concern about climate change. International agreements to curb carbon emissions have been signed and carbon taxes (and) cap and trade programs have been created.”

Prentice said airships burn far less fuel because they use no energy to lift, and can use alternative fuels like methane and hydrogen without compromising cargo space due to their large size.

“Lighter-than-air airships have much higher fuel efficiency than heavier-than-air aircraft,” said International Air Transport Association spokesman Jean Baptiste Meusnier, as noted in ‘Sustainable Transportation’ report provided by Prentice. “This makes them ideal for the use of cargo, as seen with some of the super heavy lifters already in operation.

“An airship produces 80% to 90% fewer emissions than conventional aircraft. They also fly at the lower altitude of 4,000 feet instead of 35,000 feet, which means their water vapor trails contribute almost nothing to global warming.”

Prentice also agrees with Handley that airships would be complementary to transport trucks.

“As the current case, all freight will begin or end on a truck because it is hard to envision door-to-door airship delivery,” said Prentice.

Prentice said airships would never compete head-to-head with trucks where roads already exist, as the cost to move freight would significantly higher for an airship. He estimated that an airship moving 20 tons could cost around $25 million versus a tractor-trailer being around $250,000 or less.

But in areas where there are no roads, and the price tag to build such infrastructure for truck use being approximately $3 million per kilometer, Prentice said airships would be beneficial to both the communities served and the trucking industry.

“Year-round access is denied to remote communities and mining operations,” he said. “If we had airships to serve the north, a lot more freight in general would be required. All this additional freight would be on a truck and transshipped to an airship. Hence, more business for trucking, once airships become available.

“It does not make economic sense to move goods in airships where highways and trucks are available.”

The notion of international trade, moving freight across oceans and over the polar shipping routes is another dynamic Prentice addressed.

Goods being traded between China and Europe would transported over Arctic routes to a distribution center like Winnipeg, Prentice said. The cargo would then be shipped on trucks for delivery to metro regions like Chicago or Dallas, and the airship would then be reloaded in Winnipeg and head back to China.

“This would be much faster than ocean container movements, and much less expensive and polluting than airplane movements,” Prentice said. “It could also create a huge increase in trucking activity that is complementary to the airship.”

The idea of airships is no longer some ‘wild-eyed idea,’ Prentice believes. He pointed out that there have been a number of ‘old’ technologies which have become new again – electric cars, wind turbines and hydrogen fuel cells – not because they did not work when originally released, but because at the time, they were not economically viable given the
alternatives.

And Prentice said airships are much the same.

“Airships crossed oceans on a scheduled service 80 years ago and set endurance records that still stand,” he said. “They were discontinued because jet engines came along and became the dominant technology of the ‘jet age’, which not only dominated the skies, but eliminated ocean liners and passenger trains.”

But with many today focusing heavily on fuel and greenhouse gas emission reductions and sustainable transportation practices, airships have reemerged as a practical environmentally-conscious option – one that both Handley and Prentice believe would bolster the trucking industry.

“One day, people will look back on this era and ask, ‘Why did it take so long’,” said Prentice.

“I predict that when the cargo airship matures – in about 40 or 50 years of growth – it will be as large and important as the airplane industry is today.”