ST. ALBERT, Alta. – Growth and innovation helped transform what was once a conventional trucking company into the diversified company it is today.

Gerald Verstraete got the wheels rolling on Gervee Trucking Ltd. in 1984 hauling feed and meal to the cattle industry before Collin Briault entered the picture 18 years later, and Gervee Group of Companies Inc. was born. 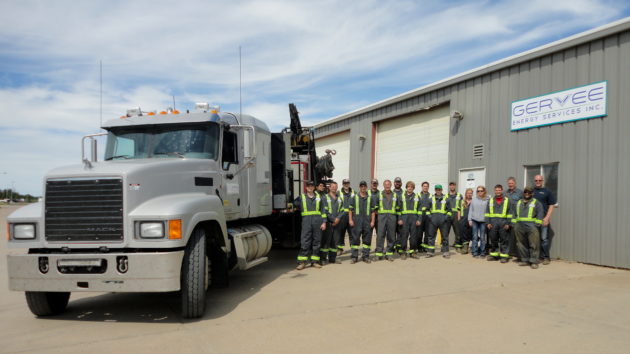 Wanting to tap into Alberta’s oilfield service industry, Verstraete approached Briault in 2002, and the duo partnered up and built the first rod transfer unit (RTU) in North America.

“With this unit, we were able to haul and handle continuous rod very safely and efficiently to and from the lease,” said Briault, CEO of Gervee. “This also allowed oil companies to reuse the continuous rod string assets in other wells for production.”

Briault said the innovative effort helped bring some momentum to the company, allowing Gervee to expand its fleet 10-fold in the last decade and continue to work within the Western Canadian Sedimentary Basin (WCSB), with the Lloydminster, Alta. area being their primary focus.

The WCSB is an area spanning 540,000 square miles (1.4 million square kilometers) and includes parts of B.C., Alberta, Saskatchewan, Manitoba and the Northwest Territories, and contains one of the world’s largest reserves of petroleum, natural gas and coal, which the oil sands are part of.

Today, Gervee is one of Western Canada’s largest continuing rod hauling fleets, and operates both out of Lloydminster and Edmonton, moving reels continuous rod transport reels from the central fabrication facility in the province’s capitol to local rod plants in Alberta and Saskatchewan.

But as with any economic downtown, challenges arise.

With Alberta’s oil and gas sector suffering from one of the biggest hemorrhages in recent memory, Gervee has been forced to trim some of the fat from its business.

“Our team dug down deep into the bowels and started from scratch and restructured the entire company,” Briault said. “It wasn’t an easy task, but in the end we are a much more efficiently run company with a very strong foundation and fundamentals moving forward.”

Part of moving forward has been Gervee’s expansion into trailer maintenance, specifically being able to secure a four-year contract for the repair and maintenance of what Briault called a ‘very significant fleet of trailers.’

“This has helped us a lot during this downturn and has stabilized our business so we were not so susceptible to the cyclicality of the oilfield,” Briault said. “When you’re not moving forward, things get stagnant, and before you know it things are stuck or moving backwards and opportunities get missed because you’re not on the ball. Sometimes doors only open once and you have to take advantage of every opportunity that’s shown to you.”

For Gervee, drivers are also an important part of the equation when measuring success, and like so many in the industry, Briault believes the occupation should be recognized as a skilled profession with higher pay and a better quality of life for those who chose to get behind the wheel.

“In a lot of cases, drivers are not getting compensated for the hours they are putting in,” said Briault, “and they spend most of their time away from home and loved ones.

Helping this vocation become recognized as a profession would help attract new people into the space and driver retention would be a lot higher because they would have something solid to work towards for their future.”

Briault feels that a standardized training program and a homogenous salary would be seen throughout the country if the driving profession were to be established as a skilled profession by the federal government, which would result in a safer industry that is based on a more solid foundation of education, awareness and quality of life for the driver.

“From a company standpoint,” he added, “better training, awareness and employee quality of life equals a happier, healthier and more productive employee who is less prone to injuries and (Workers’ Compensation Board) WCB claims, which costs companies millions every year.”

In addition to what Gervee has done from the business side, the company and its employees have been involved in the municipality of Lloydminster and Alberta as a whole from a community perspective as well.

Whether it’s providing sponsorship for local rodeos, golf tournaments or buying a half-ton truckload of food for the victims of the Fort McMurray wildfires, Gervee employees know that it’s important to give back to the community.

“We feel that it’s important to support those in times of need,” Briault said. “It’s an automatic thing, when people need help, you help, that’s just how it is, no questions asked. Plus, it feels really good to know that we are putting ourselves out there and not expecting anything in return.”

Part of Gervee’s philosophy is to take a slow and steady approach when it comes to growth, and with an eye on the future, the company is working toward continuing its pioneering ways with the development of new innovations that focus on personal and environmental safety within the crude oil loading and transportation sector.

“Along with our hauling and trailer maintenance divisions, we see these innovations as part of the future for Gervee to grow and expand and solidify our foundation for the future,” Briault said.

And for a small-town Albertan, establishing a vision for the future has always been important. Briault started as an equipment operator, but said he soon knew he wanted to be an entrepreneur, and with the help of his family, and now his father-in-law, who he credits as his mentor and best friend, he was able to establish himself as a businessman and successful CEO of Gervee.

“Without these people in my life, I wouldn’t be where I am today,” said Briault, “and I am very thankful that they have a lot of patience to help me grow and learn.”

Briault oversees all facets of the business, but acknowledges that the team around him is what makes Gervee a success.

“As a leader, you need to surround yourself with the best people to succeed,” said Briault. “I believe I have done that, and it is an honor to move forward and grow with this great team.”