LETHBRIDGE, Alta. – Every truck has a story, but for some, there is more to their history than others.

A 1967 Peterbilt 351 was on display in Lethbridge, Alta. for the second annual Southern Alberta Truck Expo June 17-18, and over the years, this rig has developed a story.
Charles Nickol purchased the truck from California dairy farmer Art Van Beek. Van Beek, along with his family, is a well-known figure in The Golden State, owning El Monte Dairy in Tipton, Calif. The Van Beek family (Art, Doug, Bill, Rick and Raymond) was presented with the 52nd Farmer of the Year award in 2012 by the Kiwanis Club of Tulare. Nickol said the ’67 Peterbilt was originally a logging truck, with only 299 of its kind manufactured, and it was the only one to his knowledge left. He said Van Beek purchased the truck from another Californian, presumably from the individual who put the ‘Lopez’ name on the doors, which remain to this day, but Nickol said Van Beek never used the vehicle on his dairy farm. 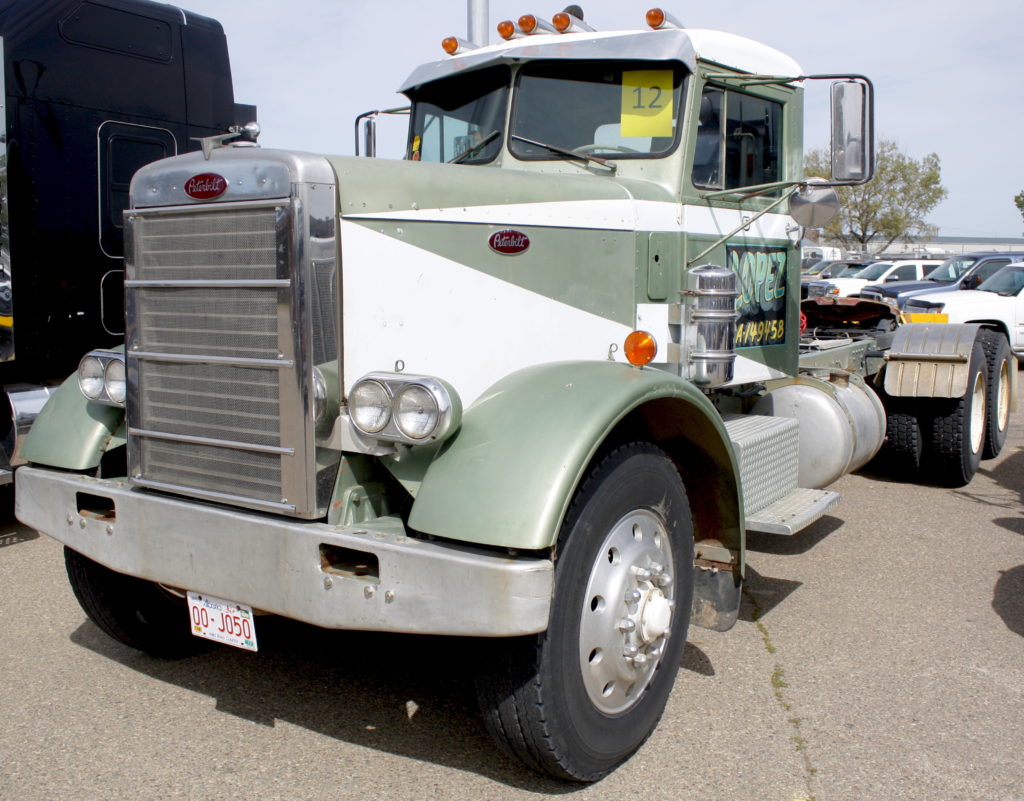 With a 355 horsepower Cummins engine measuring 855 cubic inches, Nickol said the truck is now mostly used as a farm truck to haul grain.

Nickol said the particular 351 model of Peterbilt was often referred to as a ‘needle nose,’ – a term he uttered reluctantly – as the size of the radiator was much narrower that most other models, giving it a ‘needle-like’ appearance.

Due to increased horsepower in today’s trucks, most newer models must have larger radiators to allow for better airflow to cool the engine.

The truck also features what Nickol called center-point steering, which he said was rare. The concept behind center-point steering is based on ‘Ackerman Angles,’ where there is a relationship between the front inside tire and front outside tire, with the inside turning tighter, as it makes up a much shorter distance on a corner or curve.
Nickol said one of the issues with center-point steering is that unlike power steering, the wheels do not automatically return to a straight position, but rather remain turning even when the driver takes their hands off the steering wheel, which can pose a challenge to some.

The truck also tests mechanics with a hood featuring a butterfly design, which Nickol said makes it difficult to get under to work on the engine. Despite its age, the truck does the job it’s intended to do, but it still takes some getting used to.

Saying he has never been a guy to trade things in, Nickol loves the vehicle’s originality and said he would never customize the truck.

In an odd twist to the story behind the ’67 Peterbilt, after purchasing the truck from Van Beek, Nickol discovered that he lived right next to the California dairy farmer’s cousin, just outside Lethbridge.

It is a small world indeed.