EDMONTON, Alta. – About a year-and-a-half in as executive director of the Alberta Motor Transport Association (AMTA), Lorraine Card is now the president of the association and becoming more and more comfortable in her role.

Following the AMTA’s annual Leadership Conference, which was held in Banff April 29-30, Card sat down with Truck West to tell us how the past year has gone and what she hopes to accomplish in the future. 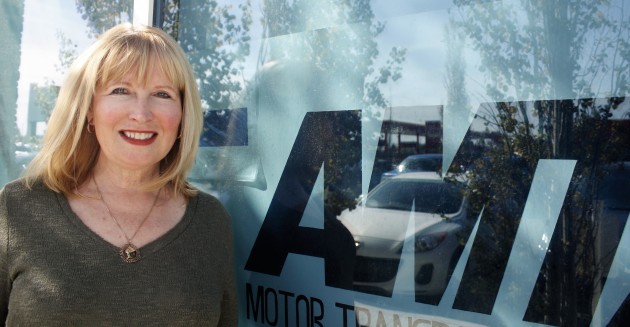 TW: Start off by telling us what you were doing prior to coming on board with the AMTA, and how you came to accept the executive director position.

Card: I came here with 20 years of bus industry experience behind me, and I worked for most of my career with Greyhound, but I also worked for Diversified Transportation.

With Greyhound, I finished my career as director of safety and driver development, and then with Diversified, I was their manager of driver training and set up the driver training school here in Edmonton. I had an opportunity to move to government. There was a position available and I did get the position; I worked in Edmonton as the director of driver programs and licensing standards, and I was there for two years.

I was one of those people who refused to move to Edmonton, so I still lived in Calgary, so it was a bit of a challenge commute-wise. I found that I was continuously on the road. Then there was a further opportunity within government to apply for a position in Red Deer, and that was director of carrier services. I got that and that made me closer to Calgary, but I was still refusing to make the actual move, because my family was all in Calgary. I was trying to do a daily commute, and the last winter I did it, it was a very bad winter, and thought that it was like a Russian roulette game out there on Hwy. 2 sometimes, so I thought of leaving (my job). Word got

out and I got a call from the AMTA and they said they’d like to talk to me with my experience with industry and with government, and I thought that was terrific…and I got the executive director position.

I was very pleased and extremely proud that Carl Rosenau (AMTA board chairman at the time) would call me himself. Being in carrier services, you have a lot of interaction with a lot of different carriers, so I’ve had the opportunity to meet some of the high-profile players within Alberta. I was also working a lot with Richard Warnock who was president of the AMTA at that time, and we had a couple of initiatives we were working on jointly to try to improve relations between the AMTA and government…and it was him who mentioned me to Carl.

TW: Has your government experience helped you find success in your AMTA role?

Card: It has. I’ve been very fortunate that even when I was in industry, I had some really positive connections with government – the Red Deer office with carrier services – so I have a lot of interaction with the folk at government and transportation. I thought it was fairly seamless, there was still learning, obviously; government is way different than industry, but I felt that they knew me, they knew who they were getting and I knew who I’d be working with. I really did enjoy my time with government.

TW: You were on the job for about six months when the last Alberta election happened and a new government came into power. How has that transition been?

Card: I think there’s been a learning curve on both sides, and I think with the NDP, they came into power and they were still looking for people to fill some of the different seats.

We’re fortunate with (Transportation) Minister Brian Mason. He has a commercial licence, he has done some commercial driving and he understands the concept of that. But I think we allow them a learning period. We sent in our briefing notes with our policy position papers and said these are key to transportation, and when you have some time, we’d like to sit and talk to you personally about them.

TW: What has been your biggest hurdle you’ve had to overcome since you started with the AMTA?

Card: It goes back to, even though we have a good relationship with government, there have been a lot of issues on the books for a period of time, and it’s been being able to get some forward motion with that.

We’ve spent the last year-and-a-half meeting with government, talking with them and brining some of those issues forward from an education perspective without seeing any movement on them. Even though we really pride ourselves at the AMTA with a really strong relationship with government, it was just like, ‘What are we accomplishing?’ We do meet quarterly with ADM Shaun Hammond, and that’s been very effective. He’s very engaged with the AMTA…he knows the issues and all the players.

TW: Given the economic climate in Alberta right now, how has the trucking industry changed in the province during the last year?

Card: Certainly the heavy-haulers are feeling the impact on oil and gas, and travel up to Fort McMurray has declined. Now, a lot of those drivers all have Class 1 licences, so they are creeping back into the transportation side of the business, so there has been some reprieve with the driver shortage.

But still, the companies that are hiring still have minimum driving standards and are making sure that someone is qualified to operate their vehicle. Just because someone shows up with a Class 1 licence doesn’t mean that they’re going to go to work, but there has been a reprieve. Some of the other trucking companies that are not in oil and gas are doing quite well, so it really depends what you’re hauling. And we think that when things do start to turn around everything will improve. Competition is still as strong as it always was. Everybody is competing for work so margins are that much tighter.

We have heard that of the number of moving vans that are leaving the province, nine are leaving compared to one coming in, and most of them are going back to Ontario.

TW: Why do you think there seems to be a disconnect between what the associations are advocating for and what some drivers believe when it comes to the mandatory use of electronic logging devices (ELDs)?

Card: We think it’s because it’s new technology, and with new technology there is a bit of a fear factor with that. Any carriers we know that are using ELDs and maybe had a resistance to them initially, are finding that they are extremely beneficial, as long as the driver understands how they work. It saves them from doing paper logs and probably more fuel efficiency.

Once the driver understands that it will save them some time, we’re able to explain this to them. But there is a cost, too, so if you’re an owner/operator or you own a small company with a small number of vehicles and you have buy this technology, there is going to be a cost, but we think savings will be generated with savings for the driver with time and logging.

We worked in conjunction with the Canadian Trucking Alliance (CTA) and they came cross-country and did ELD presentations. We did two in Alberta, one in Calgary one in Edmonton, and we had a tremendous number of carriers to both sessions. They are coming out again to talk about ELDs and food safety, because there is a lot of apprehension. (ELDs) are coming and I think we all have to get used to it, and we should start making the change sooner rather than later.

TW: CTA president and CEO David Bradley praised the job you have done thus far during the AMTA’s Leadership Conference. How did that make you feel, and what do you need to do in the coming year to get that same praise at your next conference?

Card: Yes, that’s the tough one. I’ve known of David Bradley for my whole career in transportation because he’s in all the industry-related newspapers and magazines, so I’ve always followed him and read his articles, and I really like his style.

To meet him and to work with him this past year was like, ‘Oh my gosh, that’s David Bradley!’ I joke with him about that. He’s just like anybody else; he’s there, he helps you, whatever he knows he will share with you, there are no secrets with David Bradley.

I was a little bit embarrassed, but I was overwhelmed with the fact that he had so many nice things to say. CTA and its staff do a tremendous amount of work, and if we have an issue in Alberta we can phone any of them and they’re happy to help us. Getting that kind of praise from David Bradley, starting in a new role and working with someone like Richard Warnock…and as David said, ‘She came to the meetings, she was fairly quiet and doing a lot of listening,’ and that was all very true. I was very proud when I told David that it looks like Alberta is going to get a pilot on the new generation wide-base single tires, and he said, ‘That’s terrific!’ because we’ve all been working on it for so long. So to be able to get those kinds of accolades once again I’d say we have to just keep doing what we are doing. If we can move forward and actually get the pilot done, and there is some movement on the commercial mandatory driver training…we’re hoping that (Ontario’s plan) will be rolled out to all the jurisdictions. So hopefully we’re going to have two wins in a very short period of time.

Last year, we had Bradley at our conference and we surveyed to find out which speaker people liked the best and David was the number one speaker.

Card: Just to say that the AMTA as a whole was very pleased with Minster Mason’s announcement to move forward with a pilot for the new generation wide-base single tires.

We’re hoping that that’s going to happen soon, and then we could potentially move outside of a pilot for the tires for Alberta.

People are engaged to move it forward and that’s really encouraging and exciting.

It was really big news for us…it’s been on the books for around 10 years and we’ve been pushing it…this might be the start.