SALMON ARM, B.C. — Whether you’re on the left or right is a common distinction in the political arena, but what about which lane trucks should be relegated when passing through town?

Shuswap resident J. Edgar Murdoch penned a letter to the B.C.’s Ministry of Transportation requesting the government consider erecting signage along the Trans-Canada Highway through the City of Salmon Arm directing commercial trucks into the far left lane when passing through town. 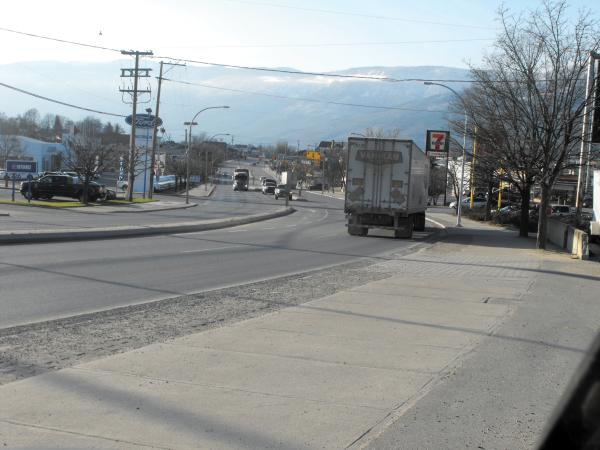 Murdoch points to Nevada capitol Carson City as a successful example of an urban community that takes this approach, saying all through trucks are relegated into the far left lane of Hwy 395 when entering the city limits from either direction.

“Traffic moves smoothly, there are few interactions between vehicles, frustration is reduced to near zero and life is good,” Murdoch writes in his letter to the ministry.

“It makes consummate sense then to encourage, not just large trucks, but all through traffic to stay in the left lane until the city limits have been attained,” suggests Murdoch. “The advantages are many and include fewer crashes and incidents, therefore a savings on the use of first responders, enforcement officials, routine interruptions, and of course insurance claims. Also, there will be a notable increase in smoother traffic flow, reduced wear and tear on vehicle components, such as brakes and tires, less road rage events, and reduced stress on all road users.”

Murdoch’s driving experience includes 67 years in transportation, 50 of them on the road and 10 as a safety officer. He says because the Trans-Canada is the main street of many communities across Canada, there are several common and unique obstacles to the safe and smooth movement of traffic, which includes everything from passenger vehicles, cyclists, pedestrians, and large semis.

Murdoch’s idea, however, is not on the City of Salmon Arm’s radar.

Robert Niewenhuizen, director of engineering and public works for the city, said the idea of directing commercial traffic is not one that has been brought to their attention. On the contrary, he said a more common practice is the have commercial traffic stay in the far right-hand lane.

“For the most part, I would say from my experience that the majority of the commercial traffic does keep to the right lane and are very courteous while navigating through the city,” Niewenhuizen said. “I am not sure if there would be a benefit in having the commercial traffic keep to the far left lane as most of the intersections along the Trans-Canada corridor are signalized and provide opportunities for drivers to enter and exit the highway.”

Niewenhuizen contended that typically the practice is that slower traffic keep right and the far left lane is for passing, and a change could be confusing for drivers.