For Logikor, being a safety-first fleet isn’t just a logical approach, it’s the reason for its existence and success.

Logikor came to be in 2005 and started as a transportation solution business. While it outsources the majority of its transportation opportunities (working with customers and carriers to match needs and strengths), it has its own small fleet that has caught the attention of Trucking HR Canada and customers alike who would credit the fleet as being one that is worth a second glance on the roads. 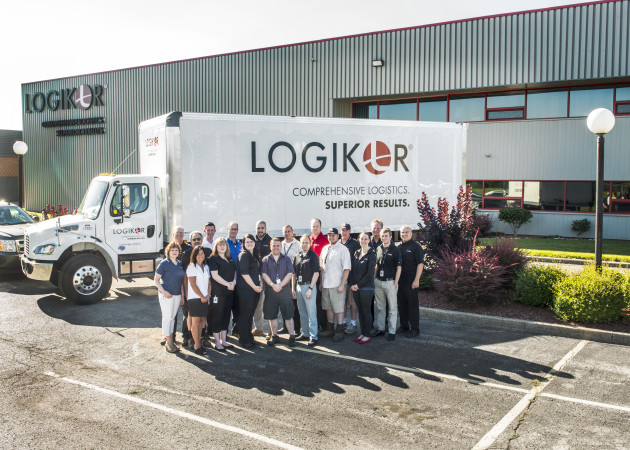 Currently Logikor’s modest fleet of 10 trucks hauls automotive parts and components for the national defense industry both domestically and cross-border.

Today, it employs 15 drivers and has 27 trailers.

“Everything we do is scheduled and dedicated,” said Logikor’s quality and compliance manager, Rick Morgan. “And it’s all no-touch freight.”

So how has such a small fleet turned the heads of some very influential members of the trucking community?

According to Morgan, it’s thanks in part to its unique management style and safety-first approach.

“I’ve been in the business for 30-some years,” he said. “I’ve worked for many trucking companies. And (here at Logikor) we’ve really turned the entire HR management process away from a more traditional style of management in that…in a lot of other companies where I’ve worked, some of the transgressions we’ve worked with here would have resulted in a team member being let go. We don’t do that. You really have to step a long way outside of the boundaries to be let go here. And for the most part that would be you showing that you are unwilling to work with us to correct the behaviour or activity that we’ve identified.”

Morgan says that if a driver is having a problem, instead of canning them on the spot, the company takes pride in re-educating and retraining them, to show them they are still valued as an integral part of the Logikor team. This logic has also helped the compnay maintain such a low turnover rate.

“The approach that we put in place here when it comes to drivers is really much more one of educating or training or working with them and developing them as a team member and understanding what their challenges are and working through it and supporting them when they’re facing those issues,” he said. “It shows them that we value them as a team member.”

Morgan went on to explain that this approach is especially true when they hire drivers who have worked for carriers that think it’s okay to bend the rules when it comes to hours-of-service. He said that there is a misconception in the industry that delivering a load when it’s convenient for the company – even if it means going over the allowed hours – is fine. But if the driver decides to push through and deliver the load when it’s convenient for the driver (maybe the delivery is close to home), they are punished.

“From the perspective of what that tells the driver, it’s the same with anyone, you can’t tell me to break the rules when it’s convenient for you and punish me when it’s convenient for me. We don’t do that here,” said Morgan. “I’ve had a couple of (drivers) who I’ve had to bring in and talk to because when they first join us, they’re used to making that judgment call whether they should operate a truck with a given condition, as the misunderstanding is, that delivering the freight is more important than complying with the rules. And our position is safety comes before any other consideration.”

Morgan said this mentality of Logikor has set in with the drivers and has helped with retention because drivers know they can do things by the book, they’re not expected to break any rules and they know when they go over the scales, they have nothing to fear.

“Safety is right in our vision and mission, safety goes before anything else at Logikor,” Morgan said.

The company has an intense training program and interview process before a new hire is put on the road. New Logikor drivers won’t be in the truck alone until they complete four days of required training. All new drivers have to complete and pass a road test with a third-party instructor.

New drivers then spend another day with Morgan going over the expectations when it comes to paperwork and customer service.

Then, the driver has to go out with a Logikor driver and shadow him/her for the day. Most times, they go to the customer they’ll be visiting every day as part of their dedicated route, and meet the customer in person.

“When you’re on a dedicated route, like our drivers are, you’re going to the same shipper over and over, you are the company,” Morgan said. “So customer service is very important in what we do.”

Logikor has also invested in an annual driver meeting and annual ride-alongs with a third-party instructor who provides safety tips and feedback on performance.

All these safety measures have definitely paid off for the fleet, said Morgan.

“We’ve actually gone…and I’m touching wood as I say this…we’re now entering our third year with not one single highway vehicle collision,” he said. “And that’s including the last two winters driving from Toronto to London.”

Logikor’s biggest strength, according to Morgan, is its approach to its customers. It doesn’t just view the relationships as business transaction, Morgan explained, rather it views them as partners.

“We really strive to establish partnerships where we are an extension of what it is that they (customers) do,” he said. “And those are the most successful relationships that we have. Our customers tell us how much they appreciate things all the time.”

A recent example of how Logikor has the whole shipper-carrier relationship down pat is how it dealt with the recent Nipigon River Bridge disaster.

“The bridge is very important to us because certain defense products…aren’t allowed to cross international lines unless there’s licences,” he said. “So when we heard about that Nipigon bridge on the weekend, we told our customers right away. So at 5 a.m. our first defense customer had a notification from us saying, ‘Hey just so you know we’ve got a situation, we don’t know what’s going on there.’ By 10 a.m., conversations had been going on between us and the customer, and we knew the status of every shipment that was en-route to them…the customer had reached out to the appropriate bodies and 24 hours later, we were ready to roll in case that bridge was shut down. We tend not to wait for our customers to come to us, we’re very proactive in identifying what’s going to impact them. We try to address and find solutions to problems that are going to affect them, too.”

As far as the future goes, Morgan said the business is always looking for growth opportunities and that he believes “we can bring our customers enormous value in the supply chain.”