SURREY, B.C.  — You would have a strong argument if you said continuous growth and profitability are the primary goals of any company in the business world, and by those measures, Len’s Transportation Group is a B.C. trucking industry success story. 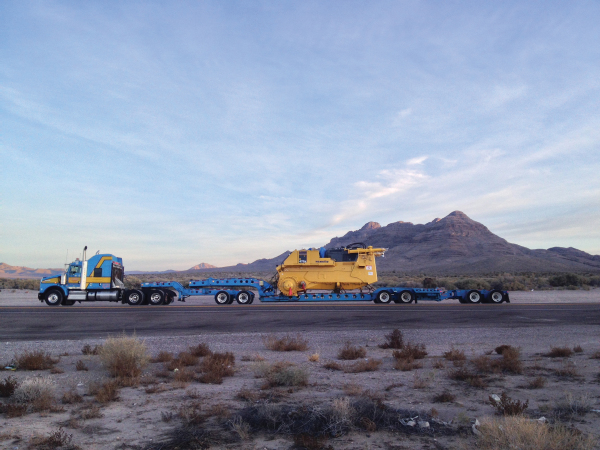 The company, which was called Len’s Lift Truck Delivery, launched to fill a need delivering lift trucks, something Leonard Kane Jr., who has taken over running the company for his father, said was not even on his dad’s radar.

“He basically took a suggestion from a shipper in the industry to personally fabricate from scratch a tow-behind trailer that would allow for a forklift to be driven onto the trailer and up to the deck of the truck mechanically,” said Kane Jr. “Basically, my father created something that was efficient to load and unload equipment with superior efficiency to move the forklifts around the Vancouver area. Word got out and his business started to boom.”

Kane Jr. has been around the business since he was in diapers, literally, but didn’t officially come on board until 1995. He became operationally involved after getting his post-secondary education and then took over the position of director in 2008, which proved to be a challenging time.

“Just in time for the Great Recession, where I think I really learned the most about my business,” Kane Jr. said. “When you have to lay off half the people in a small business who you worked with for years, it’s something that I will never forget.”

But in 2012, the company really started to pull away from the downturn, and demand was strong.

“It wasn’t uncommon to tell customers it would be four to six weeks before we could tackle their orders,” Kane Jr. said. “The demand for new equipment to be hauled from Washington and B.C. to Alberta was constant.”

Constant, at least, until the price of oil and gas crashed in 2015.

“We saw a dramatic decrease in the volume of freight heading to Alberta in 2015, in some cases non-existent for the prices offered. Alberta was in shock, which affected us,” Kane Jr. explained. “In 2016, volumes to Alberta never returned. Price for freight was extremely low and you had to always be very sharp with the pencil and almost always work a backhaul. Customers cared more about price than service.”

Kane Jr. said revenue for Len’s Transportation was down 20% year-over-year from 2014 to 2016, and he was forced to reduce not only the number of trucks he was running, but also his staff. But 2017 appears brighter for Len’s, as Kane Jr. said economic signs are looking up.

Over the past couple of years, Len’s has become a Certificate of Recognition (COR)-certified company, and has even started to embrace the scary world of social media. But nothing has helped bring the company back to its high level of success more than its staff.

“From the heart, my team of office staff, mechanics and excellent drivers are what really makes this company successful,” said Kane Jr. “Honestly, the best chance you will have working for me is if one of my team members refers you to my organization. I only hire people who are hardworking, highly skilled and want to work in a team environment.”

Seeing his father’s original month-to-month revenue journal must had inspired Kane Jr. to stick to a winning formula, because the services Len’s Transportation provides have not changed since the company was birthed 53 years ago.

Len’s boast five trucks that focus on moving equipment within the Greater Vancouver Regional District, usually with payloads not exceeding 50,000 lbs. Ranger, which is made up of 15 trucks, transports equipment locally, provincially, nationally and internationally, including all of the lower 48 US states, with payloads between 40,000 lbs. and 150,000 lbs.

Other than his multiple charitable efforts and continuous search for quality employees, Kane Jr. said his hopes for the future are simple – to remain profitable, just like his father did back in the Swinging ‘60s.

“I would prefer to remain small with a great group of people I consider family,” he said. “We have always grown when we need to. If we can stick to our core values of professional transport, excellent service, fair pricing, and a dedication to safety, I would be more than satisfied.”