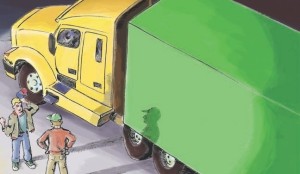 The story so far…

Mark has a coffee with two other drivers who work for Bud. One of the drivers, a constant complainer named Manny Giron, wants to know why Bud gives Mark all the best loads while he’s getting only local runs. Mark can’t speak for Bud, and takes offense to Manny’s assertion that Mark is paying Bud kickbacks. Just as the conversation starts to get heated, Bud enters the coffee shop.

Bud admits that Mark gets better loads than Manny and he explains why. Mark takes whatever Bud gives him without complaint. Mark’s reliable while the same can’t be said for Manny. But Manny’s not listening, he wants what Mark has, even though Mark’s been working for Bud for years and Manny’s still on his first. Mark decides to teach Manny a lesson by switching loads with Manny. Manny will go to Tampa, while Mark gets the load to Buffalo…

“Are you sure you want Manny to take that load into Tampa?” Bud asked outside the coffee shop after everyone had gone their separate ways.

Mark put a hand on Bud’s shoulder. “Relax, Tampa’s not that far away, really. He’ll be there in no time.”

“It’s not the distance I’m worried about, it’s the getting there.”

“You want him to learn, don’t ya? He needs to gain some experience, you told me that yourself.”

The two men started walking, Bud toward his car and Mark toward Mother Load.

“But I’m warning you,” Bud said. “If there’s a penalty for whatever reason…you’re paying it.”

Mark thought about it and agreed. “Sure, it’ll be worth it.”

Mark took his time getting underway. Manny had been eager to get to Tampa and had left an hour earlier. Even so, Mark had a feeling he’d be catching up with Manny at the Queenston-Lewiston Bridge. It was just after seven in the evening when Mark reached the bridge. He took his time pulling up to the crossing, searching for Manny’s rig on the other side of the border. Although it was dark out, Mark had no trouble finding Manny’s bright yellow Volvo parked in the US Customs and Border Protection’s secondary inspection lot.

“What a surprise,” Mark said under his breath. He pulled up to the booth and presented his invoice and his bill of lading. He was hauling Manny’s original load – a trailer load of Canadian beer to a distributor in the US. He’d made this run several times before and the distributor had been in business forever and had worked out all the Customs issues years ago.

“Go ahead,” the CBP officer said, waving Mark into the United States.

But instead of heading for the distributor’s warehouse in Buffalo, Mark pulled up alongside Manny’s truck and parked Mother Load.

Mark climbed down from Mother Load and did his best to look concerned. “What’s wrong, buddy?”

“Everything,” Manny said, the frustration evident in his voice.

“But it is! You gave me a load of carpet made in Spain. It came into Canada through Montreal…” He lifted his hands. “Why on earth didn’t they just bring it into the US through an American port?”

“I don’t know,” Mark lied, knowing exactly why, because he’d been through this before. The company that imports the carpet into Canada has the rights to this Spanish carpet for all of North America. They house it in their warehouse a few days to mark up the price, then ship it to the US so they can take their cut. The problem is that carpet is a textile which is a complicated import, especially when it’s designated for resale – like this carpet. There’s also a question about quota, which might or might not be a factor with this particular load.

“The guy in there…” He indicated the CBP building with a jab of his thumb, “…it’s like his second day on the job and he’s trying to impress his boss with my load.”

“Yeah,” Mark said flatly. “Some loads to the US can be tricky.”

“Tricky? This is more like unreal.” Manny sighed. “He’s asking me what the purpose of the carpet is, like I would know that.”

Mark said nothing at first, but he was thinking, bad answer. Finally, he asked. “What’d he do then?”

“He started getting real nasty with me, asking me if this was a formal consumption entry and if it was, did I file a formal warehouse entry? Then he asked if I’d filled out an entry summary and acquired a CBP Bond?”

“I think so. I don’t know. I’ve filled out so many forms my fingers are aching.”

“You don’t have to fill out all that many forms,” Mark said. “Just the right ones.”

Just then the CBP officer exited the building and started walking toward Manny and Mark.

“Here he comes,” Mark said. Manny looked left and right, like a scared animal at the business end of a shotgun. “Let me hide in your truck.”

And then the officer was on them.

“Hi there,” he said. Then he noticed Mark was there too and he waved. Mark returned the wave, then gave his friend a wink.

“What now?” Manny asked. “These carpets may be subject to quota restrictions,” said the officer. “I’m wondering if you know the carpet’s Harmonized Tariff Schedule classification number.”

Manny looked at Mark, and then at the officer. “Shouldn’t you know that?”

“Yes, normally I would, but our computers are down and it would have been a lot easier if you knew the number.” A shrug. “No worries, I’m sure it’s somewhere in the office in some book.” And with that he spun on his heels and walked away.

“You could be hauling a load of knock-off Gucci bags and Steve Madden shoes that would be confiscated along with the trailer they’re sitting in.”

“Okay, so it could be worse…that doesn’t make this situation any better.”

“I suppose,” Mark said, “but I’m wondering why this is happening to you at all. Didn’t you use a Customs brokerage for this load.”

“The one that quoted you the cheapest price?”

“You know the saying, ‘You get what you pay for?’ Well, it’s an old adage because it happens to be true.”

“But they’re a big company.”

“Nothing wrong with that, except big companies deal with lots of clients and they don’t always have the time to spend on one trucker’s single load.”

“Well, this one could have used a little more attention,” Manny said, defeat in his voice.

Mark put a hand on Manny’s shoulder. “Next time you’ll be better prepared.”

A sigh. “I supposed you got through with no problems?”

“Buddy,” Mark said, enjoying the moment for all it was worth. “They couldn’t let me in this country fast enough.”

“Why am I not surprised?”

“You’ve got to look at the bright side of things.”

“I’d been driving over eight years before I learned everything you’re learning today. How long have you been driving for?”

“So you should consider yourself lucky, being seven and a half years ahead of me on the learning curve.”

“Believe me, you are,” Mark said, saying good-bye and walking off toward Mother Load.

As he got into his rig, Mark took one last look at Manny. The man was sitting on a concrete curb, holding his head in his hands and looking as if he didn’t have a friend in the world.

But of course he did have a friend, a friend named Mark Dalton.

When Mark was on the outskirts of Buffalo, he took out his cell phone and made a call.

“Hey Joe, this is Mark Dalton calling.” “Hi Mark, I saw you there, but I didn’t want to say anything. But I did get the right guy, right?”

Mark had met Joe Fillinger in a steak-ho
use in Niagara Falls, New York a few years back when Mark was on a stopover and Joe was just starting with the CBP. They’d kept in touch, talking about sports and US Customs whenever they could.

“Most of his paperwork’s okay. There’s not a lot more I can do.”

“Hang onto him for another hour or so, then cut him loose. I think that should be enough to give him the full border crossing experience.”

“Thanks again. I really appreciate this.”

“Hey, if it makes him better prepared the next time he enters my country,” said Joe, “then I’m just doing my job.” •

– What’s next for Mark Dalton? Find out next month.