WINNIPEG, Man. – Since their beginnings in 2006, Razir Transport Services has managed to do business the right way in the Great White North and have now taken their certified brand south of the border.

With approximately 45 trucks and 75 trailers, Razir hauls frozen beverage and food products, or anything that requires temperature control and is time-sensitive. 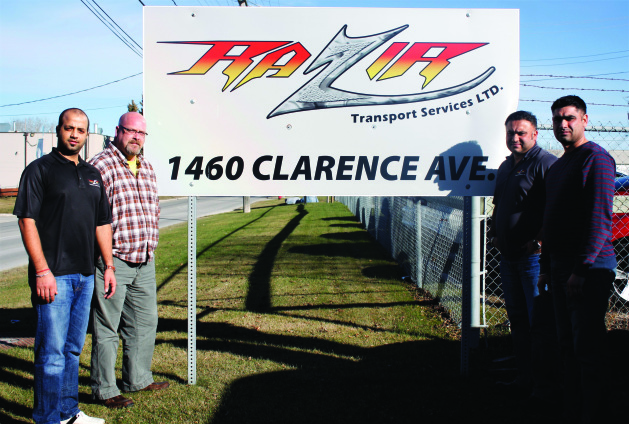 But it’s not enough for the Winnipeg company to move a product from one place to another; Razir likes to prove to its customers that they are doing things the right way.

As company logistics and sales manager Craig Barkman said, one of the biggest accomplishments Razir achieved in the past year was to become certified under Hazard Analysis and Critical Control Point’s (HACCP) food safety program.

“It’s basically keeping the food chain intact from production through transportation up until delivery,” Barkman said, adding that more companies these days are looking to become HACCP certified. “It’s becoming a more popular thing in the last few years. There are still not a lot of companies that have it, especially trucking companies.

“It’s something that is a selling feature. If we go knock on someone’s door for the possibility of new business…hey, we’re HACCP certified, and the next door to us, he’s probably not.”

Razir is also one of only a handful of companies that is certified under Iron Apple’s Food Safety Training for Carriers Transporters, Brokers and Shippers.

With between 40-45 drivers, two of whom are owner-operators, and 15 office employees, Razir’s roots stem from the road.

Amandeep Grewal, co-owner and accounting manager, was driving a truck since the year 2000 as an owner-operator, and said he starting in the business along with his brothers, including Hardeep Grewal, who is the safety and compliance manager for Razir.

Hardeep said the experience he and his brother have attained as drivers translates over to running a business, in that they understand what their employees need to get the job done.

“We know exactly what the driver needs,” Hardeep said. “We try to do our best so that the driver has flexibility with time for delivery and for pick-ups. There is a lot of stress while driving, so we give our drivers extra time to get that stress out.”

Changing times and a changing economy can also add stress, particularly as a business owner and for those looking to help grow a company.

“It’s more and more competitive each and every day, and customers are demanding more and more from everybody, every day,” Barkman said of the current economic climate and the recent downturn in Alberta. “It’s not just, pick up a load and deliver it whenever you want; there’s people checking up on you on a daily basis wanting to know where the trucks are and how their freight is doing, but there is no extra pay. We are having to do more for the same amount, or less, because everybody else is trying to get that piece of the pie as well.”

But for Razir, keeping drivers and customers happy is the primary objective.

“I think the industry as a whole is getting better and think the economy is turning around slowly and going in the right direction,” he said.

One direction Razir is going is south.

The company sent its first truck across the border and into the US in early November, and for Salil Prabhakar, assistant accounting manager for Razir, their venture south will hopefully help double the amount of business the company does in the next five years.

“We’re starting a new division,” Prabhakar said. “Till now we were just within Canada, and this month onwards we started doing the US also.”
Barkman said they hired a new sales and logistics manager to help with the company’s cross-border endeavor.

“Obviously the laws are different, and there’s border issues and paperwork,” Barkman said. “I’m sure there’s going to be some challenges and obstacles, but we’re looking forward to it.”

Technology is another key focus area for Razir, with the primary goal of keeping their drivers safe.

“As a former driver, things have changed a lot,” Barkman said. “Nobody likes change, but ultimately it happens all the time and you have to deal with it and accept it. Sure there’s going to be some older guys out there who were driving when there were two sticks on the floor and now everything is automated.”
Barkman said they were in the process of installing dashboard cameras on all their trucks, but not for the purposes of playing ‘big brother’ with their drivers, but rather to keep them from getting into trouble in event of an incident.

Barkman chronicled a recent incident with one of their drivers who was involved in a collision where a pickup truck coming around a curve collided with the transport and the driver of the pickup was texting during the crash, which the dashboard camera captured on video.

“Unfortunately, what it comes down to is covering yourself,” Barkman said. “But it’s a small expense to pay instead of going through a huge court case.

“It’s a proven cost-effective way in the unfortunate case where there’s an accident, you’ve got proof right there. Customers definitely like that.”

With regards to greenhouse gas emissions, Prabhakar said Razir recently established a team that is tasked with addressing the amount of emissions emitted by the company, something they take into consideration when purchasing new equipment.

He also said all of the company’s trucks are monitored by GPS in an effort to help drivers if there is an emergency.

As for electronic logging devices (ELDs), Razir is preparing for the device’s mandated usage by the government, but are waiting to see what the new regulation will look like.
“Electronic logs…we know it’s coming, there’s nothing we can do about it, we have to accept it, learn it, live it and move on,” Barkman said. “Some guys are probably going to leave, unfortunately, but for the most part, I think everyone will realize down the road that it’s a good thing and we should have done it a long time ago.”

Razir is hiring drivers at this time, and those with mountain experience are encouraged to apply at www.razirtransport.ca.

“We’re always looking for good, experienced reefer haulers with mountain experience,” Barkman said. “We could use one right now. Guys come and go, it’s the nature of the beast, but I think our turnover ratio is probably a lot less than some companies.

“We’re going in the right direction, the industry as a whole.”