KELOWNA, B.C. — Heroes come in all shapes and sizes. Some wear a cape, others have a mask or possess super powers, but the special ones have the ability to inspire others to be the best possible version of themselves.

For Jordan Wilson, recognizing his hero was easy.

Wilson’s grandfather, Hugh Fitzpatrick, was a man who loved to work. But even more so, he loved to give back, and that was one of the many traits that made him a hero.

Hugh may be gone, but the company he created with his wife, Jaquie Fitzpatrick, and Wilson’s uncle, Dock Fitzpatrick, endures. 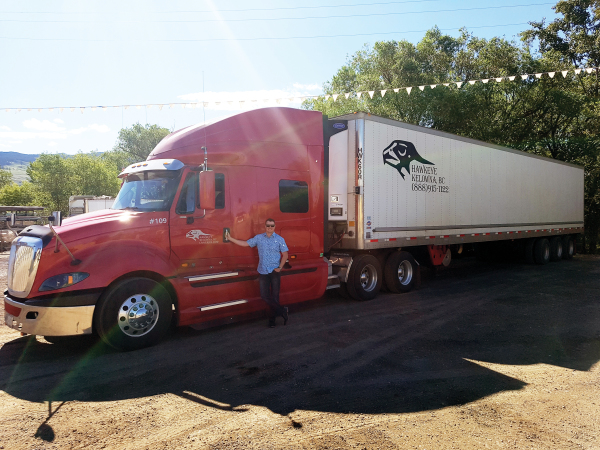 Hugh, Dock, and Jaquie started Hawkeye Holdings in 1988, but the McLean and Fitzpatrick packing house was launched in 1922 by Wilson’s great-grandfather, and today, Hawkeye resides in that same building.

The company is now made up of four divisions – warehousing, seedling storage, property management, and trucking.

“When they started Hawkeye, they didn’t even take a paycheck,” said Wilson. “They took a very small amount for the expenses and (my grandfather) worked just because he loved to work. He was 84, and up to 30 days before he passed away, he was in the office.”

Following in his grandfather’s footsteps in more ways than one, Wilson serves as a board member for the British Columbia Trucking Association (BCTA).

“With an industry that’s given so much to me and my family,” Wilson said, “I really think you should give time back and do what you can to better the industry and better the city.”

This was a lesson Wilson learned from his grandfather, who used to serve on various committees and boards in Kelowna, a city he loved.

“I look up to the dedication he put into building his company, his family, and this city,” Wilson said.

Wilson admits that many who make up the younger generations do not have the same approach to their professional life as those like his grandfather once did. Moving from company to company has become more prevalent and expected in today’s society, but high turnover is one thing Hawkeye has been able to avoid.

Several Hawkeye employees went to high school with his uncle Dock, and have even returned to school to further their education in an effort to step up into various positions within the business to help it succeed.

The company atmosphere is a key reason for the low turnover rate, one Jordan said places an emphasis on kindness and is a family-friendly environment that treats its employees with respect.

“My uncle believes that you don’t lay people off,” Wilson said, “because when it’s busy again, you won’t find a good driver.”

Hawkeye’s busiest time for its trucking division is during the construction season, which lasts up until October in the Okanagan region. And when things start to calm down, most of their gravel trucks sit idle.

Wilson said if drivers get laid off during the slow season, they will simply go look for another job, and when the busy season starts up again, Hawkeye would be faced with having to find quality drivers year after year.

“It’s hard to find drivers, and we have some really good drivers,” Wilson said, “so we have drivers who are on all year long and we’ll put them in the shop and they help fix equipment. We’ll move them around and they’re very happy with that and don’t have to worry that they’re going to get laid off.”

Hawkeye, and particularly Wilson, wouldn’t have the empathetic approach to business they do today if it wasn’t for the example set by their founder and hero.

“The amount of time that he dedicated to work to make sure that his family was taken care of and all his employees were taken care of,” Wilson said of his grandfather, adding that he was amazed by the number of people who showed up to his funeral.

Wilson’s grandmother passed away six months prior to his grandfather after losing a battle against cancer. Hugh’s permanent smile turned to a perpetual frown after his wife’s death, passing away shortly after of what Wilson believes could only have been a broken heart.