WINNIPEG, Man. — Walking into Bison Transport’s head office in Winnipeg, you wouldn’t guess you were looking at the inner-workings of one of the largest trucking companies in North America.

Boasting a dynamic and diverse employment base, staff members young, old, male, female, and of various ethnic backgrounds work, relax and play, showcasing the changing landscape of the industry from its simpler beginnings to the more complex and technology-driven force of today. 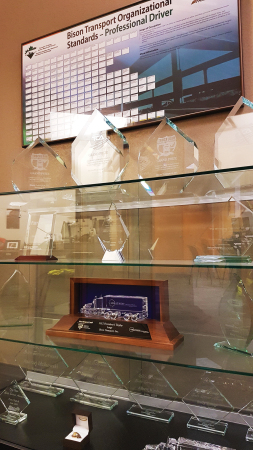 I was part of a tour of the Bison office while attending the Canadian Transport Research Forum’s 2017 conference May 29, and for the first time was able to climb into the company’s onsite driving simulator, when I proceeded to kill two deer and likely myself and passenger in the span of three to four minutes. But that’s not important, so I’ll digress and get back to this later.

Aside from an unexpected youthful vibrance, Bison exudes – and underscores with vocal and visual pride – a culture of safety in its head office and presumably beyond.

Garth Pitzel, Bison’s director of safety and driver development, facilitated the tour, and said looking back to the 1980s, safety was more of an afterthought than anything else. But around the year 2000, Bison began meshing compliance with safety, and as Pitzel put it, became a “culture of caring.”

From then, Bison did not just train its drivers to be compliant, but also invested in skills development, and in 2005, the company won its first Truckload Carriers Association National Fleet Safety Award.

And as Pitzel pointed out, 11 years later, Bison has added the award to its mantel every year since.

This 180-degree shift in attitude is what launched Bison’s corporate motto: You’re safe with me.

Bison’s driver turnover rate is 20%, but prior to its focus on safety, that number was between 40-45%, and as Pitzel said, the most likely time for a driver to get into a collision is during their first six months on the job, so in turn, if a company experiences high driver turnover, they are statistically more likely to see their drivers get into an accident.

Also, because of Bison’s size, the company keeps its drivers busy.

“We have freight to keep our drivers moving,” Pitzel said. “They don’t sit on the road.”

Last year, Bison had its first driver hit three million miles, accident-free. There are currently around 1,900 drivers who work for the company. To show its appreciation for safety, Bison has paid out $28 million to its drivers as part of its Safe Driving Award Program, something Pitzel said brings a return on investment, but the company does it because “it’s the right thing to do.”

Don Streuber, executive chairman of Bison, said the company, which started out as a paper hauler – a product that now makes up 10% of what it transports – preaches transparency and honesty, and the fact the boardroom we occupied at the time was confined by glass walls with little privacy to speak of, shows efforts to do just that.

Streuber said aside from wanting to see better harmonization across the provinces, Bison looks to take advantage of every opportunity it can to get its driver across the Canada-U.S. border quickly.

Bison drivers cross the border around 70,000 times each year, and it has about 12 employees in its customs department dedicated to getting drivers into the U.S. and back to Canada as smoothly as possible.

Departments I saw on my tour were chalk full of young employees, men and women from a variety of backgrounds. I mention this again because concern over who will take over for the current flock of soon-to-be-retired workers has been talked about a lot of late, and for good reason.

If Bison is any indication of where trucking can go, all signs point to a bright future for the industry – one where technology is a focus for the youthful computer-savvy job seeker and in turn opens up opportunities for those who perhaps don’t want to be a driver and away from home so often.

Pitzel said Bison had 15 liquefied natural gas (LNG) trucks three years ago, but they are no longer in their fleet, as they were off the road two to three times every week, making them unreliable, and there is little infrastructure for refueling.

He added the best thing Bison has done to help curb greenhouse gas emissions was to invest in long combination vehicles (LCVs) in 2002, which has significantly reduced the company’s miles per year.

“We cut 32 million miles out of our records when we haul turnpikes,” Pitzel said.

As for the hot-button issue of 2017 – electronic logging devices (ELDs) – Pitzel said Bison has been using e-logs for three years, and is not concerned about the impending U.S. or Canadian mandate whatsoever.

One thing Bison would be worried about, however, is if I was behind the wheel of one of its trucks driving through a snowstorm in the mountains.

During my three- to four-minute stint as a Bison driver, I was slipping and sliding all over the road, nearly had a head-on collision with a police car, killed two deer that jumped out in front of me, and ended up going into the opposite lane and off the road into the ditch. I may not have died from the incident, but I’m sure Bison wouldn’t have been happy with my performance.