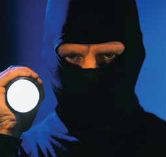 Criminals are paying attention. In fact, they’re probably reading this right now. That’s the lesson that this particular trucking journalist learned the first time he wrote a story on cargo crime, when a certain member, or wanna-be member, of a notorious crime organization known for riding on two wheels called him up to express disagreement that the organization was, indeed, one of a criminal nature. Then he told the journalist that the carrier mentioned in the story better watch what he says or “they could have his yard cleared out in an hour.”
Not that they’re a criminal organization or anything.

The magazine that he read the article in was laying around a mechanic’s shop somewhere. Whether it was at a dealership or an independent garage or at a carrier’s yard is unclear; what is clear is that it was a place where this gentleman was getting his truck fixed. Meaning that he was in the trucking industry, working for a carrier. You may have hired him.

Garry Robertson, national director of investigations with the Insurance Bureau of Canada (IBC) is right in the middle of the recently launched Cargo Theft Reporting program that seeks to unite carriers, insurers and law enforcement in a coordinated attack on the estimated $5-billion a year problem. The program, still relatively new, is using the data from reported cargo thefts as a way to better understand the problem.

If you want to minimize the size of the target you have on your fleet for cargo crime, look internally first, recommends Robertson, especially “if you have ongoing issues, now is the time to look inside your company.”
It starts, like most things, at home. Your people, your yard, and how much control you have on your property when it’s in transit.

“Ninety-percent of cargo crimes, I think, are usually generated from internal sources. That’s what I believe,” says Paul Enright, co-owner of Direct Right, speaking to me from their Brampton, Ont. offices. “We screen drivers before hiring them, making sure they don’t have a criminal record. That’s critical,” he stresses.

Hiring people with clean backgrounds is only the first step. Giving those people tools and education is the next step.

“They gave us a padlock when I started and they said ‘when you go for lunch, stop for coffee, whatever, put your pad lock on’,” explains B.C.-based owner-operator Dan Dickey. “All of our trucks have GPS, we all have electronic logs. And you can’t just wander into one of our terminals because there are codes everywhere.”

“Drive around any truck stop,” Dickey says when asked if he sees a lot of trailers ripe for the picking. “A guy can pull up to any old trailers. It’s constant. A truck breaks-down and sometimes you see that trailer sitting on the side of the road, ready to be stolen.”

Padlocks and codes only go so far, however, and this is where education may be just as important as physical deterrents. Robertson points to “social engineering, where you’ve got people talking to drivers at rest stops, finding out what the loads are, what the transportation routes are — all of that.” Training drivers to be vigilant of the people asking lots of questions is key. So, too, is feedback from drivers, Robertson says. “If there is some information that they have, getting that back to us is helpful,” he explains, pointing to IBC’s recently launched tip line, an anonymous way for drivers to share what they’re seeing.

Your yard and in-transit

Out of the data that IBC has collected so far, an unsecured yard is one of the most prevalent bad habits out there. “The analysis we have right now is the type of yard they are being dropped off at,” he explains. “Some go missing in transit, but a lot has to do with the yard: there’s no security at the front gate, cars can drive in and out and there’s a load sitting there. No pin-lock, not blocked-in, and just sitting out there like low-hanging fruit.”
“Everyone follows the procedures and policies,” Enright says of his staff. “When we have drivers come in on the weekend, we bring in dock staff to unload that trailer. Nothing, and this is the key, nothing is left in our yard. That policy applies right across the system. If for some reason the customer doesn’t want the freight, it’s in our warehouse under lock and key.”

The last time Direct Right did accidentally leave a trailer in the yard, it went missing, stolen almost on cue. “One of the boxes in that trailer said Panasonic on it, but it was full of rags. So what happen was, somebody broke in to the yard and stole the whole tractor-trailer load. They probably thought they hit the motherload, but then they opened the boxes and just found rags. These guys were bold as heck. They came in the middle-night, and we got them on camera, but they were smart: they covered their license plate and were running around in masks to steal this trailer. And they went right to that trailer, there was nothing else in the yard they wanted.”
Direct Right is fortunate in that most of their business is intermodal. “Nothing sits for us. When we pick it up from the rail yard, it goes right to where it has to go. The railways are a safe, clean way to do business. Everything is scanned and I can give you list of a 100 trailers that are on the CN or CP sites right now.”

Regardless of what type of moves your company does, the lesson here is creating a system where every piece of product is locked down and monitored. “I can go online anytime and see the cameras. We can monitor the dock 24/7. If I want to see what’s going on at 10pm on a Friday, I can go look. That’s a real deterrent.”

It’s an approach that any carrier can mimic on a local level. “We’re very active in Peel Crime Stoppers. We attend all their golf tournaments, all their functions because it’s a good thing that the police know where we are, what we do.”

Insurers have helpful information, too. “We’ve got prevention methods,” Robertson says. They are able to look at the trends and research and identify patterns in cargo crime. We want people “working with the insurer or the broker, asking ‘can I do this, should I do that’ and working together. We want recommendations going back and forth. You know, O/Os have questions, let’s put those to the insurers and get them answered.”

Nothing says “Steal This Trailer” like a big, shiny decal on your equipment. If you’re a thief, looking at two different tractor-trailers and one happens to have a “Samsung” wrapped on it, which one are you going to steal?
“Some of the customers in this industry will require customer trailers with decals on them, whether it be Fuji or something else. And that’s a real target,” notes Paul Enright, co-owner of Direct Right Cartage.

“I’ve seen some dedicated fleets where you have BMW down the side. That’s a huge indication. We try to limit customers putting stuff on our trailers, we do do it, but we try to limit it. Especially on high-value stuff.”
You may want to consider doing the same.

Over 30 years as an advertising salesman for Truck News.
Graduated York University Bus. Admin. in 1975.