February 1, 2000
The link between rubber and silicone may be closer than you think.Tire manufacturers have been struggling for several years to incorporate computer chips into their rubber - developing a new generatio... 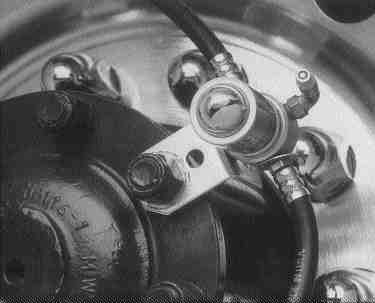 UNDER PRESSURE: Inflation-checking devices such as this Cat's Eye could see new competition, thanks to "smart tire" developments.

The link between rubber and silicone may be closer than you think.

Tire manufacturers have been struggling for several years to incorporate computer chips into their rubber – developing a new generation of “smart tire” to help track everything from pressure to temperature and the tire’s history. Knowing when and how often a particular tire has been retreaded or mounted, for example, could help track the cause of premature tire wear. Spotting a drop in pressure or an increase in operating temperature could mean the difference between patching a tire and watching it shred away in your West Coast mirror.

It isn’t science fiction, either. Such technologies exist. But relatively high costs have kept them from flooding the open market.

“We’ve got tires running,” says Goodyear’s Al Cohn. “It comes down to what fleets are willing to spend for the chip … The technology is not at that $3 (per tire) level.”

Then it’s a matter of approaches to reading the information.

“We’re looking at an in-cab, a drive-over and a handheld (device),” Cohn says of Goodyear’s efforts to read the RF signals from its test chips. “Whatever system will do the job at the lowest possible price is going to be the one to take off.”

While Goodyear also is evaluating new and cheaper materials to make such a chip, engineers also have to consider a design that will last through the retreading process, and the miles of wear that can span several years. And that life varies greatly from one application to another, he says. While a linehaul tire may be retreaded two times in its life, a waste hauler could see several more lives as long as the sidewall isn’t damaged.

Bridgetone has probably been the most vocal about research efforts, and has been working on its “Smart Tire” initiative for more than five years.

“We’re still working on all aspects of the technology,” says Guy Walenga, engineering manager for commercial products. “We (tire manufacturers) are all still shooting at the same moving target … it has to be as durable as a tire is durable.

“It has to be absolutely bulletproof.”

It’s a misnomer simply to look at the Smart Tire systems as chips because they also have to incorporate sensors, a power source, memory, a radio and antenna, he says. For now, Bridgestone’s goal is a system that fastens to the inside of a tire. Eventually, the plan is to develop a version that’s small and light enough to be built into the tire itself.

By adding five digits to a traditional DOT number that tracks such things as the batch from which a tire is made, each tire will even have an identity of its own to help track cost and performance. The systems will also track information on such things as pressure and temperature, but there’s still the question of what information should be sent to the driver through an on-board reader in the truck, and what data is only interesting to a fleet, Walenga says.

“I still think it’s a few years down the road,” he adds of commercial availability, saying it will probably appear in off-road equipment first.

It has. Michelin’s Earthmover Group has been successful in mounting its system inside the tires of mining equipment, much like the patch for a nail hole. And there’s hope for a highway application in the future.

A sensor in the Michelin Earth Mover Monitoring System patch reads pressure, temperature and the tire position, while the information is fed both to handheld monitors and an in-cab reader.

Whatever system is used, a crucial link in the network will be software that can crunch the data and track the tires, Clark says, referring to his company’s Millennium Suite. “A sensor in the tire is just a sensor in the tire.

“This is where it all ties in.”

Still, tire makers aren’t the only companies developing devices to track such things. Some aftermarket manufacturers are offering sensors of their own that mount to truck wheels.

Eaton sensors mounted on tire rims can send a radio signal by using incorporated valve stems as an antenna, offering an in-cab “check tire” light when pressure changes by more than 15 per cent. (It’s virtually identical to the Schrader-Bridgeport sensors found on Corvettes.) Last year Eaton coupled that system to a central tire inflation system that maintains operating pressures. Those systems are also available from such companies as Meritor/PSI, Vigia and Tire Pressure Control.

Even a close eye to nothing but tire inflation can do more than extend tire life. The Saskatchewan Wheat Pool began an experiment with Central Tire Inflation systems last year that allow it to haul heavier weights on secondary roads by manipulating air pressures on the fly.

It’s amazing what you can do with the right information. n