HOW TRAGEDY LED TO A SUCCESSFUL, AWARD-WINNING CAREER IN FLEET MAINTENANCE

I spent a good part of this morning interviewing Lloyd De Merchant, area maintenance manager, Eastern Canada, with Penske, who was recently named the Volvo Trucks Canada Fleet Maintenance Manager of the Year. Lloyd oversees 8,000 pieces of equipment across more than 20 shops in Eastern Canada. Told him I’d be in and out in 20 minutes or so and he patiently sat there and answered my questions for more than an hour. It was one of those invigorating interviews that makes me grateful I get the opportunity through my work to interact with the people that I do.

It was a cruel set of circumstances that got Lloyd started in the trucking industry. When Lloyd’s sister was six, and he was eight, they were playing in a playground near their house. His sister lost her mitten near the roadway and bent over to retrieve it. A tractor-trailer came barreling through the intersection and killed her. The truck’s brakes had failed. 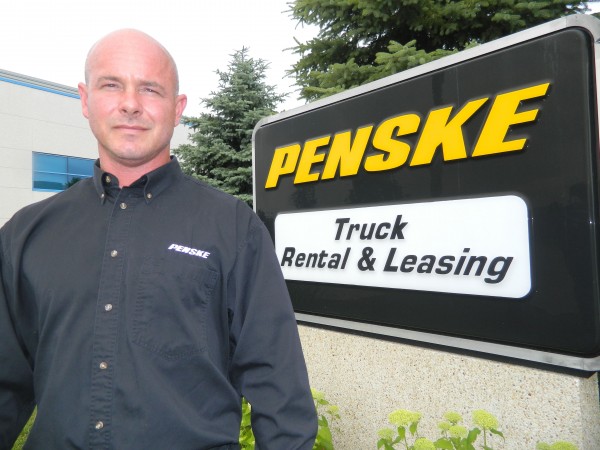 Soon after, Lloyd’s father started a trucking company, of all things. It was a curious choice of careers, given what had happened. He would go on to become one of the most safety-conscious fleet owners you could imagine. Lloyd recalled that each Saturday, his father would go to the yard and inspect every single truck – including owner/operator units – attaching to them tags that listed the items that needed attention before the truck would be allowed back out on the road Monday morning. Eventually, Lloyd began working for his father at the trucking company and soon after that, he had become a mechanic. Lloyd’s brother, meanwhile, became a truck driver. The three of them would each go on to do their small part to improve truck safety.

Lloyd’s father eventually sold the trucking company due to health problems but still drives truck on occasion. Lloyd’s brother took a sales job in the trucking industry. And Lloyd joined Penske in 1996, rapidly moving up through the company to his current role. He’s just 43 today. Probably one of the youngest Fleet Maintenance Managers of the Year and I’d bet, the first one to be on Twitter (@Lloyddarian). Watch for a full profile on Lloyd in the August issue of Truck News. I promise you it will be a great read. He gave me a ton of material to work with, so if it’s not a great read, that’s on me!