You can’t stop corrosion, but you can slow it down. That was the message at a recent Technology & Maintenance Council (TMC) discussion. And assembled at TMC to share tips on slowing the spread of corrosion was a decent-sized army of maintenance managers and other corrosion experts who wage war against corrosion every day. They presented an updated TMC manual that is chock full of best practices and tips on how to prevent the spread of corrosion. The 104-page manual can be ordered from ATA Business Solutions. 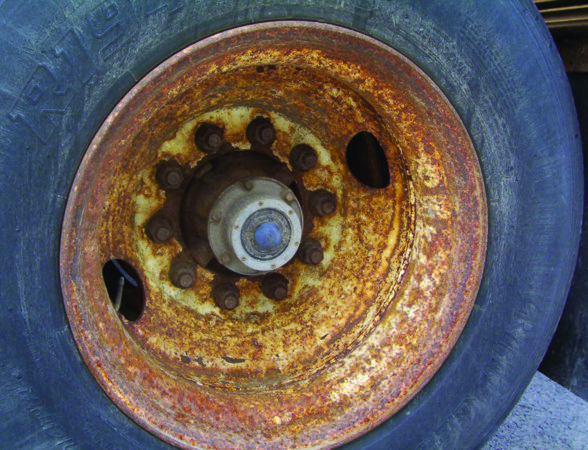 Roy Gambrell, a now retired “corrosion guru,” said it was only in recent years that the trucking industry began understanding the high cost corrosion was inflicting on the industry as municipalities began using increasingly corrosive road de-icing agents. It was TMC itself that began putting some real-world numbers to the problem.

Gambrell and others at TMC assigned replacement costs to the various components they were regularly replacing due to corrosion. For example, the replacement cost of a radiator was about $1,400 (all figures US), an air-conditioning condenser will run you $350, a fuel tank $750 and brake shoes and drums about $700.

The cost to the industry at large to replace wiring would run somewhere between $1.8 billion and $15 billion over the life of the full population of Class 8 trucks at that time. Replacing brake shoes and drums was another $3.6-billion expense industry-wide. Gambrell concluded in a four-year period, each Class 8 truck would need its wiring and two sets of brake shoes and drums replaced, as well as lights, a mirror bracket, a fuel tank and radiator. The total cost to industry? About $2.4 billion to $4 billion annually, Gambrell noted.

This doesn’t even include the cost of road calls, which add another $9 million per year to the tally.

“The more we talked about it, the more attention it got,” Gambrell recalled. “We realized we have a really big issue out there. We found out every component on the vehicle, from the front of the truck to the rear of the trailer, was being attacked.”

As TMC began to sound the alarm about the cost of corrosion, manufacturers and suppliers began coming to the market with improved, more corrosion-resistant products. The manual was released in 2012 after two years of development.

“It’s a living document. We will add to it each year,” Gambrell said.

Kevin Willis, fleet associate leader with Pepsi, said the manual was extremely useful when his company decided to implement a Lean Six Sigma project to reduce corrosion on its 38,000 assets in the US and Canada. Pepsi analyzed some 78,000 work orders to determine how much corrosion was costing the fleet. It traced about 25% of those work orders back to corrosion.

Tractor floors were rusting through and liftgates were needing replacement at a cost of about $20,000. Fuel tanks were being replaced in two to four years. Corrosion was forming inside wiring harnesses and wicking its way up the wires, breaking through at other locations and causing downtime.

A study out of Canada, in which two pieces of metal were bolted to the front bumper of a truck – one was treated with corrosion inhibitor and the other was not – caught Willis’s attention.

“The piece that had inhibitor did not have much rust on it but the one that didn’t was rusted away,” he said.

Pepsi has been using inhibitors in Canada for 10 years and it figures it saved about $5,000 per trailer as a result. Pepsi rolled out a corrosion prevention strategy throughout North America last year. It included washing equipment regularly and applying inhibitors annually. It sourced an outside vendor to apply the inhibitor at a cost of about $125 to $150 per vehicle, which was built into Pepsi’s annual maintenance budget.

“We put in a scheduled job once a year to apply the inhibitors onto our trucks,” Willis explained. “We are seeing $125 to $150 per occurrence which is not a lot of money when you think about what it costs to replace floors and liftgates.”

The project team that led the Lean Six Sigma initiative thinks Pepsi will save about $500 per tractor in cost avoidance each year.

It’s too soon to report on results of the project, Willis said, as this is the first full year it’s been implemented.

Todd Cotier, director of maintenance with Hartt Transportation Systems, is also a big believer in inhibitors. The fleet orders new equipment that’s been sprayed at the OEM modification center and then re-applies the inhibitor every year. Asked if the inhibitor causes serviceability issues with wiring harnesses, Cotier said it hasn’t been an issue.

Fleets on the panel also said corrosion of air tanks can be reduced significantly by servicing air dryers annually and spec’ing aluminum tanks. Pepsi services its air dryers at 70,000-mile intervals, Willis added, as moisture inside the air tanks is the main cause of corrosion.