Marathon men: Meet four truckers who run hard on and off the highway 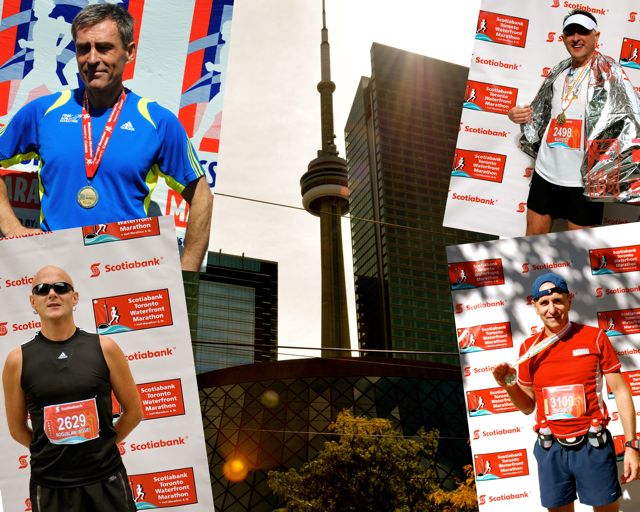 GUELPH, Ont. — Long-haul trucking is a physically demanding job. Not in the same way that, say, construction work is physically demanding, but by spending the bulk of your shift parked on your keister, spending your nights cramped in your bunk, and, often, eating your meals on the fly (read: fast food), the life of a truck driver is bound to take a physical toll over time.

But three truckers based in southern Ontario – all friends, no less – are bucking that stereotype and have been finding the time to train and compete in marathons.

Meet Boguslaw “Bogie” Wojewodka, originally from Poland and his fellow compatriots – both in occupation and in country of origin – Mariusz “Mario” Rozanski and Zbigniew “Ben” Ek, who each boast the physique of a true athlete.

While each of the three trucker/runners are impressive examples of athleticism (each between the ages of 40 and 50), it was even more impressive to discover that these three weren’t even the ringleader of the group. Marek “Mark” Nowakowski, a driver with Laidlaw Carriers and the unquestionable inspiration behind the group’s decision to take up running, was unable to get out of work the day of a recent interview and asked Ek to come in his place. In fact, there were even more marathon-running, truck-driving friends of theirs waiting in the wings. Was there something in the water in Guelph? Poland?

For his part, Wojewodka had been something of an athlete in his native Poland, having dabbled in competitive speed skating for many years during his youth. Though he had given some thought to taking up running as a teenager, it wasn’t until he struck up a friendship with Nowakowski that he took to the pavement.

“Mark has been doing marathons for seven or eight years now, with great success,” said the driver with Globetrekker Express. “He has completed five world major marathons already  He was a major inspiration for me, that’s for sure. I thought to myself, ‘If he can do it, why can’t I try?'”

As the youngest of the group – just shy of his 40th birthday at point of interview – and as a former athlete, it was clear how he might more easily slide into the role of “marathon runner,” but what about the other two?

“I started running two years ago when I noticed that my pants were getting too tight, and I decided that I had to do something about it,” said Rozanski, a driver with Verspeteen Cartage. “Since then, I’ve burn about 150,000 (calories), according to my watch. Mark was my inspiration too, and I have been running for two years.”

At 50 years old, Ek, the eldest of the group and a driver with XTL Transport, was inspired by Nowakowski – and a desire to improve his health – to start running about four years ago, and within six months, he had ran his first half marathon.

“I was out of shape driving a truck, changing the seats because my back hurt so badly. I couldn’t think of anything else to do with myself in terms of physical fitness. My knees hurt and I was overweight,” Ek said. “When I started four years ago, it was painful; I couldn’t run half a kilometre. Then I slowly progressed to longer runs, and after two weeks I decided that I was going to prepare for a half marathon the next year. Then I started to feel more pain, but I didn’t give up. I knew that the benefits were going to come, and they did.”

Though their age and current fitness level was not enough to deter them from taking up the sport, how, as long-haul drivers sometimes driving in excess of 3,000 miles per week, could they possibly find time to train to the elite level of fitness required for marathon running?

“Sometimes it is really hard to manage time at work and training. We try to train three times per week. We go training on Tuesday, Thursday and Sunday,” said Rozanski. “For me, there are days that I had to set up my alarm clock at 4 a.m. to do my training before I go to work. There are days that I am very tired, and I have in my mind that I have to do my training to achieve that result of half a marathon. So far I’ve run five half-marathons and a few 10-kilometre (races), and I will be running my first full marathon on Sept. 26 in Toronto.”

The group of drivers often referred to their decision to take up running not as a hobby, but as a passion. And they clearly weren’t bluffing.

“It’s not just a hobby in my case, it is a passion,” said Wojewodka. “I love what I am doing, and I am doing it because I know I can, and everybody else can do it too. I know I can do better and compete with serious runners who have more time to prepare themselves. That is what drives me, and that is fuel to my brain. In our case, with our families – wives, kids and a house that needs to be taken care of – it is really difficult to do what we are doing. We might not be seen as typical truck drivers, but we are. We spend so much time on the road, and in between our regular training we put in sometimes over 3,000 miles each week. It makes it even more exciting for us to challenge ourselves, knowing that you have to do what you have to do to provide your family with what they need, and on top of it do what you love to do, which is running in our case.”

So what kind of results are possible with that kind of dedication? In Wojewodka’s case, he finished 89th out of a roster of more than 2,700 runners at the Scotiabank Toronto Waterfront Marathon on Sept. 26. Rozanski finished the same race (his first marathon) in 542nd place with Ek finding his way into the middle of the pack in 1,361st position after having some trouble with cramps.

So, for any truckers out there looking to get back into shape, Wojewodka offers these sage words of advice:

“First of all, you have to set up your mind. You have to be sure that you want to do it.  Anyone can do it,” he says. “You might not run a full marathon right away, or even within two or three years, but at least go get a proper pair of shoes for yourself and give it a try. It is going to hurt for the first few days, but in the end the benefits will come, and you will see the difference.”

“Just like a truck, try not to grease your truck for a month or two and you will see what will happen. It’s the same with your body,” he adds. “If you are sitting for who knows how many hours a day, and then you get out for half an hour at most, that is about the exercise you are getting for a day, you will see the difference. You will feel the energy, because your blood will flow better and faster. It is in your mind.  You have to set up your mind properly first, and then you can do it.”

3 Comments » for Marathon men: Meet four truckers who run hard on and off the highway