Testing your faith in technology

We’ve all read about the move technology has been making toward a fully-automated system, and the challenges that have accompanied the effort – one needs only look at the incident in Florida last May, when a person was killed after putting their Tesla vehicle into autopilot mode and the car failed to recognize a white tractor trailer against a bright sky. But the Wingman Fusion is not intended to operate a truck, it’s only meant to assist the driver when danger lies ahead.

“This system is designed to help drivers keep their trips safe and uneventful, and do it with minimal interference,” said Jason Skoog, Kenworth assistant general manager for sales and marketing. “Bendix Wingman Fusion can help drivers maintain safe distances, mitigate collisions with other motorists who change lanes suddenly, and safely operate in rapidly changing and difficult-to-see conditions like snow, rain, fog, dust, or smoke.”

I was able to experience the Wingman Fusion in action first hand, and not just from a spot on the side of Paccar’s test track in Bellevue, Wash., but from inside the truck.

The first of the many features of the Wingman Fusion I was able to see was what happens when a driver is following another vehicle too closely.

Using radar, a camera, the vehicle’s braking system and Bendix’s SafetyDirect system, the Fusion quickly recognized the car in front by detecting the safety distance gap between the truck and vehicle, which can be set to nine different distances to fit a fleet’s specific needs. It also changes from city to highway mode once the truck reaches a traveling speed of 37 mph (60 km/h)

When the alert was ignored, and the truck continued at the same speed approaching the slower-moving vehicle, it automatically braked to avoid a rear collision.

Next was speed recognition.

As we traveled around the 1.5-mile track at 37 mph, we passed a speed sign that indicated a 30 mph limit, which the Wingman Fusion acknowledged and notified the driver that he was driving too fast.

Though the Fusion does recognize speed limit signs in Canada, the US and Mexico, it does not identify limits in construction or school zones.

The Fusion also tells the driver if they make a lane change without signaling, which could indicate the move was unintentional.

The most dramatic moment during the three-lap demo around the track was the stationary vehicle braking to avoid a rear-end collision.

This was partially exhibited during the first and second loop – the first traveling rather slowly and the other allowing the driver to maneuver around the parked vehicle – but for the final demo, we were traveling around 37 mph and came to a hard stop to avoid a collision, which likely took the test driver a few attempts before building up the courage not to hit the brake himself out of instinct.

A Kenworth truck with Bendix Wingman Fusion automatically brakes to avoid a rear-end collision with a parked car.

As Skoog mentioned, the Fusion can detect stationary items and issue following distance alerts even in low-visibility situations by using the radar, but the camera sees what the driver would see, so caution is recommended when driving in fog, snow or smoke.

I asked whether the Fusion, given the hard-braking nature of the track demo on dry pavement, would work well in Canada’s snowy conditions, where slick, icy, snow-covered roads are an issue for a good part of the year. I was told because the detection distances can be adjusted to assorted distances, the Fusion can help initiate the braking system much sooner on slippery roads. But, because the system is not intended to replace the driver, but rather help them drive safer, different road conditions tender varying results.

Fusion is an evolution of the previous Wingman Advanced. Though it is not standard in Kenworth’s Class 8 trucks, Fusion is in about 30% of the T680 models.

“We always talk about when will autonomous commercial vehicles happen,” he said. “I think that’s still to be determined, but the one thing we do know is that every year technology (is) assisting drivers and fleets to make trucks safer and more productive. It evolves every year, and we’ll continue to ensure the technology, Wingman Fusion is the perfect example. When each of these driver assisted technologies is released, it feels natural when they come out.”

Baney showed a slide estimating that automated trucks could be coming down the pike around 2025, but, along with Kenworth general manager Mike Dozier, cautioned that the timeline was not set in stone.

“The things that the drive to autonomous will enable will be hugely beneficial to customers,” Dozier said. “Could (that timeline) change? Yes, it probably will. But it’s all about what it enables along the way.” 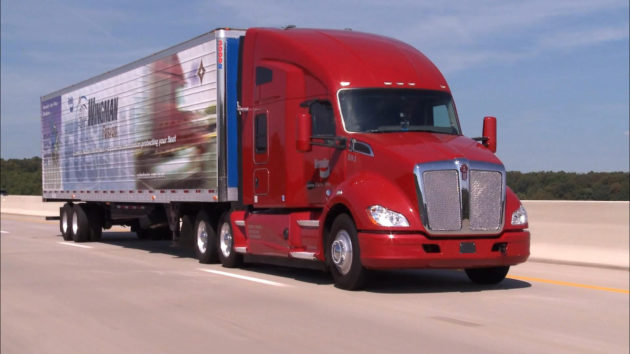 3 Comments » for Testing your faith in technology