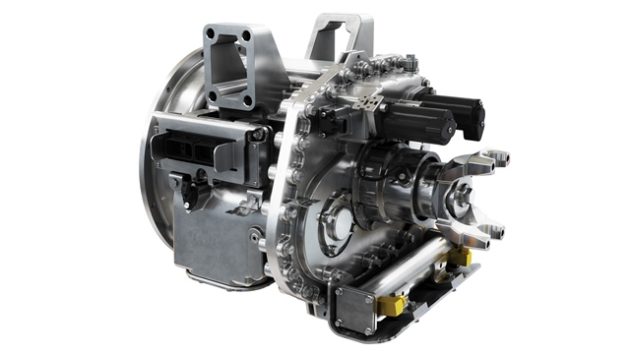 Eaton’s eMobility business has a new four-speed transmission for electrified Class 7 and 8 commercial vehicles, and it’s scheduled to debut in 2022.

The model adds to an existing portfolio that includes medium-duty two- and four-speed models that are currently in production.

Tests are currently underway with major OEMs, the company says.

The four-speed transmission solves a key issue linked to single-speed drives – the need for high efficiency at top speeds, and also increased torque when launching the vehicle and at low speed.

While the transmission is based on the lay shaft architecture found in automated manual transmissions, it has been designed for electric commercial vehicles. The four-speed EV gearbox doesn’t have a clutch, and the shifts are synchronized using a traction motor. It also operates at higher speeds than gearboxes for internal combustion engines, and the gears are optimized for the power curves of electric motors.

The transmission offers a higher output speed and torque range than a direct-drive system, allowing for smaller electric motors to be used in large commercial vehicles.