April 1, 2007
TORONTO, Ont. - Reading so much about wide-base singles made me curious to try them. So I started salivating as soon as I noticed Purolator testing a couple of sets on matching tractor-trailers betwee... 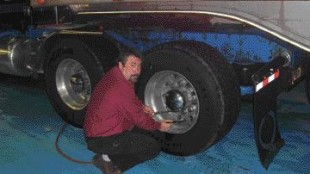 TORONTO, Ont. – Reading so much about wide-base singles made me curious to try them. So I started salivating as soon as I noticed Purolator testing a couple of sets on matching tractor-trailers between Toronto and Boucherville, Que.

As a run coverage driver, it took me a couple of months before I finally got to ride on a dime of donuts (this is a 10-wheeler now, not 18). But I got my turn this winter under some pretty varied conditions. Most everything about them was impressive: the ride, the handling, their stick-to-the roadness. There’s also a different resonance inside the cab, cleaner harmonics, less resistance on the road, the sound of one tire slapping, not two.

Sure-footed and comfortable, the balloons smooth out the ride on the 401, and float over the grooves and ruts carved in the pavement. They also dampen sharp lane changes, tolerating aggressive moves without the accompanying sway and yaw that similar maneuvers would elicit from duals.

Early one morning, heading eastbound past Napanee with a hard westerly wind blowing, a snow squall and deep freeze had turned the 401 to the colour of polished white marble, and slicked it up like a curling rink for 50 hellish kilometres on the other side of Belleville.

I was doing about 80 km/h thinking these rubbers are holding pretty well, when a “wiggle wagon” from another courier company slid by me in the passing lane.

This was a standard A-train configuration: drop-deck single-axle pup trailers joined by a coupler and pulled by a single-axle tractor (not enough rubber and too many points of articulation for my liking). I was going to holler at the driver on the CB to slow down when I saw the tractor twitch and then buck sideways. The ensuing twist rippled along the length of the joints. For a good long three seconds the driver over-corrected in a desperate battle of crack-the-whip as the trailers snaked side to side across the road.

What saved him (or her) from going around was the ditch between the lanes. There’s no median barrier on that part of the 401 near Deseronto, but there is a little dip, a sort of rounded grassy culvert in the summer. That tractor went into the ditch followed by its pups and disappeared in a cloud of snow. At least diving into the ditch had pulled the wagons straight again. An instant later, they popped up again in the hammer lane – at a much slower velocity but still going westbound, thank God – and somehow the driver managed to limp back onto the right shoulder.

The next week or so, I asked a few of that company’s drivers about the incident and no one had heard anything. Probably, if the equipment wasn’t damaged, the driver waited with white knuckles for a salt truck, replaying that movie a few times.

I’m not saying that the X-Ones kept me out of the ditch but they didn’t hurt any. Lots of bad luck on that stretch of the road that morning: a truck jackknifed going the other way blocking a lane near Shannonville, and a couple of SUVs landed on their roofs. At one point I felt that I was sliding off the convex top. But with a little throttle, the big paws dug in and straightened me out.

Another bad night in February, this time in wet, deep snow near Port Hope, I crept part way up the shoulder to the first exit and took a route through town, bypassing dozens of trucks spinning their wheels up the hill from the Ganaraska River. The tires were superb on the white stuff. And my colleague John Melo, who’s put 90,000 km on his X-Ones agrees.

“Pound for pound, in the snow they handle as good as any set of dual tires,” he says.

Michelin is the industry leader of the wide-base single although Bridgestone has developed its own Greatec technology, and Goodyear and Yokohama are busily getting their products on the market. The Purolator test units run on Michelin 455/55 R22.5 XDA-HTs for the drives and XTEs under the trailers, although a XZUS model is now available and provides a little more tread depth.

Purolator hauls light loads on 53-foot trailers, 13,000-15,000 lbs net would be what I was pulling to Montreal and back. But it has taken some trial and error to set the tire pressure right, according to another Boucherville driver, Anthony Gregory: “110 lbs was too hard and at 85 lbs they were all over the road – 100 lbs air pressure seems about right.”

That’s the same air pressure run by Challenger Motor Freight of Cambridge, Ont., which now has upwards of 30 sets of wide-base single tractors and trailers hauling general freight. While the Lacey Dalton Transport Group of Caledonia, Ont. which runs heavy loads of coiled steel into Michigan and Ohio (up to 135,000 lbs gross on four- and six-axle trailers), sets their tire pressures at 125-130 lbs.

Overall, the single wheel concept hasn’t caught on with the Canadian trucking industry, perhaps because of the predominance of duals and a reluctance to embrace change. Of course, there were some problems with the original models when they were introduced a few years ago. The first generation of ‘super singles’ were heavier, larger diameter and had a more rounded profile. According to Ron Madill, coordinator of vehicle weights and measures for the Ontario Ministry of Transport, “There was an agreement among pavement engineers that those tires were a cause of more pavement damages.”

This resulted in severe restrictions of single wheel axles to 6,000 kg per axle in most Canadian provinces with the exception of B.C., Ontario and Quebec. Ontario allows up to 9,000 kg on single tire axles which means most tandem tractor-trailers mounted on singles can operate at 80,000 lbs gross and run unfettered into the US and Quebec.

Fuel savings alone should dictate greater interest in the singles. Exact figures are hard to pin down but Michelin thinks that a converted tractor and trailer will save around 4% in diesel. For my part, the improved fuel economy was notable. Normally it takes about 220 litres for a 9200 International with a 330 hp Cummins to travel 590 kms between Boucherville and Etobicoke, Ont. With the balloon tires, the tanks would usually need 5-10% less fuel.

“But it’s where it should be for the kind of work we do. Even more important, though, is the weight saving issue which is critical for us. At 200 lbs per axle on a nine-axle configuration that’s significant,” he says.

So is there a downside to the fat single? Just one, suggests Maillet.

“If the roads are nasty and you’re running empty they can be trickier than running a set of duals.”

Anthony Gregory of PCL also has only one complaint.

“Backing up they’re not as good,” he says. “The sidewalls on duals are more forgiving and allow for more exact turning.”

My only negative experience was getting stuck on a slight shelf of ice in front of the Purolator load-out docks in Boucherville. I could have rocked it out if the tractor wasn’t an automatic. But 8 p.m. is the best time to get stuck at PCL because I had all kinds of help from people looking for chains and salt to get me out of their way.

One would imagine getting road service would be a problem but not according to Mike Henderson, fleet manager at LA Dalton. All Michelin service dealers seem to stock the big tires and changing them is not a big deal either. And Henderson says he’s getting 300,000-400,000 kms on X-Ones with regular rotations.

He also claims to have fewer blowouts and punctures, and can’t recall a blowout on a drive tire.

“But when a trailer tire blows, there usually is some body damage,” Henderson adds.

While driving, the possibility of a blowout occurred to me; that’s a lot of rubber if it ever rips apart. But Madill of the MTO is reassuring on the subject.

“The research we have seen suggests that blowouts are not of concern. If there is a blowout it does not create a problem, as far as driver control,” he says. “The onl
y concern with them (pavement engineers) is what happens with the pavements at these higher weights,” adds Madill. “And there is a national task force of all the transportation ministries where this issue is being looked at.”

Currently the MTO is waiting for test results conducted by the University of Waterloo on a test track last summer. If the results are favourable and the provinces can agree on a national standard, it might not be too long before wide-base singles become prominent on Canadian highways. And the dual wheel could become a historical artifact, like solid rubber tires and vacuum brakes.