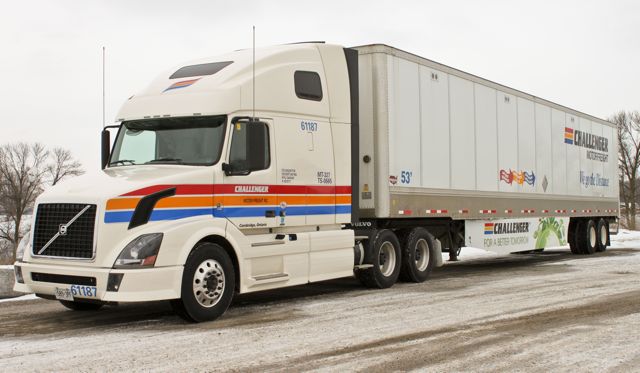 Challenger CEO Dan Einwechter says 'so far, so good' when it comes to the company's Volvo VN tractors with Volvo power featuring SCR.

Challenger CEO Dan Einwechter travelled to Europe to test SCR before committing to the technology.

“That really put my mind at ease about SCR,” Einwechter said. “I am now firmly in the SCR camp. The alternative solutions are unacceptable to me.”

Volvo has promised fuel savings in the neighbourhood of 5% compared to EPA07 models.

“While the long term journey has to be assessed, so far the Volvo EPA’10 engines have been above and beyond what we anticipated,” Einwechter said. “Volvo told us that we would have good engine performance, that the fuel economy would improve and that the use of Diesel Exhaust Fluid (DEF) would pose no problems, even in the very cold temperatures we have in Canada. Volvo said it, and we experienced it. We’ve had no problems at all.”

Challenger was sure to train drivers on the operation of the new equipment.

“We spent a lot of time with the teams that were driving the five initial trucks,” said Einwechter. “These early adopters spread the word and we’ve been fine with all our drivers.”

Volvo says it has already received orders for more than 25,000 trucks with Volvo SCR engines. The company says it was among the first to certify its EPA2010 products, which are the “most tested products in the history” of Volvo Trucks North America.