ATLANTA, Ga. – Diesel exhaust aftertreatment initially brought plenty of headaches to the trucking industry’s maintenance managers, but the systems have improved in reliability and fleets are now enjoying the fuel economy benefits.

Tommy Cottingham, director of maintenance and procurement with J.B. Hunt, said the fleet saw fuel economy increase by 14% since 2007. He was speaking during a panel discussion on sustainability at the Technology & Maintenance Council’s spring meetings. J.B. Hunt waited until 2013 to begin deploying trucks with selective catalytic reduction (SCR), which entered the industry in 2010, and saw further fuel economy improvements.

“We were late to the table,” Cottingham said of its SCR adoption. Between 2013 and 2018 the company has been replacing its trailer fleet.

“Every one of our dry vans are now equipped with skirts and low rolling resistance tires,” said Cottingham. “For a few years there, we saw a really good pickup in fuel economy.”

Spec’ing automated manual transmissions delivered another 1% improvement, and further gains were seen when the company adopted adaptive cruise control and incentivized drivers to use cruise by offering a higher top speed of 65 mph while in cruise.

Aerodynamics have also contributed to J.B. Hunt’s success. Trailer side skirts do incur damage at times, but Cottingham said the fuel economy gains overcome maintenance and damage-related costs. One aerodynamic option J.B. Hunt does not employ are low valence air dams, which are prone to damage.

The company continues to evaluate new technologies, and is currently looking at tire inflation systems, rear trailer aero devices, and wheel covers and fairings. When evaluating technologies, the company looks for an 8% return on invested capital, which generally ensures there’ll be an ROI in real world operating conditions.

John Vesey, a lease-operator with Hirschbach, urged fleets in attendance to not overlook the driver’s role in fuel economy, noting they can swing fuel economy as much as 30% in either direction.

“You want buy-in from your drivers,” he said. Vesey also emphasized the importance of relationships with vendors, and urged fleets to ask for third-party testimonials before committing to a technology.

C&S Wholesale Groceries, which runs about 1,000 power units, has smoothed out replacement cycles to take advantage of new fuel-saving technologies.

“A quarter of our tractors get replaced every year,” said Chris Trajkovski, vice-president. “We don’t have these peaks and valleys. We did the same thing with reefers and dry vans.”

Since 2017, C&S Wholesale Groceries has decreased its diesel consumption by 20%. It has also increased reliability and enhanced driver satisfaction.

“Stabilizing the fleet with a replacement plan was really key,” Trajkovski said.

Jacob White, director of product marketing at Peterbilt, urged fleets to work to reduce trailer gap for further fuel savings. He said most fleets run a 50-inch trailer gap, while 43 inches is optimal. Shortening the trailer gap from 50 inches to 43 produces a 1% fuel savings at highway speeds, White said, and it doesn’t cost a dime.

But, “the faster ratio will almost always be more fuel efficient over the road,” White added. 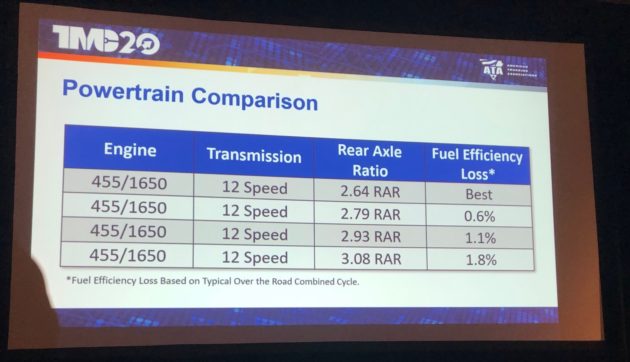