SAN ANTONIO, Texas — It takes some courage, some guts, some moxy and maybe a pinch of crazy, to take the best-selling pickup truck for nearly 40 years and to redesign it from the ground up, creating a completely new vehicle unlike anything the segment has seen.

But that’s exactly what Ford has done with its F-150, constructing an aluminum body to save weight, which will translate into increased payload and improved fuel-efficiency.

When Ford’s plan to build an aluminum F-150 was revealed, some observers reacted with shock and truckloads of cynicism. ‘Impossible,’ they declared, with visions of little Pepsi cans squished flat so easily beneath their heels. 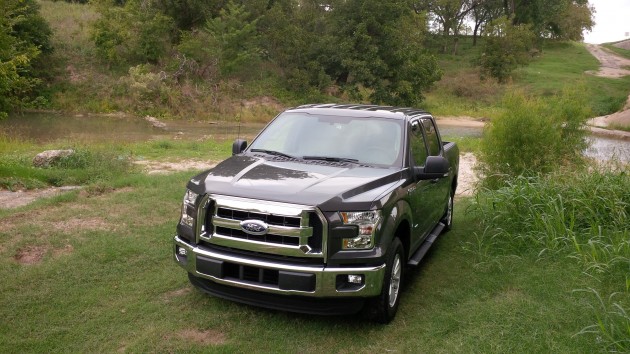 Those of us familiar with heavy-duty trucks were likely less skeptical. We’ve been driving trucks with aluminum cabs for years – including vocational trucks, which are deployed into environments every bit as punishing as anything the F-150 will encounter.

There’s an interesting back story behind Ford’s decision to go to an aluminum body. The company sought out some of its most abusive customers and then provided them with an F-150 with an aluminum bed to put through the paces in rigorous applications such as mining. These customers weren’t told the truck was constructed of aluminum and the only thing they noticed different about the F-150s they were using was that the paint scratches in the bed did not rust. Meanwhile, Ford studied these trucks to determine where further reinforcements were necessary and strengthened the bed accordingly.

The end result is a truck that weighs 700 lbs less than an all-steel F-150. That weight savings can be converted directly into increased payload, towing capacity or improved fuel mileage.

However, the aluminum cab is just one aspect of a thoroughly redesigned vehicle that sets new benchmarks in many categories.

One part of the truck that hasn’t been converted to aluminum is the frame, which Ford officials say is their strongest frame ever. It features an eighth cross-member, one more than in previous designs, and 78% of it is built from 70,000 psi high-strength steel, up from 23% in the previous F-150. This provides a weight savings of about 60 lbs as well as a more robust design.

Evidence that Ford redesigned its F-150 with its customers in mind can be found everywhere on the vehicle. The tailgate can be locked or lowered automatically using the key fob. An LED flashlight is embedded into the tailgate and new, forward-facing cargo box lights illuminate the entire box, providing nighttime visibility even when the bed is covered. 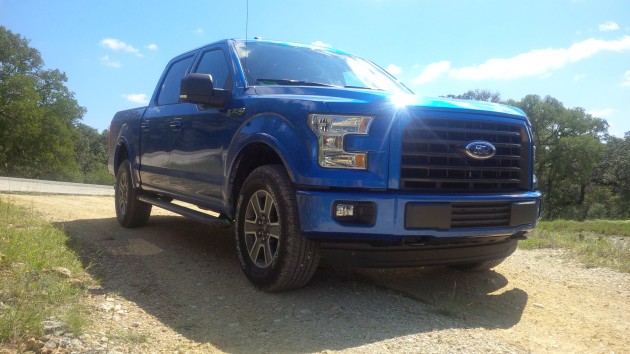 The tailgate step has been more cleverly integrated into the tailgate, making it invisible when not in use.

Up front, Ford has gone to a hard button keypad entry system that can be used while wearing work gloves. It sits at eye level for easy access and visibility. The door handle has been enlarged so that it can be easily opened with gloves on. The LED headlights, with accent lighting around the edges, are stylish and distinctive. This truck will stand out even when it’s dark out.

But it’s the interior where the F-150 has been vastly upgraded with many new features drivers will enjoy every day. The interior is now two inches wider, providing a larger center console with tons of storage and power plug-ins – including 110-volt, 12-volt and USB. The beltline has been lowered by an inch, providing greater visibility out the side windows and a more comfortable ledge upon which to rest your arm.

More storage can be found throughout the interior, and Ford has retained the flat floor in the rear, providing a better fit for bins and tools. The driver display has nearly doubled in size, to eight inches. And a new My View feature allows the driver to select up to seven items for display there – anything from trip fuel mileage to tire pressures. This level of dash customization is sure to please drivers, as everyone has different priorities and preferences.

The backup camera features a new Dynamic Hitch Assist, which helps guide the driver precisely into position to hook onto a trailer. I pulled a 9,000-lb trailer behind the new F-150 and was pleasantly surprised with the handling. Immediately after, I pulled 7,000 lbs behind a Ram and found it to be a handful, which can be attributed to its coil spring design that provides a comfortable ride unladen but hinders performance while towing.

“We have a choice for every customer, whether they’re a fleet or a commercial-oriented customer or a personal recreational use customer,” said Doug Scott, group marketing manager, Ford Trucks. 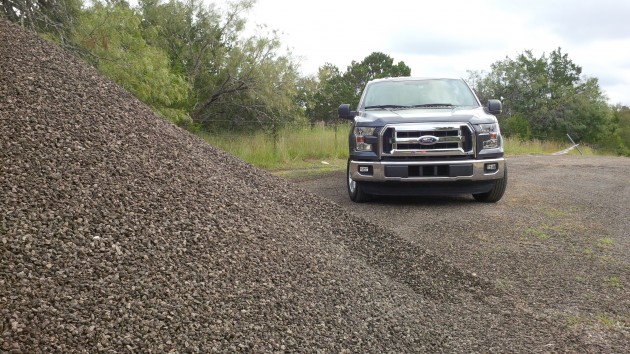 The 2.7L is a high-performing, yet fuel-efficient engine that is ideal for customers who don’t need to max out their payload or towing capacity. A lengthy drive in south Texas saw us achieve well over 20 mpg with this engine, unloaded. The reduced weight of the truck was also noticeable from behind the wheel, especially while cornering. The new F-150 feels more nimble and sporty.

Visibility out the side windows is greatly enhanced thanks to the lowered beltline, especially at the front of the window where it drops further. I also appreciated the view over the hood, which is excellent thanks in part to the indented center section of the hood, a stark contrast to the Ram, which has a raised center section that impedes forward visibility.

Ford claims the new F-150 will deliver fuel-efficiency improvements of 5-20% compared to the previous version, thanks in no small part to the 700-lb weight reduction. However, its EPA certifications won’t be available until November.

“We expect this all-new F-150 to have fuel economy that’s at least 5% and up to 20% better across the entire lineup,” O’Leary said. “That’s every model, every engine; every customer is going to benefit from the significant weight savings we’ve achieved.”

Of course naysayers will continue to question the aluminum body’s ability to withstand the abuse a commercial pickup, especially, will endure. Ford has done 10 million miles of testing on this truck – two million miles more than its previous F-150. The new 2.7L EcoBoost engine (and unbeknownst to competitors at the time, the aluminum cab) was run in the Baja 1000, where it performed faultlessly. The truck has been in development for nearly five years, giving Ford the confidence that it’s durable enough to handle anything that’s thrown at it. The company pointed out 6022 aluminum alloy is actually twice as strong as bake-hardened 280 steel and the box floor and body panels are actually thicker than before, while still providing a weight reduction.

What’s really exciting for customers – especially commercial customers – is that every pound taken out of the F-150 can be converted into improved productivity.

“When cars have gone to lightweight materials, some of them haven’t even lost weight; they’ve just replaced the material with more modules and more technology,” pointed out Pete Reyes, F-150 chief engineer. “The truck is the right place to do it because you can reinvest that weight savings right into the work of the truck…We take the weight out and reinvest it back into the capability of the truck.”