KELOWNA, B.C. – It’s a utility vehicle a mudder can love. That’s the impression Mercedes-Benz gave media attendees at its fascinating introduction to the new 4×4 Sprinters, an event at which the company made it clear that neither rain, sleet, snow nor even deep and wet mud can prevent the vans from performing their appointed rounds.  Maybe Canada Post bought their letter carriers the wrong vehicles.

Mercedes-Benz says the 2015 Sprinter is the only 4×4 commercial van available in Canada and they went out of their way to show us how important that 4×4 feature can be to owners, depending on their territory and duties. The demo began at Kelowna airport, where a line of Sprinter 4x4s – some of which were so new they were pre-production models – awaited the assembling writers. We were assigned to vans two by two, like Noah’s menagerie, and sallied forth from there to the city of Revelstoke, a journey of up to two-and-a-half hours, depending on traffic and lead-footedness. 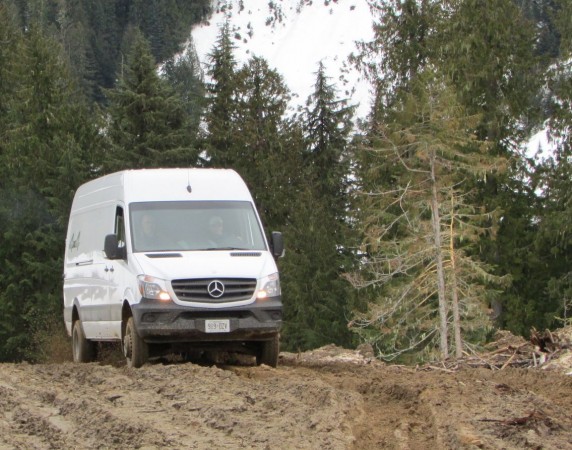 In town and on the highway, the Sprinters turned out to be surprisingly driveable. One shouldn’t expect sports car performance, but between the 3.0L V6 BlueTEC turbo diesel’s 188 horses and 325 lb.-ft. of torque, its efficient five-speed automatic transmission (with a decent manual mode that’s handy when descending hills) and a centre of gravity that seems lower than a tall van has any right to be, the vehicles handled the twisty bits of asphalt with aplomb. The highway sections were performed in the vans’ default rear wheel drive mode, but the Mercedes-Benz folks had a nice 4×4 whammy up their sleeves on day two of the event:  we took the Sprinters some eight kilometres up a snowy, bumpy and, ultimately, extremely muddy and rutty logging road that was a good test of the vans’ mettle.

Sprinters are available in a variety of configurations and capabilities, and the samples on hand included fairly Spartan versions you could retrofit to handle just about any type of cargo – or maybe even configure as a camper van – to 12-passenger versions that, while a tad less stable on the highway than the others (perhaps because of the air conditioning unit on the roof), seemed ideal as a customer shuttle or for touring businesses. The vans are also available in 2500 and 3500 versions, the latter of which offers more robust payload capacity as well as dual rear wheels.

According to Curtis Calwell, product manager for Mercedes-Benz Canada, the 4×4 Sprinters are designed to be popular with customers who might have been amenable to the vans’ charms, but who couldn’t take them all the way to work.

“There are a lot of those customers where it’s mandated they have 4×4 on whatever vehicle they’re going to have on-site,” he said. “Even if they’d love to have a Sprinter, they have to park them off-site and then truck in their tools or whatever else they need. This is going to really help them with a complete solution where they can have their workshop, everything they need, and drive it right on-site.”

He envisions the vehicles being popular at such places as the oil patch, construction sites, mines and wind farms. 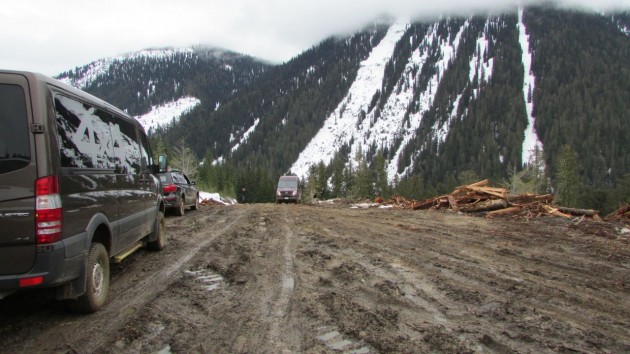 Calwell said the company has always promoted the Sprinter as having four pillars: comfort, safety, efficiency and functionality, saying “We feel that offering a 4×4 (version) really kind of satisfies all those pillars that we believe in with the brand.”

After having driven Sprinters for hours at a time, I can attest to the comfort part; the seats up front are nicely supportive, the driving position is flexible (thanks to a tilt/telescoping steering column) and the big outside mirrors include a convex portion that’s great for helping keep the Sprinter between the lines on the road. A back-up camera would be nice, especially on the versions with no rear windows, and it’s available as an optional add-on.

The 4×4 Sprinters offer up to 20% more traction than the rear drive models, but the cargo volume and towing capacity are nearly the same.

“There’s not a lot of trade-off,” Calwell said. “You get the added functionality but you don’t lose the capacity you’re looking for in a Sprinter.”

He noted the 4×4 technology adds about 270 lbs (most of which is up front) to the vehicle’s weight compared to the rear wheel drive version, and the 4×4 bodies are about three inches higher at the rear and nearly four inches up front. Axle heights are the same in both versions, however.

“What this does is increase some of the approach angles, the breakover angles,” Calwell said. “They’re all improved by about 10 degrees, and the wading depth, for those who are going to take it through a shallow creek, is improved by about five inches.” 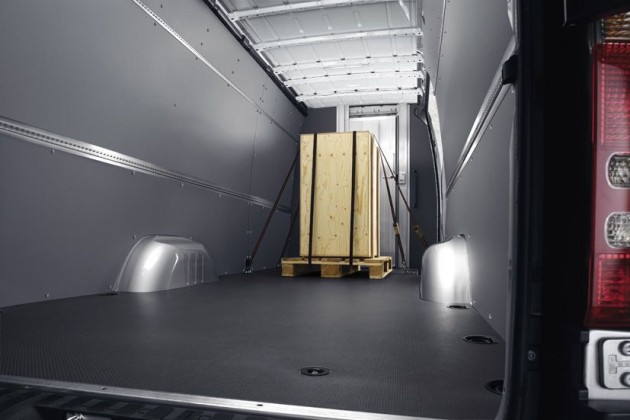 The actual ground clearance, at about eight inches, is the same in both versions. “The body is lifted but the actual driveline isn’t changed,” Calwell noted. The 4×4 Sprinters do have a slightly smaller fuel tank (93 litres versus 100), however.

The company refers to the Sprinters as 4×4, as opposed to the 4MATIC moniker it puts on its passenger cars and SUVs, because the systems are different.

“On the 4MATIC, the customer has no way of turning it on and off,” Calwell said, “but you have to activate it with the Sprinter, which we think will be good for commercial customers because when they don’t need it they’re saving a bit of fuel.”

The 4MATIC system also features a limited slip centre differential and variable torque split between front and rear axles, whereas Sprinter 4x4s have a fixed torque split of 35:65 front/rear. It also has no mechanical locks, which Calwell said helps keep the system light weight.

“We’ve kept it pretty simple,” he said. “It’s really just a differential, transfer case and a few extra parts.” The system is basically an extension of Mercedes-Benz’ Adaptive ESP system – its Electronic Stability Program – which monitors vehicle load status continuously to “ensure the proper amount of intervention in critical situations.”  The system is activated via a button on the instrument panel, and the vehicle has to be moving below 10 km/h.

The 2500 series comes standard with a new Crosswind Assist feature (which isn’t available currently on the 3500 models) that’s activated at speeds over 80 km/h and uses the ABS to help ensure the vans don’t behave like big sails when things get blustery. It shuts off if there’s steering input, however, which Calwell said is so “you won’t have a problem where it brakes too much, you go to correct as well, and then drive off the road.”

Mercedes also makes available as options the kind of nanny aids that are becoming popular on passenger cars these days, such as blind spot, lane keeping and high beam assists as well as collision prevention. There’s also a low range feature that can be engaged manually via a button on the dash when the vehicle is stationary. Customers can also add Downhill Speed Regulation (DSR) to the low range option. It’s push-button activated and works like cruise control, letting you set it at speeds between four and 18 km/h.

Mercedes-Benz has also extended the service interval for 2015 Sprinter vans to 30,000 kilometres. For now, the only engine choice is the 3L diesel.

“It was kind of a choice thing,” Calwell said. “When you’re bringing something new in there’s a lot of testing that has to go into it. It’s not to say we won’t offer another engine, but to launch it we had to make some decisions.”

There are no government fuel economy numbers available for the diesel Sprinters, but Calwell said owners can expect decent efficiency, citing data culled from real-world testing conducted in conjunction with the multinational wind farm company Enercon.

“In the rest of the world they use Sprinters, but (in North America) they had to use pick-up trucks,” he said, “so we delivered a van to them and for the last year they’ve been running it with a GPS uplink system tied straight into our engineers in Germany.”

He said Enercon achieved 12.53 litres per 100 kilometres in its real-world trials using fully loaded vans, “not cruising on the highway with an empty van.”

I came away from the demo quite impressed with the Sprinter 4×4’s performance. Our caravan of utility vans didn’t exactly “sprint” up the mountain logging road during that part of the demonstration, but our eight kilometre crawl up and down and over the hills took us through puddles and snow and loose sections where the Sprinters were bottoming out repeatedly, yet they handled the intimidating conditions beautifully. Mercedes’ sample Sprinters didn’t have a lot of creature comforts on them other than Bluetooth, but you can order others if you want. A $2,450 luxury interior package, for example, adds stuff like extra insulation and an overhead control panel with two reading lamps, while the convenience package ($670) adds a multifunction steering wheel with trip computer, a 12-volt power outlet in the driver’s seat base, a lockable glove compartment, a hinged lid for the center console storage bin, two extra master keys, an upgraded instrument cluster and cruise control.

I had minor issues with the mounting of the cruise control and signal light/windshield wiper stalks, which extend from the steering column at about 10 and eight o’clock respectively. It’s something you’d get used to fairly quickly if you were using the Sprinter every day, but I found myself hitting the cruise control at times when I was trying to signal a turn. This is a holdover from how Mercedes-Benz did it on its cars and SUVs in the past, though they’ve now changed it to reflect the more “mainstream” layout so perhaps this will be revisited in the Sprinter’s future as well. This wouldn’t come close to being a deal breaker were I shopping for such a van, however.

Sprinter 4x4s are on sale now at Mercedes-Benz dealers, production having begun in Germany this past January. Prices start at $49,900 Canadian (the passenger van version starts at $57,300), which is about $6,000 more than the rear drive versions. That may seem like a bit of a premium in this niche, but these are, after all, the Mercedes-Benzes of commercial vans. And that, said Calwell, is their ace in the hole. “The main differences are residual value and fuel costs over the life,” he said. “It really depends on the use. If you’re going to be putting a lot of kilometres on it and keeping it for a long time it keeps making more and more sense.”