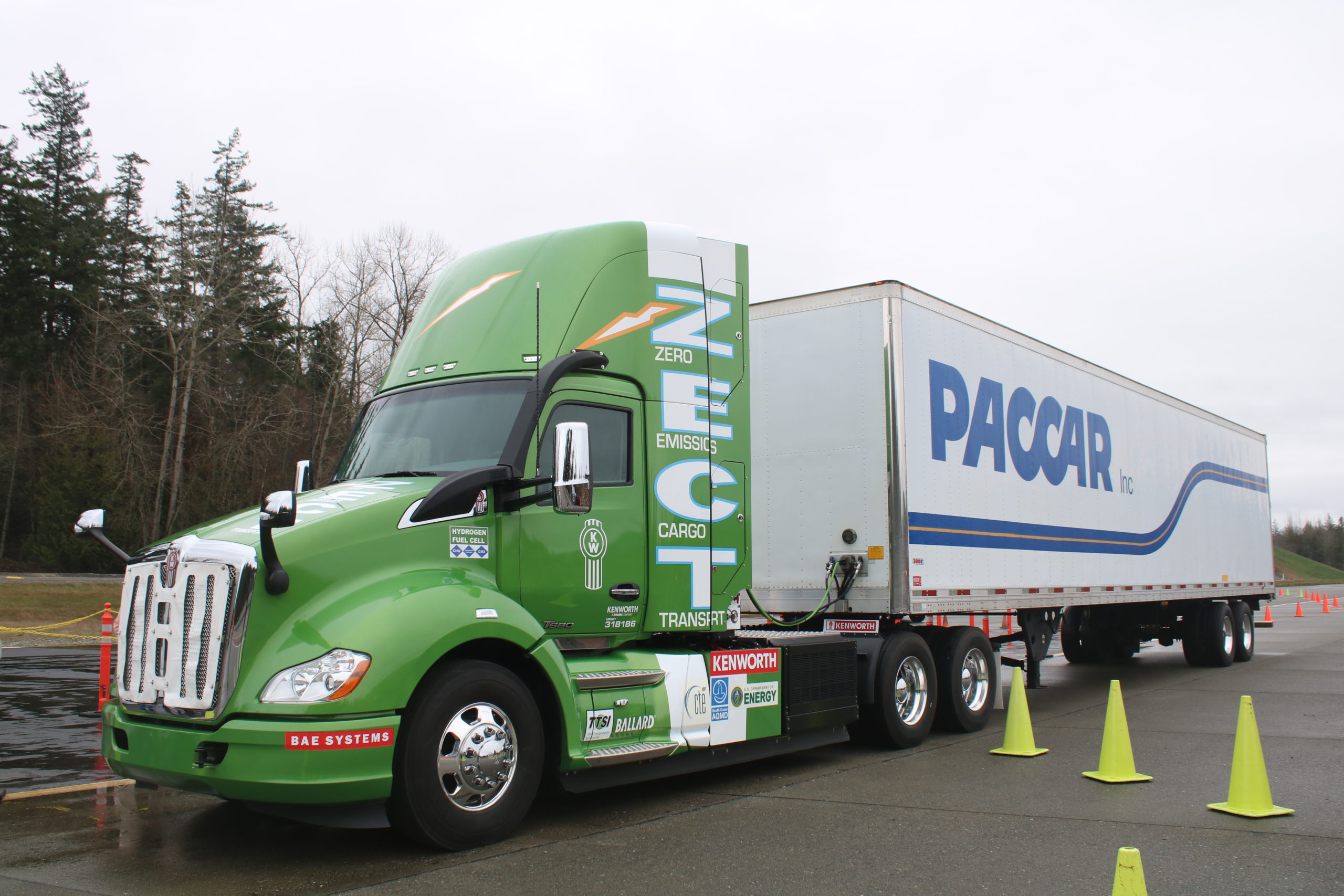 Kenworth has removed the black shroud from its latest green initiative, the Zero Emissions Cargo Transport (ZECT). The heavy-duty truck is a hydrogen fuel cell powered battery-electric vehicle, capable at this point of about 160 kilometers of travel fully loaded. Kenworth plans to increase that in the future with the addition of greater hydrogen storage capacity.

The truck produces no emissions other than a small column of steam when the hydrogen fuel cell stack is charging the batteries. It makes no noise other than the cooling fans and the air compressor. It’s truly a vehicle that will fit comfortably into any urban environment, especially those areas where air quality is a concern. This truck will be deployed at a Los Angeles-based port drayage company, Total Transportation Services (TTSI) at the end of March, working at the ports of Los Angeles and Long Beach, Calif.

The truck was first shown at the Consumer Electronics Show in Las Vegas this January. It has been in the works for just a few months and was actually run for the first time in December. Kenworth took the unusual step of inviting the trade media to see and drive the truck even though it is very much in the prototype stage.

There were a few hiccups during the day’s ride and drives, but as Kenworth’s research and development manager, Brian Lindgren, reminded reporters, it’s a prototype; it’s still really early in the development process.

“We have another four to six weeks of testing planned here at the Technical Center before we take it to Los Angeles,” Lindgren said. “By then we fully expect it will be ready to haul loads in the real world.”

Funding for the development of the truck comes through the Department of Energy’s office of Energy Efficiency and Renewable Energy, under the funding plan for zero-emissions cargo transport initiative, as well as the South Coast Air Quality Management District and the California Air Commission. The Center for Transportation and the Environment brought together Kenworth and the major system suppliers to complete the project.

The powertrain on this truck is scaled for short-haul service, working at a drayage facility where it will run 50-80 kilometers per day. Consequently, it has a fairly small hydrogen storage capacity and batteries that can comfortably deliver speeds in the 50-80 km/h. It will go much faster, according to Lindgren, but it’s limited to some degree for the testing phase.

“Our motors are rated at 420 kW or about 565 horsepower at a constant rate, but they will peak considerably higher,” he said. “We are limiting the output to about 300 kW until we prove out the systems.”

The range of the truck is limited by the hydrogen capacity. It has 100 kWh of capacity with about 80-90 kWh that’s usable. It takes about 2 kWh per mile to move the truck down the road, and 70% of the battery’s capacity would run the truck about 110 kilometers. The present battery pack weighs about 5,000 pounds.

The system works by using the stored hydrogen to produce electricity to charge the battery pack. While there is some regenerative braking capability, the hydrogen fuel cell will come on and produce voltage to charge the batteries when the voltage drops below a certain level. It does not run all the time. When the hydrogen is depleted, the truck is no longer capable of generating electricity. It can also be cable charged, but that’s not as efficient as the fuel cell, Lindgren noted.

The name of the game with this truck is zero emissions. A natural-gas-boosted battery-electric system would get you near zero, but that’s not the goal.

“The only way to get to zero is with all-battery or with hydrogen fuel cells,” Lindgren explained. “We think for heavy trucks, battery electric has some challenges. The batteries are heavy and expensive, they have to be recharged and that takes time. This truck represents a good compromise between battery capacity and weight (5,000 pounds), charging time (none, it charges on the go), and the cost of the system. On every front, this truck meets all the industry criteria for a viable truck in this application.”

We had a chance for a short drive on the truck, both on the test track at the Technical Center and out on the public roadways around the center.

It’s totally quiet except for the cooling fans, the compressors and the various pumps on board, as well as a soft whine from the gear train. The torque at launch is something to behold, and I suspect engineers will have to find some way to limit that, lest the drivers peel the treads off their tires.

The truck was loaded to 79,980 pounds, and at launch it felt as though it was a quarter of that weight. You have absolutely no sense of the weight of the load when you have that much torque under foot. So, other than the immense torque and the total lack of engine noise, there was no fundamental difference between this truck and one equipped with a 500-horsepower diesel.

The transmission was a modified Eaton 18-speed automated manual transmission. It used just the high/low splitter and the range splitters from the back of the 18-speed. Other than that, the gear box was empty; modified actually, to mount to the motor and the standard prop shaft we see on any transmission.

“We’re not sure about the transmission yet,”  Lindgren said. “We are thinking three gears will give us the flexibility we need to optimize the efficiency and performance of the motor, and thus power usage. We are using four gears now, but the top gear probably isn’t necessary.”

When this truck launches officially in March, it will put a lot of the naysayers back on their heels and put a great big grim on some drivers’ faces. They won’t be expecting performance like this from an electric truck.

Jim Park was a CDL driver and owner-operator from 1978 until 1998, when he began his second career as a trucking journalist. During that career transition, he hosted an overnight radio show on a Hamilton, Ontario radio station and later went on to anchor the trucking news in SiriusXM's Road Dog Trucking channel. Jim is a regular contributor to Today's Trucking and Trucknews.com, and produces Focus On and On the Spot test drive videos.
All posts by Jim Park
Print this page