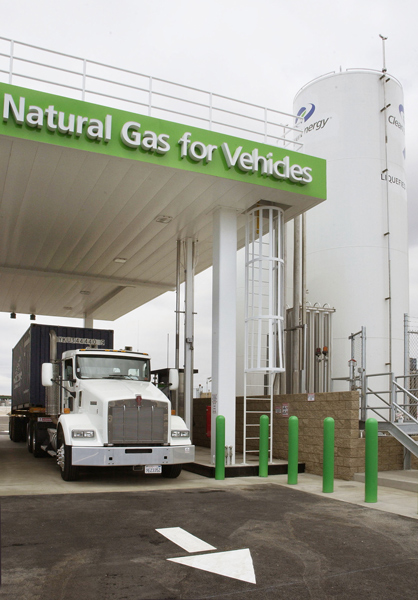 TORONTO, ON – The Ontario Trucking Association wants the provincial government to offer up to $60,000 per natural gas vehicle in a bid to offset purchase prices that are higher than diesel equipment — but it’s also asking funders to consider more than vehicle and fuel station costs alone.

The typical rollout of a mid-sized natural gas fleet can cost $68,000 in management or consulting time, according to Natural Gas as an Alternative Fuel for Canadian Truck Fleets, a white paper commissioned by the association. Simply evaluating the alternatives can take anywhere from 200 to 500 hours. Another $19,500 would be needed to track any deployments, gathering the data needed to support future investments.

“Ancillary” fees such as management time and evaluation, training, monitoring, and shop upgrades all add to the related investments, the report concludes. Training, for example, might cost $2,000 per technician and $200 per driver.

“Trucking companies are in the business of moving freight. We are not fuel transition experts. The more the Government of Ontario’s program assists the industry in making a seamless transition to natural gas, the greater the likelihood the program will be successful,” said Stephen Laskowski, president of the Ontario Trucking Association. “Ancillary expenses can make up to 10% of the overall cost of switching to natural gas vehicles. Without assistance and funding in these critical areas, fleets can easily become frustrated, making a successful conversion to natural gas vehicles less likely.”

Ontario has pledged to invest up to $8.3 billion in low-carbon technologies over the next four to five years, using funds from the carbon tax that begins January 1. About $250 million is committed to reducing carbon emissions from heavy trucks. And natural gas vehicles produce less carbon than their diesel counterparts. The Canadian Natural Gas Vehicle Association estimates that, when total lifecycles are considered, natural gas reduces carbon emissions by 20-25% when compared to conventional transportation fuels.

Natural gas is also sourced domestically. Canada already accounts for 5% of global natural gas production, largely from British Columbia, Alberta and Saskatchewan. By 2040, the National Energy Board estimates that provincial sources will produce nearly 18 billion cubic feet of the fuel every day.

“Upfront investments in fleet conversion from diesel to CNG [Compressed Natural Gas] can be significant, but can also reap significant benefits over time,” the Ontario Trucking Association’s report concludes. According to one example, a fleet of 20 Compressed Natural Gas vehicles that each travel 160,000 kilometers per year could realize a payback in three years because of the gap between diesel and natural gas prices.

But there’s no denying the higher upfront purchase costs for the equipment itself.

American Power Group offers conversion kits for diesel engines, adding about $20,000 to $40,000 to equipment prices depending on tank sizes and configurations.  Dual fuel kits like these are particularly important in Canada, the report adds, citing the lack of a 15-liter Compressed Natural Gas engine from Original Equipment Manufacturers. Smaller-displacement engines including the Cummins Westport 11.9-liter ISX 12G and 8.9-liter ISL G can cost $10,000 to $25,000 more than an equivalent diesel engine. But the “near zero” version of the ISL G generates NOx emissions that are 90% lower than the legislated limit of 0.2 g/bhp-hr.

Suppliers including Agility Fuel Systems, Momentum Fuel Technology, and Quantum Fuel Systems offer the equipment to hold the fuel itself. Available systems can store more than 180 Diesel Gallon Equivalent (DGE) of fuel, offering a range of about 1,500 kilometers.

A growing network of fuel stations – particularly those that offer fast-fill capabilities – have helped Compressed Natural Gas offset advantages once held by Liquefied Natural Gas, which has traditionally been seen as the best option for over-the-road trucks and their longer routes, the report says.

Drawing on natural gas stored at 4,300 psi, a fast-fill station can fuel a Compressed Natural Gas vehicle in about the same time as it takes to fill a diesel tank.

But the fueling opportunities themselves are limited. At this point, Ontario has just six natural gas fueling stations open to the public. There are 1,600 Compressed Natural Gas stations across North America, including 80 public fueling stations in Canada. Many sites are privately controlled.

The cost of establishing a fueling station depends on the size and number of compressors, which will be dictated by estimated demands for peak times, the existing location of natural gas utility lines, property costs and access. Local operating authorities can introduce unique requirements of their own.

Recently opened fast fill stations have been built for between $2.1 and $2.7 million, not including the price of the land itself, the report says. Once operating they can typically run about 98% of the time with maintenance support from Technical Standards and Safety Authority (TSSA) technicians, to help ensure fuel is properly dried, filtered and compressed.

It’s a cost that can be shared between fleets and station operators. “Not all Class 8 fleets will elect to build their own stations, choosing instead to rely on public fueling stations. Nonetheless, fleets who choose to use public stations can pay close attention to pricing and contract provisions – negotiating for pricing concessions based on volume commitments, assured fuel quality, and suitable accommodations during station outages,” the report says.

Upgrades to a traditional service bay can cost another $50,000 to $100,000, to ensure an operation is ready to work on natural gas vehicles. Unlike a diesel leak, which would pool on the floor, leaking natural gas will rise to the ceiling. That means wiring needs to be moved at least 18 inches from the ceiling to eliminate spark points. Furnaces might need to be moved, and gas alarm systems will need to include methane detection. Fans and automated overhead garage doors will need to quickly open if methane levels rise to a certain point. Other requirements include sources of makeup air and two-hour fire walls.

But one of the most important things to build may be the business case itself.