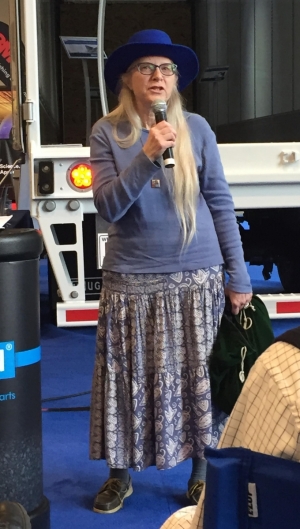 Standing in front of one of the redesigned underride guards that the company has made a standard offering on all of its van trailers, Marianne Karth described the May 2013 crash that brought her to the annual meeting of the Technology and Maintenance Council.

Her Crown Victoria was hit by a tractor-trailer and sent spinning backward into the rear of a second trailer. The underride guard detached. The car slid underneath. Her 17-year-old daughter, AnnaLeah, was killed instantly. Her 13-year-old daughter, Mary Lydia, died a few days later.

First she showed journalists a hand-made dress that was never worn. Then she held up a pair of braids that were cut off by an emergency room nurse in the frantic hours after the crash. “That’s what I have of Mary,” she said with a quivering voice.

Karth had never heard of underride guards before the crash. Never gave them a second though. Now she is championing a call to require tougher standards, like the guards developed by Stoughton.

Between 2004 and 2014, 2,205 people died in underride crashes in the U.S. Even guards that meet federal safety standards established in 1998 have been shown to crumple at the outside edges. The Insurance Institute for Highway Safety tested the approved guards used by eight trailer makers in 2011. None could stop the test cars from running underneath during what is known as a 30% offset crash at about 55 kilometers per hour.

“Stoughton decided we were going to take action,” said Gary Fenton, vice president engineering. “We needed to provide for a non-underride condition and also do so with a mind to energy absorption.”

The model the company developed essentially adds two additional supports, each mounted near the side of the trailer. It also managed to do so without adding weight or cost, and has been installing them on new products since November 1. Retrofits are available for trailers built in the last 10 years.

“Safety should not cost our driving public,” Fenton adds.